Upper urinary tract urothelial carcinoma (UTUC) accounts for ~5% of all urothelial tumors and 10% of all renal tumors (1). Since the disease recurrence and progression rates are high in patients with UTUC (2), an improved understanding of the prognostic parameters may lead to the identification of patients who may benefit from intensified therapy and monitoring.

The classical risk factors for the development of UTUC include smoking, abuse of analgesics, chronic urinary tract infection, urolithiasis and oncological agents, such as cyclophosphamide (3). A significant prognostic factor of UTUC is the disease stage. The five-year survival rate for low stage tumors is ~90%, which decreases to <30% in cases of regional nodal metastases and to <10% in cases of distant metastases (4).

To date, several contemporary, single-center studies of patients who were treated with radical nephroureterectomy (RNU) for UTUC have been published (5–9), and several risk factors for developing UTUC have been reported, including a delay in the RNU (10) and tumor necrosis (11). Although the studies have largely contributed to our understanding of the disease, they were limited by small and heterogeneous populations. To overcome this limitation and to improve our understanding of the natural history of UTUC, a comprehensive database [the Upper Tract Urothelial Carcinoma Collaboration (UTUCC)] incorporating the clinicopathological characteristics and outcomes of >1,300 patients treated with RNU for UTUC at 13 academic centers worldwide was created in 2008 (12). It was concluded that an RNU provided durable local control and cancer-specific survival (CSS) in patients with a localized UTUC, and that the pathological tumor grade, T stage, lymph node status, tumor architecture and lymphovascular invasion (LVI) were significant prognostic variables that were associated with oncological outcomes, which may potentially be used to select patients for adjuvant systemic therapy.

The present study was a retrospective analysis of 153 consecutive patients with UTUC, who underwent surgery between 1996 and 2009 at Hirakata City Hospital (Osaka, Japan). Of the 153 patients that were screened for the study, 103 patients were included in the analysis. The inclusion criteria consisted of a diagnosis of non-metastatic UTUC (any T stage, N0–1 and M0) and receipt of an RNU with an ipsilateral bladder cuff as the primary treatment. No patient had an invasive bladder tumor (BT) at the time of the RNU. Written informed consent was obtained from the patient. This study was approved by the ethics committee of Hirakata City Hospital (Osaka, Japan).

In the past, open RNU using an open excision of the distal ureter with a bladder cuff has been performed to dissect the kidney, with the entire length of the ureter and an adjacent segment of the bladder cuff. From June 2003 to date, the approach that has been used is one of conventional four-trocar nephrectomy. Once the nephrectomy is completed, the ureter is dissected and the intact specimen is moved into the pelvis. Next, a semi-Pfannenstiel incision is made in the lower abdomen, which assists in retrieving the specimen, eases the dissection of the lower ureter and facilitates the excision of the bladder cuff. The hilar and regional lymph nodes that are adjacent to the ipsilateral great vessel are then resected, if possible.

The following clinical and pathological variables were evaluated: Gender, age, tumor side, presence of a BT at diagnosis, serum level of C-reactive protein, hemoglobin, histological type, pathological grade, adjuvant chemotherapy, microvascular invasion, lymphatic invasion, urothelial recurrence, non-urothelial recurrence and pathological stage (2002 TNM system). The tumor grading was assessed according to the 1998 World Health Organization/International Society of Urologic Pathology consensus classification (13). All surgical specimens were processed according to the standard pathological procedures at the Hirakata City Hospital. UTUC was defined as a urothelial carcinoma located in the renal pelvis or calices, as well as tumors located within the ureter. C-reactive protein was pre-operatively obtained from the blood of the UTUC patients and collected in a serum-separating tube. The C-reactive protein level was expressed in units of mg/dl. Microvascular invasion was defined as tumor cells in an endothelium-lined space observed using routine light microscopy in whole-mounted UTUC specimens. The oncological follow-up schedule included a physical examination, cystoscopy and CT imaging between the chest and pelvis twice per year during the first five years and annually thereafter.

The continuous parametric variables were reported as mean ± SD and range. The continuous non-parametric variables were presented as median values and interquartile ranges. The F test was used to assess whether the standard deviations of two populations were equal. χ2 tests were conducted to assess the differences in the covariate distributions between the urothelial and non-urothelial recurrence categories. CSS was defined as the primary endpoint of the study. The survival interval was defined as the time elapsed between the surgery and the last clinical evaluation or cancer-specific mortality. Survival curves were estimated using the Kaplan-Meier method. The patients who remained alive or succumbed to other causes were censored. The log-rank test was used to compare the survival curves. A Cox proportional hazards regression model was used to verify the clinicopathological variables that independently predicted CSS. In all statistical analyses, a two-sided value of P<0.05 was considered to indicate a statistically significant difference. All data were analyzed using the PASW Statistics version 17 statistical program (SPSS Japan Inc., Tokyo, Japan).

Clinicopathological characteristics grouped by non-urothelial or urothelial recurrence in 103 patients treated with an RNU and ipsilateral bladder cuff for UTUC.

The univariate analyses using the clinicopathological characteristics, including C-reactive protein, hemoglobin, pathological grade, non-urothelial recurrence, microvascular invasion, lymphatic invasion and pT classification, were associated with the CSS. In the multivariate analysis for the clinicopathological characteristics, only non-urothelial recurrence was associated with a worse CSS (P=0.002, HR 9.512; Table II).

UTUC is a relatively rare malignancy. Although affected patients may benefit from endoscopic or nephron-sparing approaches, an RNU with an ipsilateral bladder cuff excision remains the standard treatment for patients with large, multifocal or high-grade tumors. However, despite definitive surgery, UTUC remains a malignancy with a high potential for local and distant recurrence, particularly in patients with advanced diseases (14). The outcomes of patients with UTUC following an RNU are heterogeneous and, therefore, difficult to predict. Multi-institutional collaborative studies have identified several potential factors that predict the outcome following an RNU for UTUC, supplementing the traditional pathological staging system (15–17).

The common locations for the spread of UTUC, depending on the site of the primary tumor, include para-aortic, paracaval, ipsilateral common iliac and pelvic lymph nodes. Hematogenous seeding also occurs in the liver, lungs and bone, which are common sites for metastases. Once a distant metastasis is diagnosed, the prognosis for the patient is extremely poor, in spite of chemotherapy. Certain publications suggest a benefit from the surgical removal of urothelial carcinoma metastases for a subgroup of patients (25). In a large German retrospective study, only 44 patients with distant metastases of the bladder or upper urinary tract underwent a complete resection of all the detectable metastases and were analyzed. The resected metastatic sites included the retroperitoneal lymph nodes (56.8%), distant lymph nodes (11.3%), lung (18.2%), bone (4.5%), adrenal gland (2.3%), brain (2.3%), small intestine (2.3%) and skin (2.3%). Pre- and/or post-metastasectomy systemic chemotherapy was administered in 35 of 44 patients (79.5%). Since no significant prognostic factors were determined due to the limited patient numbers, it was concluded that the metastasectomy in the patients with disseminated urothelial carcinoma metastases remained investigational and there are a limited number of disease types for which a combined-modality approach with systemic chemotherapy would be successful (26).

Lymph node dissection (LND) appears to have an impact on node-positive patients (27). In one previous study, 76 out of 293 patients developed disease relapse. Regional lymph node recurrence was the most common type of relapse (34 patients). In the multivariate analyses that adjusted for the effect of tumor stage and grade, pNx (skipping LND) was an adverse factor for locoregional recurrence and distant relapse (28). However, in the study by Lughezzani et al, which analyzed 2,824 patients from the Surveillance, Epidemiology and End Results (SEER) database, LND showed no benefit in patients with an N0 status compared with those with an Nx status (29). Roscigno et al suggested that LND should be performed in patients with suspected T2–4 stage diseases, to improve the prediction of the natural history of surgically treated UTUC and to use this information for possible adjuvant chemotherapy (30). Thus, the method of defining the right patient, LND template and the extent of the LND remains unclear. 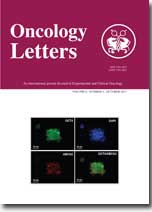