Merkel cell carcinoma (MCC) has only limited sensitivity to chemotherapeutic agents. The aim of the study was to determine if members of the anthraquinone family could be used as adjuncts to increase the growth inhibiting effect of anticancer agents in MCC. An adherent variant of MCC was derived from a previously established MCC cell line suspension. Cells were characterized by immunocytochemical methods using specific antibodies against epithelial (low molecular weight cytokeratins and cytokeratin 20) and neuroendocrine (neuron-specific enolase, neurofilament protein, chromogranin A and synaptophysin) antigens. Emodin and aloe-emodin, members of the anthraquinone family, inhibited proliferation of the adherent MCC cells, with a slight advantage of aloe-emodin over emodin. Aloin had no effect on cell proliferation. The chemotherapeutic agents, cis-platinol (abiplastin), doxorubicin (adriablastin), and 5-fluorouracil, and the tyrosine kinase inhibitor STI 571, all independently inhibited the proliferation of adherent MCC cells. The addition of aloe-emodin potentiated their inhibitory effect, especially when low concentrations of the anticancer compounds were used. The antiproliferative action of STI 571 may be associated with the presence of anti-c-kit antibodies. The combined use of anticancer agents, especially at low concentrations, and aloe-emodin may be considered a preferable means for treating MCC. 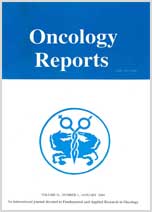