Expression of cyclin A in human leukemia cell line HL-60 following treatment with doxorubicin and etoposide: The potential involvement of cyclin A in apoptosis

We investigated expression of cyclin A in HL-60 cells after induction of apoptosis with doxorubicin and etoposide. Following apoptotic trigger, both cells arrested in G2/M phase of the cell cycle and changes in morphology were noticed. Moreover, compared to control, the number of cells with cyclin A expression was changed and translocation of this protein from the nucleus to the cytoplasm was observed. The decrease in the number of cells with cyclin A expression, followed by the increase, and cyclin A distribution throughout the cell, appeared to be dose-dependent. Cells treated with lower doses of doxorubicin and etoposide as well as the untreated cells were found to have cyclin A scattered mainly throughout the nucleus. However, immunogold labeling of cyclin A in both cell lines treated with 5- and 10-µM doses of doxorubicin, and 20 and 200 µM of etoposide was observed more often in the cytoplasm than in the nucleus. Cells with features of apoptosis with bodies resembling micro-nuclei labeled with gold particles for cyclin A were recognized. However, the small amount of giant cells was also seen. These results suggest that cyclin A expression is linked to cell death pathways. 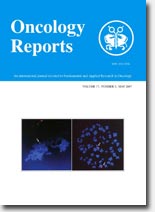