Sulforaphane (SFN) is an isothiocyanate that is found in abundant quantities in many cruciferous vegetables including broccoli and cauliflower. Its inhibitory effects on tumor cell growth in vitro and in vivo, which is dependent on the direct effect on cancer cells, has attracted considerable attention. This study examined the effects of SFN on the growth of human cervical carcinoma HeLa and hepatocarcinoma HepG2 cells. The results showed that SFN inhibits the viability of both HeLa and HepG2 cells by inducing apoptosis, as evidenced by the formation of apoptotic bodies and the accumulation of the sub-G1 phase. RT-PCR and immunoblotting showed that treating the cells with SFN caused the down-regulation of anti-apoptotic Bcl-2 and Bcl-XL, and the up-regulation of pro-apoptotic Bax expression. SFN-induced apoptosis was associated with the proteolytic activation of caspase-3, and the degradation/cleavage of poly (ADP-ribose) polymerase and the β-catenin protein. z-DEVD-fmk, a caspase-3 specific inhibitor, blocked the activation of caspase-3 and increased the survival of the SFN-treated HeLa and HepG3 cells, suggesting that caspase-3 activation is essential for SFN-induced apoptosis. 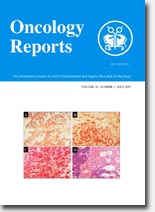