The classification of breast cancer into multiple molecular subtypes has necessitated the need for biomarkers that can assess tumor progression and the effects of chemopreventive agents on specific breast cancer subtypes. The goal of this study was to identify biomarkers whose expression are altered along with estrogen receptor α (ERα) in the polyoma middle-T antigen (PyMT) transgenic model of breast cancer and to investigate the chemopreventive activity of phenethyl isothiocyanate (PEITC). The diet of PyMT female mice was fortified with PEITC (8 mmol/kg) and the mammary streak and/or gross tumors and metastases in lungs were subjected to immunohistochemical analyses for ERα, FOXA1, and GATA-3. FOXA1 is associated with luminal type A cancers, while GATA-3 is a marker of luminal progenitor cell differentiation. In both control and PEITC-treated groups, there was a progressive loss of ERα and FOXA1 but persistence of GATA-3 expression indicating that the tumors retain luminal phenotype. Overall, the PyMT induced tumors exhibited the entire gamut of phenotypes from ERα+/FOXA1+/GATA-3+ tumors in the early stage to ERα±/FOXA1-/GATA-3+ in the late stage. Thus, PyMT model serves as an excellent model for studying progression of luminal subtype tumors. PEITC treated animals had multiple small tumors, indicating delay in tumor progression. Although these tumors were histologically similar to those in controls, there was a lower expression of these biomarkers in normal luminal cells indicating delay in tumor initiation. In in vitro studies, PEITC depleted AldeFluor-positive putative stem/progenitor cells, which may partly be responsible for the delay in tumor initiation. 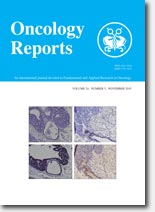