Medulloblastoma is the most common malignant tumor of the central nervous system in children. The insulin-like growth factor-I receptor (IGF-IR) is an important growth factor for medulloblastoma. The novel IGF-I receptor (IGF-IR) kinase inhibitor NVP-ADW742 has in vitro activity against tumors. Daoy cells were treated with NVP-ADW742 combined with temozolomide, which is commonly used in the chemotherapy of medulloblastoma. The effects on proliferation were assayed by CCK-8 assay. Cell cycle status and apoptosis were assayed by FACS analysis. The IGF-IR signaling pathway was analyzed by RT2 Profiler™ PCR arrays and Western blotting. NVP-ADW742 inhibited IGF-IR-mediated proliferation with an IC50 of 11.12 µmol/l. The PCR array data suggested that 14 genes were down-regulated at the mRNA level after NVP-ADW742 treatment. Western blot analysis suggested that NVP-ADW742 induced early suppression of Akt, P38 and GSK-3β phosphorylation, as well as a decrease in the intracellular levels of PI3K, Akt, P38, GSK-3β and Bcl-2. Combined with NVP-ADW742 (2 µmol/l), IC50 of Daoy to temozolomide was decreased from 452.12 to 256.81 µmol/l. Cell apoptosis was enhanced from 16.18±2.47% to 23.20±2.80%. G phase arrest was also found in both the temozolomide alone group and the temozolomide combined with NVP-ADW742 group. NVP-ADW742 inhibited the activation of PI3K, Akt, P38 and GSK-3β caused by temozolomide. NVP-ADW742 enhanced the chemosensitivity of Daoy to temozolomide in vitro, as a potent anti-tumor agent highly selective against IGF-IR. 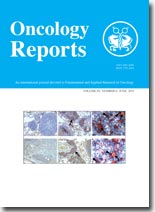