Liver cancer is the fifth most prevalent malignancy in men and the seventh in women worldwide (1). The incidence of liver cancer is increasing possibly due to the epidemic of obesity and the rise in hepatitis C virus infection (1). Current treatment for liver cancer includes surgical resection, liver transplantation, local ablation, transarterial chemoembolization and radioembolization, and targeted molecular therapy (2,3). Despite improved therapeutic methods, the curative outcome of advanced liver cancer patients remains elusive. Liver cancer remains the second leading cause of cancer-related death in men and the sixth in women (1). The overall 5-year survival rate of liver cancer patients has remained below 12% in the United States (3). Thus, there is a great need to develop novel agents or alternative strategy to treat liver cancer.

Curcumin is an important ingredient of Curcuma aromatica, and has been used as a quality control standard for Curcuma aromatica(10). Curcumin inhibits proliferation and induces apoptosis in numerous types of cancer cells including liver cancer (11). One of the major components of Polygonum cuspidatum is resveratrol (12). In addition to chemo-preventive activity against tumorigenesis, resveratrol exhibits anticancer effects against various types of cancer cells such as lung carcinoma, pancreatic cancer and hepatocellular carcinoma cells and inhibits cancer cell invasion and metastasis (13–18). Both curcumin and resveratrol have displayed synergistic effects with current cancer therapeutics (19,20). The combination of curcumin and resveratrol was found to demonstrate a synergistic anticancer effect in colon cancer (21). However, as constituents from paired-herbs, the combined effect of curcumin and resveratrol against hepatocarcinoma cells remains unknown. In the present study, we evaluated the anticancer effect of curcumin combined with resveratrol in hepatocarcinoma cells.

Murine hepatocarcinoma cell line Hepa1-6 was purchased from the Cell Bank of the Type Culture Collection of the Chinese Academy of Sciences (Shanghai, China) and was grown in DMEM with 10% FBS and 1% penicillin/streptomycin, and maintained at 37°C in a humidified incubator with a 5% CO2 atmosphere. Exponentially growing Hepa1-6 cells were seeded into desired plates and allowed to attach for 24 h before treatment. Cells were treated with various doses of curcumin and resveratrol dissolved in DMSO. The identical volume of DMSO was used as a control.

The effects of curcumin and resveratrol on cell proliferation were detected by MTT assay. Briefly, Hepa1-6 cells were seeded into 96-well plates (3.5×103 cells/well) and allowed to attach for 24 h before treatment. The cells were exposed to various doses of curcumin and/or resveratrol for 48 h, and cell viability was evaluated every 24 h by MTT assay according to the manufacturer’s instructions. The cell survival rate was calculated as follows: Cell survival rate (%) = experimental OD value/control OD value × 100.

Morphological changes characteristic of apoptosis were detected by Hoechst 33258 staining. Briefly, 6×104 Hepa1-6 cells were seeded into 6-well plates and incubated for 24 h. Hepa1-6 cells were treated with curcumin and/or resveratrol for 48 h, and stained with Hoechst 33258 for 5 min at room temperature. The cells were observed and photographed using an inverted fluorescence microscope (AFM010-2, Nikon, Japan).

Hepa1-6 cells were treated as indicated, collected, and stained with Annexin V-FITC and PI as recommended by the manufacturer. Apoptotic cells were detected by flow cytometry, and the extent of apoptosis was calculated with FlowJo software (version 7.6.1).

Intracellular ROS production was detected by DCFH-DA staining. DCFH-DA is cleaved intracellularly by non-specific esterases to form DCFH, which is further oxidized by ROS to form the fluorescent compound DCF (22). Briefly, Hepa1-6 cells (1×105) were placed in 60-mm culture dishes. On the second day, cells were exposed to the indicated concentrations of agents for a 48 h treatment, and stained with DCFH-DA (10 μM) at 37°C for 20 min. The stained cells were collected and added to black 96-well plates at a density of 2×105 cells/well. The presence of DCF fluorescence was quantified with a fluorescence microplate reader (Thermo Scientific Varioskan Flash; Thermo Fischer Scientific, Waltham, MA, USA) at wavelengths of 488 nm for excitation and 525 nm for emission. For ROS inhibition, cells were pretreated with NAC (2.5 mmol/l for 2 h), followed by curcumin and/or resveratrol treatment.

After treatment with curcumin and/or resveratrol, caspase-3, -8 and -9 activities were measured by the cleavage of the specific chromogenic substrate according to the manufacturer’s instructions. For inhibiton of caspase activity, Hepa1-6 cells were pretreated with Z-VAD-FMK (50 μmol/l for 2 h) and further treated with curcumin and/or resveratrol.

Data are expressed as the means ± standard deviation of at least two independent experiments, each conducted in triplicate. Statistical significances between the control and drug treatment were determined by one-way ANOVA. A value of P<0.05 was considered to indicate a statistically significant result.

Effects of curcumin and resveratrol on Hepa1-6 cell proliferation

Synergistic antiproliferative effect of curcumin and resveratrol on Hepa1-6 cells

Combination of curcumin and resveratrol induces apoptosis in Hepa1-6 cells

Combination of curcumin and resveratrol activates caspases in Hepa1-6 cells

Role of ROS in curcumin and resveratrol-induced apoptosis

In Chinese herbalism, every herb has its own characteristics, and TCM physicians believe that illness can be effectively treated by combining herbs based on their various features. Combinations of multiple herbs guided by the theories of TCM, called Chinese herbal formula, are the major methods for the application of Chinese herbs. Due to the lack of appropriate ancient Chinese herbal formulas for cancer, most TCM physicians combine multiple herbs for a formula or prescription based on the illness and body condition of patients, TCM principles, progress in pharmacological research and personal experience. However, the combination of different anticancer herbs may elicit additive, synergisic or antagonistic effects (33). Thus, there is a great need to explore the combination effects of anticancer herbs, and establish effective herbal formulas for various situations in cancer treatment (33,34).

Apoptosis, first proposed by Kerr et al in 1972, is a normal physiological process that maintains cell homeostasis (36). Apoptosis plays a key role in the pathogenesis of diseases, such as degenerative diseases and cancer (37). Apoptosis has been recognized as a major anticancer therapeutic response (37,38). Manipulation of apoptosis has become one of the popular strategies of cancer treatment. For example, doxorubicin and cisplatin induce apoptosis in HepG2 hepatoma cells via different signaling pathways (39,40). Our data demonstrated that the combination of curcumin and resveratrol induced apoptotic cell death as indicated by nuclear morphological alterations and positive Annexin/PI staining. This suggests a similar mechanism as other anticancer therapy. Therefore, induction of apoptosis is an important mechanism in the elicited anticancer effects of the combination treatment of curcumin and resveratrol.

The death receptor pathway and mitochondrial pathway are the primary apoptotic pathways (37,38). Caspase-8 is the initiator in the death receptor pathway, activated by conformational change. It is reported that curcumin induces apoptosis via activation of the Fas/caspase-8 pathway (41). Caspase-9, an important initial factor in mitochondrial pathways, could be activated by the complex consisting of cytochrome c, pro-caspase-9 and apoptotic protease activating factor-1 (Apaf-1). Resveratrol markedly promotes caspase-9 activation, which is associated with provoking the release of CytC (42). Once activated, the two pathways converge to a common execution phase and stimulation of caspase-3 activation (43). In the present study, the activities of caspase-8, -9 and -3 were dramatically enhanced by the combination treatment of curcumin and resveratrol. In addition, the apoptosis of Hepa1-6 cells induced by the combination treatment of curcumin and resveratrol was completely abrogated by the pan caspase inhibitor, Z-VAD-FMK. These results suggest that both extrinsic and intrinsic apoptotic signaling pathways are involved in the apoptosis induced by the combination treatment of curcumin and resveratrol.

XIAP and survivin proteins are members of the inhibitors of the apoptotic protein (IAP) family. Both inhibit caspase activation to protect cells from apoptosis. XIAP can inhibit caspase-3 by a linker region between the first two BIR domains, and suppress caspase-9 via its third BIR domains to protect cells from apoptosis (48). It has been reported that the activity of caspase-9 was significantly elevated in lung cancer A549 cells transfected with siRNA against survivin (49). Our data showed that the combination of curcumin and resveratrol downregulated the expression of XIAP and survivin, suggested that the downregulation of XIAP and survivin may contribute to the anticancer effects induced by the combination treatment of curcumin and resveratrol.

In conclusion, our results demonstrated that combination treatment of curcumin and resveratrol elicits a synergistic anticancer effect in hepatocarcinoma cells via extrinsic and intrinsic apoptosis, and is associated with ROS generation and downregulation of XIAP and survivin. The present study suggests that a combination of curcumin and resveratrol is a promising novel anticancer treatment strategy for liver cancer. The present study also provides new insights into the effective mechanism of paired-herbs in Traditional Chinese Medicine.

This study was supported, in part, by the National Natural Science Foundation of China (81273726), the Program of the Science and Technology Commission of Shanghai Municipality (11495801300), the Three-Year Action Program of Shanghai Municipality for Traditional Chinese Medicine (ZYSNXD-CC-ZDYJ017), the Long-Yi Scholars and the Research Team Program from the State Clinical Research Center of TCM in Longhua Hospital (LYTD-04), the Xing-Lin Scholars Program and the Key Discipline of the State Administration of Traditional Chinese Medicine (Traditional Chinese Medicine in Oncology, LHZLK-1107), and the Shanghai Shen Kang Platform Grant (SHDC12007206). We also thank the Shanghai Key Laboratory of Tissue Engineering for the technical assistance. 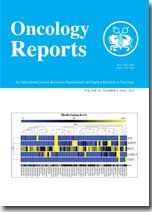