Brain glioma is the most common malignant intracranial tumor and has become the focus of research on diseases of the central nervous system due to its high incidence and poor prognosis. As a small‑molecule inhibitor of X-linked inhibitor of apoptosis protein (XIAP), embelin has the ability to specifically inhibit XIAP to control and regulate the apoptosis of various types of tumor cells. However, to date, the mechanism of action for this effect is not well understood. The aim of this study was to investigate the role that the mitochondrial pathway plays in embelin-induced brain glioma cell apoptosis and the effect of embelin on the cell cycle. Brain glioma cells were treated with different doses of embelin. The MTT method was used to determine cell proliferation, and flow cytometry was used to determine apoptosis, as well as changes in the cell cycle and cell mitochondrial membrane potential. Western blot analysis was performed to determine the expression levels of apoptosis‑associated proteins, Bcl-2, Bcl-xL, Bax and Bak as well as cytochrome c. We found that embelin induced a time‑ and dose‑dependent apoptosis of brain glioma cells, and that it could arrest the cell cycle in the G0/G1 phase. Embelin also caused changes in brain glioma cell mitochondrial membrane potential. Additionally, embelin regulated the shifting of Bax and Bcl-2 to promote the mitochondrial release of cytochrome c, thus activating the caspase proteins to cause apoptosis. Thus, embelin induces apoptosis in brain glioma cells which is closely associated with the mitochondrial pathway.

Brain glioma is a tumor originating from neuroepithelial tissue and is the most common malignant intracranial tumor accounting for 70% of human primary malignant brain tumors (1,2). Brain glioma has become the focus of research on diseases of the central nervous system due to its high incidence and poor treatment outcome (3,4). At present, brain glioma is mainly treated with surgery, radiotherapy and chemotherapy, but the curative effect and prognosis are far from optimistic particularly for tumors of higher pathological grade. The treatment results of such diseases have not improved significantly in recent years. The median survival time of patients with brain glioma is approximately one year (5,6). Thus, it has become an urgent research aim to identify the mechanisms promoting brain glioma apoptosis and to search for therapeutic targets with breakthrough effects.

X-linked inhibitor of apoptosis protein (XIAP) is the main member of the inhibitor of apoptosis proteins (IAPs) that regulate apoptosis via various processes (7,8). Previous studies have demonstrated antitumor effects achieved via the inhibition of XIAP expression. As a specific inhibitor of XIAP, embelin inhibits the action of XIAP inside cells through binding with the Smac binding site in the BIR3 domain in the XIAP protein molecule (9–11). Previous studies have demonstrated that embelin exhibits antitumor effects, and embelin at therapeutic dose can restrain the growth of various types of tumor cells including prostate cancer, pancreatic cancer, breast cancer and colon cancer (12–15). According to another report, apoptosis of brain glioma cells is closely related to the mitochondrial pathway (16–18). The inter-shifting of Bcl-2 and Bax proteins releases cytochrome c and activates the caspase family to finally induce apoptosis (19,20).

Despite the above advances, most of the detailed mechanisms of embelin against brain glioma still remain unknown. The purpose of this study was to investigate the impacts of embelin in vitro on the apoptosis of brain glioma cells and the cell cycle and to explore the relevant signaling pathway, so as to provide effective targets and approaches for the clinical therapy of brain glioma.

The cells were cultured in a 96-well culture plate at a density of 1×105 cells/ml. Different doses of embelin (Sigma, St. Louis, MO, USA) were administered and all the cells were cultured in a 5% CO2 incubator for a further 24, 48 and 72 h. Twenty micrograms of MTT (5 mg/ml) was added to each well followed by incubation in a CO2 incubator for 4 h before the culture solution was disposed of, and 200 μl of DMSO was added to each well at room temperature for oscillation for 15 min. A microplate reader was used for analysis.

Trypsin was digested to collect the cells of all the experimental groups and the cell density was adjusted to 1×106 cells/ml. Five microliters of Annexin V-FITC and 5 ml of propidium iodide (PI) were added to the cell culture followed by a 20-min incubation at 4°C prior to flow cytometric analysis.

The cells of all the experimental groups were collected using the trypsin method. Consequently, the cells were fixed at 4°C with 75% cold ethanol overnight; ethanol was disposed and the cells were washed with phosphate-buffered saline (PBS). The cell density was adjusted to 1×106 cells/ml. Addition of 500 ml of DNA stain to the cells at room temperature, in a dark for 20 min, was carried out before analysis with flow cyto-metry.

A Perkin-Elmer LS-50B fluorospectrophotometer was used to measure the alterations in fluorescence intensity when the excitation wavelength was 380 nm and emission wavelength was 460 nm. Previously described methods were used (19).

In order to investigate the effects of embelin on brain glioma cell growth, U87 cells were cultured with different concentrations of embelin (0, 10, 50, 100 and 150 μg/ml) for 24, 48 and 72 h prior to determination of the cell proliferation rate using the MTT method. We found that the optical density values of the cells decreased gradually when increasing concentrations of embelin were used; this decrease was most significant when 100 μg/ml of embelin were used (Fig. 1). Thus, embelin had an inhibition effect on the growth of brain glioma U87 cells.

Brain glioma U87 cells were treated with different doses of embelin followed by measurement of the alterations in caspase protein activity. We found that the activity of caspases-3, −8 and −9 increased significantly with increasing doses of embelin. The most significant increase in caspase-3, −8 and −9 activity was observed when 100 μg/ml of embelin was used (Fig. 3). These results indicate that embelin induces the activation of caspase proteins in brain glioma cells leading to caspase-dependent apoptosis.

To further investigate the signaling pathway of embelin-induced brain glioma cell apoptosis, JC-1 staining and flow cytometry were used to assess the changes in the mitochondrial membrane potential. Moreover, western blot analysis was used to analyze the changes in the expression levels of relevant proteins such as Bax, Bcl-2, Bcl-xL, Bak and cytochrome c. We found that the therapeutic dose of embelin resulted in a decrease in the mitochondrial membrane potential (Fig. 4A). We also found that embelin downregulated the expression levels of Bcl-2 and Bcl-xL in a dose-dependent manner, while the expression levels of Bax and Bak proteins were increased (Fig. 4B-E). These results indicate that embelin changes the mitochondrial membrane potential to induce an increase in Bax and Bcl-2 expression as well as the release of cytochrome c into the cytoplasm, resulting in brain glioma cell apoptosis.

In order to investigate the effect of embelin on brain glioma cell cycle, flow cytometry was used for cell cycle analysis. The results showed that 48 h following treatment of U87 cells with different doses of embelin, the number of U87 cells in the G0/G1 phase was significantly increased (Fig. 5). We also found that there was a significant decrease in the expression levels of proteins such as CDK4, CDK6 and cyclin D1 that are known to control the cell cycle (Fig. 6). Thus, embelin treatment results in an increased number of brain glioma cells in the G0/G1 phase, leading to inhibiton of brain glioma cell proliferation.

The occurrence of ubiquitous apoptosis has been widely recognized, and apoptosis has been shown to play an important role in the genesis and progression of tumors (22,23). Previous studies have demonstrated that most of the available antitumor drugs inhibit tumor growth through the induction of tumor cell apoptosis. Therefore, the intervention of apoptosis to treat tumors has become a novel target of research in terms of antitumor drugs and a new direction for the development for current tumor pharmacology.

In conclusion, the present study revealed that embelin induced brain glioma apoptosis via regulation of the Bcl-2/Bax family to act on the mitochondria pathway. As a new intervention factor, embelin is an excellent prospect for use in the clinical therapy of brain glioma. 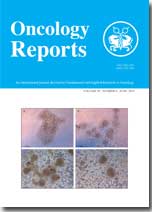