Apoptosis repressor with caspase recruitment domain (ARC), an inhibitor of apoptosis, is primarily expressed in terminally differentiated tissues. Recent studies have revealed that ARC is highly expressed in a variety of human cancer cell lines and epithelial-derived cancers, which suggests that ARC plays an important role in the process of carcinogenesis. However, whether ARC is involved in the development of nasopharyngeal carcinoma (NPC) and the various roles it plays in NPC remain unclear. In the present study, we examined the expression of ARC in NPC cell lines and NPC tissues and the relationship between its subcellular expression and clinicopathological grade; moreover, we explored the effect of this protein on radiation resistance and chemoresistance in NPC cells. We found that cytoplasmic ARC was expressed at high levels in NPC tissues, at moderate levels in severe atypical hyperplasia and at low levels in benign nasopharyngeal tissues. High expression of cytoplasmic and nuclear ARC was correlated with advanced local invasion. However, only a small amount of nuclear ARC was expressed in NPC in contrast to cytoplasmic ARC. We also found that attenuation of ARC expression by miRNA resulted in decreased X-radiation and cisplatin resistance in NPC CNE-2 cells. In contrast, overexpression of ARC resulted in increased X-radiation and cisplatin resistance in NPC 6-10B cells. Furthermore, we demonstrated that ARC appears to be critical for blocking the activation of casapse-8 and casapse-2 in NPC cells subjected to X-radiation or cisplatin. These results suggest that high expression of ARC plays an important role in the pathogenesis of NPC and leads to X-radiation and cisplatin resistance in NPC.

Apoptosis is a form of procedural cell death. It plays a role in tissue growth and dynamic equilibrium, as well as in numerous diseases, including cancer, autoimmune diseases, viral infections and degenerative diseases (1,2). Apoptosis is mediated by two integrated pathways, the extrinsic and intrinsic apoptotic pathways. In the extrinsic pathway, the combination of ligands and cell surface death receptors stimulates formation of the death-inducing signaling complex (DISC), which further activates upstream caspase-8. Activated caspase-8 stimulates downstream caspase molecules, inducing hydrolysis of a large number of cellular proteins and eventually leads to cell death. In the intrinsic pathway, a stimulus signal is delivered to the mitochondria and endoplasmic reticulum (ER) through the interaction of BH3-only and Bcl-2 family proteins, which in turn triggers the release of apoptogen cytochrome c from mitochondria to the cytoplasm. The cytochrome c in the cytoplasm interplays with apoptosis-related factor 1 (Apaf-1) in the presence of dATP and stimulates formation of apoptosomes and activation of upstream caspase-9, which subsequently activates downstream caspases, finally inducing apoptosis. Therefore, the activation of the apoptotic pathway eventually leads to mitochondrial dysfunction, caspase activation and cell death.

Although these pathways are mediated by death signal stimulation and activation of various pro-apoptotic factors, each stage of the apoptotic pathway is regulated at additional levels by endogenous proteins that play a role in reverse adjustment. These proteins include FLIP, which opposes the extrinsic pathway; Bcl-2 and Bcl-xL, which block the release of apoptogens from the mitochondria; and IAPs, which inhibit the activation of downstream caspases.

ARC (apoptosis repressor with caspase recruitment domain) is an apoptotic inhibitor with a caspase enrichment of functional domains. It is an endogenous CARD containing protein that inhibits apoptosis by selectively binding to and inhibiting caspase-8 and caspase-2, but not caspase-1, caspase-9 and caspase-3 (3,4). It can also directly combine with FADD and Fas, and block the interaction of Fas and FADD, thereby inhibiting the assembly of DISC (4). In addition, interactions between ARC and pro-apoptotic factor Bax preclude activation of Bax and its translocation to the mitochondria (5). In addition, the proline-glutamic acid-riched region of ARC can be directly bound to the tetramerization domain of p53, thereby blocking p53 tetramerization and suppressing p53 transfer from the cytoplasm to the nucleus (6). Actually, ARC can inhibit apoptosis induced by death receptors, hypoxia, oxidative stress, serum deprivation and ischemia-reperfusion (3,4,7–9).

As inhibition of apoptosis has been implicated in carcinogenesis, ARC potently inhibits a wide array of death signals, which suggests that it may play a functionally important role in the process of carcinogenesis. It remains unknown whether ARC plays a role in the development of nasopharyngeal carcinoma (NPC). In the present study, we assessed the abundance of ARC in NPC cell lines and NPC tissues and the relationship between its expression and clinicopathological tumor grade. Moreover, we sought to assess the effects of ARC expression, through downregulation and overexpression of ARC, on the response of NPC cell lines with diverse intrinsic radiation- and chemo-sensitivities and different levels of ARC expression.

Human NPC cell lines CNE-1, CNE-2, 5–8F, 6–10B and HNE-2 have been previously described (10,11). Formalin-fixed, paraffin-embedded tissues and clinicopathological parameters were obtained from 82 patients with a pathological diagnosis of poorly differentiated squamous cell carcinoma, from 14 patients with severe atypical hyperplasia and from 20 patients with benign nasopharyngeal diseases at the Department of Otolaryngology and Pathology of the Xiangya Hospital. The present study was approved by the Ethics Committee of the Xiangya School of Medicine, Central South University, China.

NPC cells were cultured in RMPI-1640 medium (Gibco, Grand Island, NY, USA) supplemented with 10% fetal bovine serum (FBS; Gibco) at 37°C in an incubator with a humidified atmosphere with 5% CO2 in air.

Cell viability was detected using 2-(2-methoxy-4-nitrophenyl)-3-(4-nitrophenyl)-5-(2,4-disulfo phenyl)-2H-tetrazolium, monosodium salt (CCK-8 Kit; Beyotime). CCK-8 solution (10 μl) was added to each well of 96-well plates with the same amount of culture fluid and drugs. CCK-8 solution without cell as well as blank plus. Optical densities were determined on a microtiter plate reader at 450 nm.

All statistical analyses were carried out using SPSS for Windows version 17.0 (SPSS). Log-rank test and one-way analysis of variance (ANOVA) were used to analyze the significance of differences. All cell culture experiments were performed in triplicate. P<0.05 was considered to indicate a statistically significant result.

Since ARC plays an important role in apoptosis escape and the development of cancers, we hypothesized that ARC is induced in NPC cell lines. To test this hypothesis, we assessed the abundance of ARC in 5 cell lines using western blotting (Fig. 1A). ARC was detectable in most cell lines but present to a variable extent. Quantitative analysis revealed that levels were highest in CNE-2 and lowest in 6–10B cells (Fig. 1B). ARC was also present in the other NPC cell lines including CNE-1, 5–8F and HNE-2.

b Mann-Whitney U test.

Overexpression of ARC increases the resistance to X-radiation

Since ARC is known to inhibit apoptosis through extrinsic and intrinsic apoptotic pathways and presents at high levels in most NPC tissues, we hypothesized that this protein may contribute to radiation-resistance in NPC. To confirm this hypothesis, ARC-overexpressing 6–10B cells, ARC-silenced CNE-2 cells and their respective control cells (Fig. 2A) were exposed individually to X-ray radiation (2–10 Gy). Cell viability was then examined after 96 h. We found that cell viability in the ARC-overexpressing 6–10B cells was significantly increased at each indicated dose compared with the control cells (P<0.001; Fig. 2B). The ARC-transfected 6–10B cells were less sensitive to radiation than the control cells. Furthermore, the ARC-silenced CNE-2 cells exhibited decreased cell viability and increased sensitivity to radiation when compared to the control cells (P<0.001; Fig. 2C).

Overexpression of ARC increases the resistance to cisplatin

We also investigated the effect of ARC on cisplatin-induced cell apoptosis. Cells were exposed to cisplatin (IC30) for 48 h and the proportion of apoptotic cells was assessed using the Annexin V-FITC apoptosis detection kit. Compared to the control cells, overexpression of ARC in 6–10B cells resulted in a lower proportion of apoptotic cells. The percentage of apoptotic cells in the ARC-overexpressing 6–10B cells was significantly decreased when compared to the controls (24.8±2.8 vs. 35.1±2.6%, P<0.001). Consistent with the reduced viability, knockdown of ARC promoted cell apoptotic activity. The prercentage apoptotic cells after repression of ARC was increased compared to that observed in the cells without silencing of ARC (56.8±4.4 vs. 33.0±3.7%, P<0.001) (Fig. 3C). These results indicate that ARC protects cells from cisplatin-induced apoptosis.

ARC is primarily expressed in terminally differentiated cells, such as heart, skeletal muscle and nerve cells (4,12). Recent research suggests that ARC is highly expressed in a variety of non-terminally differentiated tissues and in human cancer cell lines, including those derived from breast, lung, pancreas, colon, cervix, prostate, kidney and lymph (13). Expression of ARC in primary epithelial-derived breast cancer and colon cancer was also higher than that in the respective benign epithelial tissues (14,15), but the applicability of this finding to NPC remains unknown.

The present study assessed the expression of ARC in NPC cell lines and NPC tissues. Western blot analysis results demonstrated that ARC was present to a variable extent in several NPC cell lines. ARC level was high in CNE-2, HNE-2 and CNE-1 cells; in contrast, its level was low in 5–8F and 6–10B cells. Because of the inherent limitations of cell lines, we assessed ARC levels in primary NPC, severe atypical hyperplasia and benign nasopharyngeal tissues by immunohistochemistry. We found that the amount of cytoplasmic ARC was increased in NPC and severe atypical hyperplasia but not in benign nasopharyngeal tissues. Moreover, cytoplasmic and nuclear ARC was increased in T3–4 stage NPC, which indicates that high expression of ARC provides a direct correlation with advanced local invasion. In addition, we found that only a small amount of nuclear ARC was expressed in NPC and severe atypical hyperplasia tissues in contrast to cytoplasmic ARC, which is similar to expression in human breast cancer (14). These results demonstrate that ARC may serve as a novel marker of NPC and suggest that it may be important in the pathogenesis of NPC.

Carcinogenesis often involves defects in apoptosis that is mediated by an increase in apoptotic inhibitors. It was previously found that multiform endogenous apoptosis inhibitors are significantly present at high levels in numerous types of cancers. For example, survivin, cIAP2 and XIAP which belong to the IAP family, were significantly more highly expressed in colon cancer, prostate cancer and leukemia, and high expression of these molecules indicated a poor prognosis (16–18). Similarly, Bcl-2 and Bcl-xl were highly expressed in leukemia, breast, colon, esophageal, pancreatic and uterine cancer (19–24). Thus, the abnormal expression of ARC may provide NPC cells with a survival mechanism that normally serves to protect cancer cell populations.

Radiation therapy has been thought to induce cell death mainly by apoptosis (25,26). Similarly, cisplatin exerts its cytotoxic effect by inducing DNA damage and activating apoptosis (27). ARC, as an apoptosis inhibitor through mediating both the extrinsic and intrinsic pathways, is likely to suppress radiation- and cisplatin-induced cell apoptosis. ARC was found to protect against doxorubicin and γ-radiation in breast cancer cells, and inhibition of ARC promoted apoptosis and sensitized cytosine arabinoside-induced cell death in OCI-AML3 cells (14,28).

Caspase-8 and caspase-2 are initiator caspases that are activated following various forms of genotoxic stress, including that induced by radiation and cisplatin (29–32). Caspase-8 plays an important role in transducing the apoptosis signal to downstream death effectors, including CD95, TRAIL-DR4 or TRAIL-DR5, which results in formation of the DISC (33). Caspase-2 possesses a caspase recruitment domain (CARD) that enables it to interact with other CARD carrying proteins such as TRAF-2 and PIDD (p53 induced protein with a death domain), which eventually leads to activation of Bid and mitochondrial injury (34,35). ARC can interact with caspase-2 and caspase-8 and inhibit their activation to protect against cell death.

In summary, the present study demonstrated that ARC is expressed at high levels in NPC cell lines. Moreover, abundant ARC was present in most NPC and severe atypical hyperplasia tissues, but not in benign nasopharyngeal tissues. Furthermore, we demonstrated the function of ARC in exerting X-radiation resistance and cisplatin resistance by inhibiting apoptosis through blocking the activation of caspase-2 and caspase-8.

The present study was supported by the Natural Science Foundation of China (30672296). 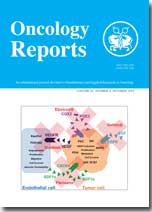