NAD(P)H:quinone oxidoreductase-1 (NQO1) is commonly elevated in various types of human cancers, including pancreatic, breast and thyroid cancer, as well as others. However, little is known concerning the status of NQO1 in small cell lung cancer (SCLC). To investigate the clinicopathological significance of NQO1 expression and evaluate its role as a potential prognostic marker in SCLC, protein and mRNA expression levels of NQO1 were determined in four fresh tissue samples of SCLC and paired adjacent non-cancerous tissues using western blotting and real-time qRT-PCR, respectively, and 115 cases of SCLC with strict follow-up were selected for immunohistochemical (IHC) staining of NQO1 protein. The correlation between NQO1 expression and the clinicopathological features of SCLC was evaluated using the Chi-square (χ2) and Fisher's exact tests, survival rates were calculated using the Kaplan-Meier method, and univariate and multivariate analyses were performed using the Cox proportional hazards regression model. In regards to the results, levels of NQO1 protein and mRNA were significantly elevated in the four fresh tissue samples of SCLC compared with levels in the paired adjacent non-cancerous tissues, respectively. IHC analysis showed that the rate of strong positive NQO1 protein expression was significantly higher (48.70%) in SCLC when compared with the rate in either adjacent non-cancerous or normal lung tissues (both P<0.001). The rate of strong positive NQO1 protein expression was correlated with large tumor size (P=0.019), late pathologic stage (P=0.001) and the presence of lymph node metastasis (P=0.001). Moreover, high‑level expression of NQO1 protein was significantly correlated with lower disease-free survival (P=0.001) and 5-year survival rates (P<0.001) in SCLC patients, particularly early‑stage patients (P=0.045 and P=0.033, respectively). Further Cox analysis revealed that NQO1 expression emerged as a significantly independent hazard factor for the 5-year survival rate of patients with SCLC (P=0.042). In conclusion, NQO1 plays an important role in the progression of SCLC, and it may potentially be used as a biomarker and therapeutic target of SCLC.

Small cell lung cancer (SCLC), which represents 12.95% of all lung cancer diagnoses and continues to be a major clinical issue worldwide (1), is an aggressive neuroendocrine subtype of lung cancer for which there is no effective treatment (2). Patients with limited disease have a median survival time of 16–24 months when treated with chemotherapy and concurrent thoracic radiation (3). The mechanism of carcinogenesis, similar to other cancers, is still not fully understood. Therefore, there is an urgent need for a better understanding of SCLC pathogenesis that may lead to more effective treatment strategies.

NAD(P)H:quinone oxidoreductase-1 (NQO1), which was discovered by Professor Ernster in 1958 (4) and originally called DT-diaphorase (5), is located on chromosome 16q22 (6). Several functions of NQO1 have been proposed, including xenobiotic detoxification, superoxide scavenging, maintenance of endogenous antioxidants, modulation of p53 and proteasomal degradation (7). It is conceivable that NQO1 functions primarily to protect normal cells from oxidant stress and electrophilic attack. These functions have also led to the suggestion that NQO1 plays an important role in cancer chemoprevention. On the other hand, NQO1 is expressed at high levels in most human solid tumors including those of the colon, breast, pancreas, ovaries and thyroid (8–10), and has also been detected following the induction of cell cycle progression and proliferation of melanoma cells (11). However, to date, the expression status of NQO1 in SCLC and its relationship with clinicopathological features/prognosis is unknown.

The critical role of NQO1 in numerous cancers compelled us to study the function of NQO1 in SCLC. Therefore, we performed western blotting, real-time RT-PCR (qRT-PCR) and immunohistochemical (IHC) staining of NQO1 in SCLC and normal lung tissues and found that NQO1 may be an independent prognostic biomarker for SCLC.

The present study complied with the Helsinki Declaration and was approved by the Human Ethics and Research Ethics Committees of Yanbian University Medical College in China. Through surgery consent form, patients were informed that the resected specimens would be stored by the hospital and would potentially be used for scientific research, and that their privacy would be maintained. Follow-up survival data were collected retrospectively through analysis of medical records.

Fresh samples from four cases of SCLC were paired with adjacent non-cancerous tissues, and 115 cases of routinely processed and paraffin-embedded SCLC specimens with strict follow-up for survival status were selected randomly from patients who underwent surgery between 2003 and 2011 at Jilin University Hospital and the Tumor Tissue Bank of Yanbian University Medical College. The pathological parameters, including age, gender, smoking status, tumor size, location subtype, clinical stage, lymph node metastasis, neuron-specific enolase (NSE) level, disease-free and 5-year survival data, were carefully reviewed for all the above cases. The patient ages ranged from 26–76 years with a mean age of 49.6 years. The male to female ratio was 69:46. Tumors were staged according to the 7th edition of the American Joint Committee on Cancer. Of the 115 SCLCs, 70 were early-stage (I–II), and 45 cases were late-stage (III). Forty-four cases were localized in the central bronchus, and 71 cases in the peripheral bronchus. There were no patients with distant metastasis prior to surgery. By March 2013, 99 patients had died while 16 patients remained alive. The median survival time was 27.2 months.

IHC analysis was performed using the Dako LSAB kit (Dako A/S, Glostrup, Denmark). Briefly, to eliminate endogenous peroxidase activity, 4-μm tissue sections were deparaffinized, rehydrated and incubated with 3% H2O2 in methanol for 15 min at RT. Antigen retrieval was performed at 95°C for 20 min by placing the slides in 0.01 M sodium citrate buffer (pH 6.0). The slides were then incubated with the NQO1 antibody (1:500; Santa Cruz) at 4°C overnight. After incubation with the biotinylated secondary antibody at RT for 30 min, the slides were incubated with streptavidin-peroxidase complex at RT for 30 min. Immunostaining was developed using 3,3′-diaminobenzidine, and Mayer’s hematoxylin was used for counterstaining (14). We used mouse IgG as an isotope controls. In addition, positive tissue sections were processed while omitting the primary antibody (mouse anti-NQO1) as negative controls.

Statistical analyses were performed using SPSS 17.0. Correlation between NQO1 expression and clinicopathological characteristics was evaluated using the χ2 and Fisher’s exact tests. Disease-free and 5-year survival rates after tumor removal were calculated by the Kaplan-Meier method, and difference in survival curves was analyzed by the log-rank test. Multivariate analysis was performed using the Cox proportional hazards regression model on all significant characteristics determined using univariate analysis. A P-value of <0.05 was considered to indicate a statistically significant result.

a P<0.01 compared with either adjacent non-tumor or normal lung tissues.

Correlation between NQO1 expression and clinicopathological features of SCLC

Correlation between NQO1 expression and clinicopathological features of the SCLC cases.

Univariate and multivariate analysis of clinicopathological factors for the 5-year survival rate of 115 patients with SCLC.

NQO1 is a mainly cytosolic enzyme that uses NADH or NADPH as substrates to catalyze the two-electron reduction of quinines to their hydroquinone forms (15), thus bypassing the toxic semiquinone intermediates, and these resultant hydroquinones are thus ready for further conjugation and excretion (16). In addition, the enzyme is present as a ubiquitous flavoprotein that is widely expressed in body tissues (17) and localized primarily in the cytosol, although it has been detected in the nucleus at lower levels (18). NQO1 is induced along with a battery of defense genes that provide protection against different stresses as well as carcinogen-induced organ tumorigenesis.

The activity of the NQO1 enzyme can be influenced by a major polymorphism involving a single C to T substitution at nucleotide 609 in exon 6 of the NQO1 gene that causes a Pro187Ser amino acid change in the protein (19). Some studies have shown that the polymorphism in the NQO1 gene affects the translation of the NQO1 protein. The NQO1 C609T polymorphism has been associated with an increased risk of various cancers such as renal (20), lung (21), esophageal (22), colorectal (23), and head and neck cancer (24). Therefore, since there is an increased incidence of disease and xenobiotic-induced toxicity in individuals carrying a polymorphism in NQO1, it has been suggested that it plays a role in chemo-protection.

Recently, however, it was reported that NQO1 protein and mRNA were abnormally elevated in many solid tumors. Mikami et al (25) demonstrated a close correlation between protein expression and enzyme activity of NQO1 in colon cell lines and in colorectal tumor samples, and tumors with nodal metastases showed significantly higher NQO1 levels than did tumors without metastasis, raising the possibility that NQO1 expression is related to tumorigenesis and malignant progression of colorectal tumors.

Awadallah et al (10) and Lyn-Cook et al (8) reported that NQO1 is upregulated in pancreatic ductal adenocarcinoma (PDAC), and that combining NQO1 expression with cellular morphology assessment minimized the risk of a false-positive diagnosis. A study by Fagerholm et al (26) in breast cancer patients showed that NQO1 may predict the outcome of patients with overabundant expression of the Fanconi anemia group D2 (FANCD2) protein through its potential modification of prognostic DNA repair markers. A study by Li et al (27) highlighted that NQO1 was not only a ‘biomarker’, but also an exploitable and tumor-selective target for PDAC. However, little is known concerning the status of NQO1 in SCLC.

In the present study, qRT-PCR and western blotting data demonstrated that the levels of NQO1 mRNA and protein were significantly higher in SCLC samples compared with adjacent non-tumor tissues. Furthermore, we performed IHC staining and analysis of 115 cases of SCLC, and found that a strongly positive rate of NQO1 protein expression was significantly higher than that observed in either adjacent non-tumor or normal lung tissues, indicating that NQO1 plays a potentially important role in the progression of SCLC. Meanwhile, we analyzed the correlation between NQO1 expression and clinicopathological features of SCLC and found that NQO1 expression was significantly correlated with large tumor size, late pathologic stage and lymph node metastasis (P<0.05), but not with age, gender, smoking status, location subtype or NSE level (P>0.05).

Collectively, the present study implicates NQO1 as a putative new attractive biomarker for prognostic evaluation and as a potential molecular target in patients with SCLC. Additionally, Vasiliou et al (28) indicated that NQO1 was shown to be upregulated as part of the oxidative stress response and inexplicably overexpressed in particular types of tumors, whose function has not yet been elucidated. Garate et al (11) attempted to determine the expression and basic function of NQO1 in melanoma cell proliferation, and found that NQO1 significantly induced cell cycle progression by upregulating the expression of cyclin A2, B1 and D1, leading to the proliferation of melanoma cells in vitro. In spite of this, the molecular mechanism of NQO1 affecting tumor progression is still not clearly understood. NQO1 may constitute an undiscovered signaling molecule in cancer cells, and further studies are warranted to explore this possibility.

This study was supported by grants from the National Natural Science Funds of China (61371067), and the International Cooperative Project from the Jilin Provincial Science and Technology Department in China (20140414050GH). 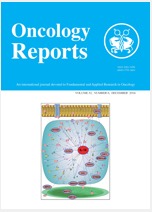