Niclosamide, used as an antihelminthic, has demonstrated some properties of anticancer effects. However, its role in osteosarcoma remains to be determined. The aim of this study was to determine the effect of niclosamide on human osteosarcoma cell lines. The human MG-63 and U2OS osteosarcoma cell lines were treated with different concentrations of niclosamide. The cell inhibitory rate was calculated by CCK-8 assay. Cell cycle was detected by flow cytometry. Cell apoptosis was determined by Hoechst 33324 staining, flow cytometry and fluorescence microscope, respectively. The expression of bcl-2, bax and pro-caspase-3 were measured by western blotting. Niclosamide exerted an inhibitory effect on the two cell lines in a time- and dose-dependent manner. Niclosamide was found to induce the arrest of S and G2/M phase in U2OS cells and G2/M in MG-63 cells. Moreover, niclosamide induced apoptosis in MG-63 and U2OS cells. The bax/bcl-2 ratio increased while the expression of pro‑caspase-3 decreased significantly in the two cell lines. The results indicated that niclosamide inhibits proliferation, and induces apoptosis and cell cycle arrest in human osteosarcoma cell lines.

Osteosarcoma is the most frequent primary malignant bone tumor in young adolescents and children (1). Currently, patients with osteosarcoma are evaluated and treated using multidisciplinary treatments including surgical resection of the lesions, radiotherapy, adjuvant chemotherapy and neoadjuvant chemotherapy (1). Combination of a variety of chemotherapeutic drugs is usually recommended during the process of chemotherapy. However, traditional chemotherapeutic drugs result in greater renal, cardiac and auditory dysfunction toxicity, and 30–40% of patients with osteosarcoma still have a poor response (2). Therefore, drug development is important for the treatment of osteosarcoma.

Niclosamide, a type of salicylamide derivative, is an anti-helminthic drug that has been used for approximately 50 years for tapeworm infections (3,4). In the past few years, several groups have independently found that niclosamide is a potential anticancer drug. In 2011, Sack et al (5) screened 1,280 types of pharmaceutically active compounds using high-throughput screening technology and found niclosamide was able to inhibit colon cancer metastasis. Recently, Wieland et al (6) found that niclosamide is cytotoxic, inhibits cell migration and enhances the effects of chemotherapeutic drugs in glioma cells. Another study (7) found that niclosamide inhibits the growth and induces apoptosis of acute myeloid leukemia cells in vitro and in nude mice, while cells from normal bone marrow were spared.

Niclosamide has been confirmed as a potential anticancer drug. Previous studies found that niclosamide exerted inhibitory effects on tumors of epithelial origin. However, its role in mesenchymal-derived tumors (e.g., osteosarcoma) remains to be determined. The aim of this study was to investigate the role of niclosamide in human osteosarcoma cells.

The human MG-63 and U2OS osteosarcoma cell lines were obtained from the China Center for Type Culture Collection (Wuhan, China). The cells were cultured in DMEM medium with high glucose (HyClone, Logan, UT, USA) containing 10% fetal bovine serum (Gibco, Carlsbad, CA, USA). The cells were incubated in a constant environment at 37°C with 95% air and 5% CO2. Medium renewal was performed every 2–3 days. The cells were subcultured when 90% confluence was reached.

Cells (5×105) were transferred in 6-well plates and cultured overnight. Niclosamide (0, 1, 2 and 5 μM) was added and incubated for 24 h. The medium was replaced with 0.5 ml Hoechst 33342. The plate was agitated for 10 min in the dark and analyzed using a fluorescence microscope (Olympus BX51, Olympus, Tokyo, Japan).

After various treatments, the cells were collected and fixed with cold 70% ethanol at room temperature (RT) for 1 h. The cells were then washed twice with PBS and stained with 0.5 ml PI/RNase at RT for 30 min. The samples were analyzed by flow cytometry (FC 500, Beckman Coulter, Brea, CA, USA; BD FACSAria III, Becton Dickinson, Franklin Lakes, NJ, USA).

Following treatment with various concentrations of niclosamide, the cells were collected and washed twice with PBS. Annexin V binding buffer (400 μl) and Annexin V-FITC (5 μl) were added. The cells were homogenized and incubated in the dark at 4°C for 15 min. PI (10 μl) was added and incubated for 5 min. The samples were analyzed by flow cytometry (FC 500, Beckman Coulter).

After various treatments, the medium was removed. Then, 400 μl Annexin V binding buffer, 5 μl Annexin V-FITC and 10 μl PI solution, respectively, were added. The cells were incubated at RT in the dark for 30 min and analyzed using a fluorescence microscope (Olympus BX51, Olympus).

Cells were similarly treated with various concentrations of niclosamide for 24 h, lysed, collected and centrifuged at 12,000 × g at 4°C for 30 min. The supernatants were obtained and protein concentration was determined by BCA assay.

An equivalent amount of proteins was then separated by SDS-polyacrylamide gel and transferred onto PVDF membranes. The membranes were incubated with 5% skimmed milk, followed by incubation with primary antibodies overnight at 4°C and secondary antibody at RT for 2 h. The immunoblots were developed and visualized with a Supersignal West Pico Assay kit (Thermo Fisher Scientific, Inc., Rockford, IL, USA) and autoradiography film.

Data were presented as mean (M) ± standard deviation (SD). The Student’s t-test was applied to analyze the differences between each niclosamide concentration and the control. P<0.05 was considered significantly different.

Niclosamide inhibits the proliferation of MG-63 and U2OS

To determine the inhibitory effect of niclosamide on osteosarcoma cells, a CCK-8 assay was performed. The results showed that niclosamide inhibited the proliferation of MG-63 (Fig. 1A) and U2OS (Fig. 1B) in a time- and dose-dependent manner. The IC50 values for MG-63 and U2OS were 1.5 and 5 μM, respectively.

Cell cycle analysis was performed with PI staining by flow cytometry. After MG-63 cells were treated by niclosamide for 24 h, the number of cells in the G1 phase decreased gradually, while the number of cells increased in G2 and S phase. For U2OS cells, the cell cycle was mainly arrested in G2 phase. The dose-dependent effects were obvious, especially in U2OS cells (Fig. 2).

As shown in Fig. 3, the cell nuclei were dyed blue, while the nuclei of apoptotic cells were dyed bright blue or even white. The results showed that the number of apoptotic cells increased gradually in a dose-dependent manner. Niclosamide therefore induced the apoptosis of MG-63 and U2OS cells.

Fig. 4 shows the flow cytometry results of Annexin V-FITC/PI double staining. Niclosamide induced both early and late apoptosis of MG63 and U2OS cells, which was more evident in U2OS cells.

The two cell lines were observed with a fluorescence microscope after double staining (Fig. 5). Under the light field, the appearance of cells was more sparse in the treatment groups. When the cells were observed with blue/green spectral filters, the number of apoptotic cells significantly increased in a dose-dependent manner.

Niclosamide, an antitapeworm drug, has been FDA approved for almost 50 years (3,4). In recent years, it has been suggested that niclosamide inhibited cancer growth and metastasis in epithelium-derived tumors, including prostate (8), lung (9,10), head and neck (11), and ovarian cancer (12,13). However, its effects on mesenchymal tumors (e.g., osteosarcoma) are unclear. Thus, we performed this study to determine this issue. The results of the present study demonstrate that niclosamide inhibits proliferation, induces cell cycle arrest and apoptosis in human osteosarcoma cells in a time- and dose-dependent manner.

In the development of new chemotherapeutic agents, issues that need to be addressed concern evaluation of the efficacy and safety of such drugs. Niclosamide, which has been approved by FDA for 50 years (3,4), is safe for oral ingestion. Furthermore, niclosamide induces apoptosis in acute myelocytic leukemia cells but spares cells from normal bone marrow (7). Thus, niclosamide is generally regarded as safe and efficient in many tumors, including colon cancer (5,14), breast cancer (3,4), and prostate cancer (8). In the present study, we evaluated the efficacy of niclosamide on human cancer cells in vitro. The results show that it is a potential anticancer drug for osteosarcoma.

Bcl-2, an antiapoptotic protein, inhibits a number of programs in cell apoptosis (19). Bax is identified as a bcl-2-interacting protein that inhibits the activity of bcl-2 and promotes apoptotic cell death (20). An increased bcl-2/bax ratio is usually detected when apoptotic death occurs (21). In the present study, we found that niclosamide induces apoptosis of MG-63 and U2OS cells by decreasing the bcl-2/bax ratio, a finding that was consistent with a previous study (4). Caspase-3 plays a key role in the process of apoptosis (22,23). It is associated with morphological changes of apoptosis and apoptotic body formation (22). When apoptosis occurs, caspase-3 is activated and cleaved into two subunits (23). The decreased expression of procaspase-3 in our study further confirmed that niclosamide induces apoptosis in human osteosarcoma cells.

To the best of our knowledge, this is a pilot study and some issues deserve mentioned. First, apoptosis is induced by niclosamide but the major mechanism is not clear. It is well known that niclosamide inhibits oxidative phosphorylation in the mitochondria of cestodes. Niclosamide affects cancer cells in several different pathways, including Wnt/β-catenin (24,25), mTORC1 signaling (26,27), STAT 3 (10), and ROS (28). Further studies are required to determine the exact mechanism in osteosarcoma cells. Second, it has been found that niclosamide induces apoptosis in cancer cells but spares normal cells (7). The reason for this difference in apoptosis induction between the normal cells and cancer cells remains to be identified through a more comprehensive investigation of the apoptotic mechanism. Furthermore, the present study was performed in vitro but not in vivo. A limitation of this is that certain chemicals show excellent anticancer effects in vitro but not in vivo. Animal studies and clinical studies are therefore needed before niclosamide is proven as an effective anticancer drug.

In conclusion, the present study has demonstrated that niclosamide inhibits proliferation, induces cell cycle arrest and apoptosis of human osteosarcoma cells. Niclosamide may be developed into a novel and potential chemotherapeutic drug for osteosarcoma. 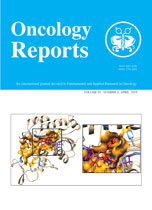