Timosaponin A‑III (TAIII) is a saponin isolated from anemarrhena asphodeloides and possesses the inhibitory effect on proliferation of multiple tumor cells. In the present study, the antitumor effect of TAIII and its underlying molecular mechanisms were investigated in vitro in T‑cell acute lymphoblastic leukemia (T‑ALL) Jurkat cells. The results demonstrated that TAIII inhibits the viability of Jurkat cells in a time‑ and dose‑dependent manner, and induces apoptosis of Jurkat cells in a dose‑dependent manner. Transmission electron microscopy demonstrated the formation of numerous autophagosomes in TAIII‑treated Jurkat cells. Furthermore, monodansylcadaverine (MDC)‑labeled autophagic vacuoles were observed following TAIII treatment by an inverted fluorescence microscope and MDC accumulation increased notably in TAIII treatment groups in a concentration‑dependent manner. B‑cell lymphoma‑2 (Bcl‑2)‑associated X (Bax) was upregulated while Bcl‑2 was reduced following TAIII treatment, indicating that the pro‑apoptotic mechanism of TAIII may be associated with upregulation of Bax. Further investigation revealed that TAIII promotes the expression of autophagy‑associated proteins Beclin 1 and LC3‑II, and inhibits the phosphoinositide 3‑kinase/Akt/mechanistic target of rapamycin kinase pathway. The present study revealed that the antitumor activity of TAIII was primarily achieved by the induction of cell apoptosis and autophagy, indicating a promising potential as a novel effective reagent against T‑ALL.

Acute lymphoblastic leukemia (ALL) is the most common malignancy in childhood and accounts for ~25% of cases diagnosed in children <15 years old (1). ALL is a heterogeneous disease that results from the malignant transformation of lymphoid progenitor cells in the bone marrow, blood and extramedullary sites (2). In children with ALL, T-cell ALL (T-ALL) accounts for 12–15%, and compared with B-cell ALL, the prognosis of T-ALL is poorer due to increased relapse risk and reduced response to salvage therapy (3). In recent years, the outcome of children with T-ALL has improved with contemporary risk and response-based treatment protocols; additionally, the 5-year event-free survival rate reported by a number of foreign research centers reached 85%, but the majority of the research centers remain at ~60% (4–6). Currently, the primary focus for first-line therapy is on reducing the burden of long-term toxicity, decreasing the chemotherapy intensity for specific low-risk patients and strengthening treatment for high-risk groups (7). Since antineoplastic agents derived from natural products exhibit notable advantages, including low toxicity, insignificant or no side-effects, targeting multiple targets and a reduced chance to generate drug resistance (8), researchers focus on searching for novel antineoplastic drugs from natural products and Chinese traditional herbs.

In the present study, the aim was to investigate the effect of TAIII on cell apoptosis and autophagy in T-ALL Jurkat cells. It was determined that TAIII induced cell apoptosis and autophagy in a dose-dependent manner. Further study revealed that TAIII promoted autophagy via inhibiting the phosphoinositide 3-kinase (PI3K)/Akt/mechanistic target of rapamycin kinase (mTOR) pathway. The present study revealed the possible antitumor mechanisms of TAIII in T-ALL, providing novel strategies and targets for T-ALL treatment.

The Human T-ALL Jurkat cell line was purchased from the Department of Pharmacology, The Institute of Hematology of Chinese Academy of Medical Sciences (Tianjin, China). The cells were maintained in RPMI-1640 medium supplemented with 10% fetal bovine serum (FBS; both from HyClone; GE Healthcare Life Sciences, Logan, UT, USA), 100 U/ml penicillin and 0.1 mg/ml streptomycin at 37°C in a humidified atmosphere containing 5% CO2. The cells cultured to 70–80% confluence were used in experiments.

CCK-8 (Dojindo Molecular Technologies, Inc., Shanghai, China) was used to determine the survival rate of cells incubated with TAIII. Jurkat cells were seeded into a 96-well plate at a density of 1×104 cells/well in RPMI-1640 containing 10% FBS. Subsequently, various concentrations of TAIII (2, 4, 8, 16 and 32 µM) were added. After the cells were incubated at 37°C in an atmosphere containing 5% CO2 for 24, 48 or 72 h, 10 µl CCK-8 solution was added to each well and incubated for an additional 4 h at 37°C. The absorbance was measured at 580 nm with Model 680 microplate reader (Bio-Rad Laboratories, Inc., Hercules, CA, USA). A blank well containing only RPMI-1640 medium supplemented with 10% FBS was used as a control.

Jurkat cells were plated into a 6-well plate at a concentration of 3×105 cells in 1 ml RPMI-1640 medium supplemented with 10% FBS. Following incubation with TAIII (0, 2 and 8 µM) at 37°C for 24 h, the cells were harvested and washed twice with ice-cold PBS. Subsequently, the cells were suspended in suspended in 400 µl 1X binding buffer (Nanjing KeyGen Biotech Co., Ltd., Nanjing, China) and double-stained with Annexin V-fluorescein isothiocyanate/propidium iodide (Annexin V-FITC/PI; Nanjing KeyGen Biotech Co., Ltd.) for 15 min in the dark at room temperature. The apoptosis cells were analyzed using a FACSCanto™ II Flow Cytometer with CellQuest software V 7.5.3 (BD Biosciences; Becton, Dickinson and Company, Franklin Lakes, NJ, USA). The apoptotic rate was calculated as the percentage of early apoptotic cells plus the percentage of late apoptotic cells.

MDC staining of autophagic vacuoles was performed for autophagy analysis (20). Jurkat cells growing on coverslips were pretreated with TAIII (0, 2 and 8 µM) for 24 h at 37°C. Following treatments, the cells were stained with 50 µM MDC in PBS for 10 min at 37°C, and then washed three times with PBS to remove excess MDC and subsequently analyzed under an inverted fluorescence microscopy (F-7000; Hitachi, Ltd., Tokyo, Japan; ×400 magnification). Fluorescence of MDC was measured at 365 nm excitation filter, 395 nm spectroscope and 420 nm absorption filter.

Statistical analyses were conducted using SPSS 21.0 software (IBM Corp., Armonk, NY, USA). The normality of data was analyzed by the Shapiro-Wilk test, and it was determined that the data were normally distributed. One-way analysis of variance was used to analyze differences between ≥3 groups, followed by a Least Significant Difference multiple range test for post-hoc comparisons. Data are expressed as the means ± standard deviations. P<0.05 was considered to indicate a statistically significant difference.

TEM was performed to detect the micro-morphological change of Jurkat cells. Results demonstrated that TAIII induces Jurkat cells to generate autophagy. As depicted in Fig. 3, Jurkat cells not treated with TAIII exhibited the normal ultrastructural morphology of nuclei, cytoplasm and organelles. The most prominent morphological change in TAIII-treated cells was the formation of numerous autophagic vacuoles in the cytoplasm, and the giant cytophagosomes filled with degraded organelles and autolysosomes were frequently observed.

Observation of vacuolization in cytoplasm by inverted fluorescence microscope

MDC-labeled autophagic vacuoles were observed by inverted fluorescence microscope. As depicted in Fig. 4, MDC-labeled autophagic vacuoles appeared as distinct dot-like structures distributing in cytoplasm or in perinuclear regions. The TAIII-treated group exhibited increased fluorescent density and more MDC-labeled particles, compared with the control group, indicating that TAIII induced the formation of the MDC-labeled vacuoles. Additionally, it was determined that vacuolization in the cytoplasm progressively became larger and denser when the concentration of TAIII increased.

To elucidate the molecular mechanism underlying the apoptosis induced by TAIII, the protein expression levels of Bcl-2 and Bax genes, apoptosis-associated molecules, were evaluated by western blot assay. The results demonstrated that the expression of Bax increases significantly while the expression of Bcl-2 decreases after Jurkat cells incubation with different concentrations of TAIII for 24 h (Fig. 6).

To clarify the mechanism underlying the autophagy induced by TAIII, western blotting was conducted to assess the effect of TAIII on the expression of Beclin 1 and LC3-II, which serve key roles in autophagy (18,20). As depicted in Fig. 7A and B, TAIII treatment caused the conversion of LC3 from the cytoplasmic form (LC3-I) into the autophagosomic form (LC3-II), while also increasing the expression of Beclin 1, in Jurkat cells in a concentration-dependent manner.

Considering that apoptosis induction is one of the key features of antitumor drugs in tumor therapy, it is important to examine the effects of TAIII on apoptosis induction and tumor growth. Apoptosis, also known as type I programmed cell death, is characterized by morphological changes, including cell shrinkage, chromatin condensation and membrane bleeding, without disruption of the plasma membrane; additionally, apoptosis is triggered by two pathways, the death receptor-mediated extrinsic pathway and the mitochondrial-involved intrinsic pathway (21–24). Bcl-2 family members are critical players in mitochondrial-involved intrinsic apoptosis (25). Bax and Bcl-2 are the most characterized apoptosis regulators in mitochondrial-associated apoptosis; furthermore, Bax is the first identified pro-apoptotic protein member of the Bcl-2 protein family, possessing promoting apoptosis activity (26). In the present study, data demonstrated that TAIII induces apoptosis of Jurkat cells in a dose-dependent manner (Fig. 2). However, consistent with the ability of TAIII to kill cells via apoptosis processes, TAIII increased the expression of Bax and decreased the expression of Bcl-2 in a dose-dependent manner (Fig. 6), indicating that the upregulated Bax and downregulated Bcl-2 expression may trigger TAIII-induced apoptosis of Jurkat cells.

Furthermore, for the first time, the present study also provides experimental evidence to demonstrate the activation of an autophagic program in Jurkat cells following treatment with TAIII. Autophagy is a genetically programmed and evolutionarily conserved process, and macro-, micro-, and chaperone-mediated autophagy are three primary autophagy forms, with macro-autophagy being the most prevalent form (27). Autophagy can regulate physiological and pathophysiological cell death, and the basic function of autophagy is to sustain survival and maintain cell homeostasis through organelles and proteins recycling (28,29). Increasing evidence indicate that autophagy is important in human cancer suppression and extensive attention has been paid to its role in tumor therapy (30,31). Previous studies indicated that TAIII is a pronounced activator of autophagy (15,16,32). In the present study, TEM determined the formation of autophagosomes, which are the representative characteristics of autophagy (Fig. 3). Furthermore, numerous MDC-labeled autophagic vacuoles were observed in TAIII-treated Jurkat cells under an inverted fluorescence microscope (Fig. 4), and flow cytometry analysis illustrated that the MDC accumulation increased notably in TAIII treatment groups in a dose-dependent manner (Fig. 5).

In order to further examine the mechanism by which TAIII regulated autophagy, various molecular studies were performed. Beclin 1, a mammalian orthologue of the yeast Apg6/Vps30 gene and a subunit of the class III PI3-kinase complex, is the first mammalian gene that was identified to be able to induce autophagy (33). LC3-II has been identified as a marker for autophagosome formation (8). Therefore, the expression levels of Beclin 1 and LC3-II in TAIII-treated Jurkat cells were measured. As depicted in Fig. 7, TAIII treatment upregulated the expression of Beclin 1 and LC3-II in Jurkat cells in a concentration-dependent manner. The results demonstrated that TAIII induces the expression of the autophagy-associated proteins Beclin 1 and LC3-II, while reducing the proliferation of Jurkat cells in vitro. There have been a substantial amount of studies indicating that PI3K/Akt/mTOR signaling are key axes involved in anticancer drug-induced autophagy (8,34,35). Further investigation was performed, with a conclusion that the PI3K/Akt/mTOR signaling pathway was inactivated by TAIII through suppressing the expression of p-PI3K, p-Akt and p-mTOR. While the preliminary observations are promising, more comprehensive and detailed studies are required to be conducted, for example, animal models in vivo or more cellular experiments, including a colony form assay, and other apoptosis indicators, including a DNA fragmentation assay.

In conclusion, the present results demonstrate that TAIII possesses antitumor activity and its antineoplastic action is associated with inhibition of proliferation, and induction of apoptosis and autophagy in Jurkat cells. Furthermore, the results demonstrated that the anticancer activity of TAIII in Jurkat cells may be through regulating apoptosis-associated proteins, including Bax and Bcl-2, and autophagy-associated proteins, including Beclin 1 and LC3-II. Furthermore, TAIII promoted Jurkat cells autophagy through the PI3K/Akt/mTOR pathway. Finally, the present data may provide a novel approach for the development of T-ALL therapy.

The datasets analyzed during the present study are available from the corresponding author upon reasonable request.

HW performed the experiments, analyzed the results and wrote the manuscript. RD and WWF were responsible for the collection and assembly of data, and the data analysis. XCZ and AML revised the manuscript and performed supplementary experiments. WDW was responsible for design of the present study and financial support. All authors read and approved the manuscript and agree to be accountable for all aspects of the research in ensuring that the accuracy or integrity of any part of the work are appropriately investigated and resolved. 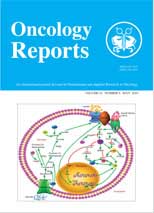