Recent experimental evidence suggests that melatonin, the major pineal hormone, might possess oncostatic properties. The present experiments were performed to verify whether melatonin might modulate the growth of androgen-dependent prostate cancer cells (LNCaP) and to obtain information on its possible mechanism of action. We have shown that melatonin, when given in the nanomolar range, significantly inhibits the proliferation of LNCaP cells; moreover, the pineal gland hormone affects cell cycle distribution by inducing an accumulation of the cells in G0/G1 and a decrease in S phase. To investigate the mechanism of action of melatonin, by RT-PCR analysis we were able to demonstrate the expression, in prostate cancer cells, of a mRNA coding for the membrane Mel1a melatonin receptor. However, by radioreceptor assay, no detectable binding of 2-[125I]iodomelatonin could be observed in membrane preparations from these cells, suggesting that the levels of translation of the mRNA for Mel1a are possibly too low to mediate the antiproliferative action of the hormone. This hypothesis is further supported by the following observations: i) melatonin analogs, specifically acting through membrane receptors (i.e., 2-bromomelatonin), were completely ineffective in modulating prostate cancer cell proliferation; ii) melatonin failed to prevent forskolin-induced cAMP accumulation. These results indicate that melatonin, at nanomolar concentrations, exerts a direct antiproliferative action on androgen-dependent prostate cancer cells, significantly affecting their distribution throughout the cell cycle. Membrane receptors do not seem to be involved in the oncostatic action of the pineal gland hormone. 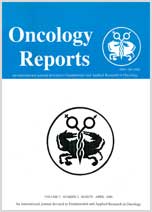