Overexpression of the E7 gene of human papillomavirus (HPV) type 16 is one of the primary causes of cervical cancer. The E7 protein can bind with DNA methyltransferase I and induce methylation of tumor suppressor genes, such as cyclin‑A1 (CCNA1), leading to suppression of their expression, and thus, cancer progression. In the present study, the confirmation of methylation‑related expression of chorionic gonadotropin subunit 3 (CGB3) and nucleolar protein 56 (NOP56) genes in 5‑Azacytidine (5'‑aza)‑treated HPV16‑positive SiHa and HPV16‑negative C33A cell lines was shown. Using methylation‑specific‑PCR and quantitative PCR, the results showed that CGB3 and NOP56 methylation significantly decreased as the 5'‑aza concentration was increased, and this was inversely associated with their expression. Moreover, overexpression of E7 contributed to the augmentation of CGB3 and NOP56 methylation levels in C33A cells, resulting in a decrease in their expression. This study extends on previous observations of E7 HPV16 oncogenic function in terms of methylation‑repressing expression in more genes, which may be wholly applied to gene therapy in cervical cancer prevention.

Cervical cancer is the fourth most frequent cancer amongst women worldwide, resulting in ~570,000 new casesin 2018, 90% of the 311,000 women with cervical cancer died (1). Human papillomavirus (HPV) is the most common sexually transmitted infection and has been recognized as an important risk factor for cervical cancer (2,3). There are >100 types of HPVs, which are categorized into low- and high-risk HPV (4-7). High-risk HPVs include HPV16 and HPV18 amongst several others, and are the causative agents in ≥90% of cervical cancer cases, whilst also being linked to >50% of other types of anogenital cancer (7-9). High-risk HPV (16 and 18)-associated cervical cancer is driven by two major viral oncoproteins, E6 and E7, which are associated with the tumor suppressor genes p53 and retinoblastoma 1, respectively, degrading them (10-15). HPV16 E6 was found to upregulate DNA methyltransferase I (DNMT1) expression and suppress p53 in cells (16-19). Moreover, previous studies have found that E7 displayed an interaction with DNMT1, which led to aberrant methylation of the cellular genome, resulting in silencing of tumor suppressor genes (20-23).

Several groups of researchers have studied the association between HPV infection and promoter methylation. Chalertpet et al (24) reported that HPV16 E7 can induce promoter methylation in CCNA1. However, Yanatatsaneejit et al (25) in 2020 demonstrated that both HPV E6 and E7 induced promoter methylation in death-associated protein kinase 1 (DAPK1) and cell adhesion molecule 1 (CADM1), respectively. Moreover, their study indicated that the E7 protein can bind to the promoter region of CADM1, and chromatin immunoprecipitation indicated that it may bind to DNMT1 through the same mechanism as CCNA1 (25). Na Rangsee et al (26), using readings from mass spectrometry followed by STRING database protein network analysis, showed that E7 possibly formed a complex with a set of transcription factors, including SP1, which links with the Yin yang 1 (YY1) transcription factor contributing to the E7 mediated hypermethylation of the genes. This highlighted the possibility of E7 combining with DNMT1 through a transcription factor to the promoter region of the CCNA1 gene, resulting in promoter methylation. Thus, studying other tumor suppressor genes that share the same sequence as the CCNA1 promoter where HPV16 E7 can bind may highlight novel potential targets. In order to investigate this possibility, bioinformatics analysis was performed and the results revealed that YY1 was found to bind to the promoter region of CCNA1. Here, other genes which shared the same YY1 binding site as CCNA1 promoter were explored. CGB3 and NOP56 were selected to investigate the induction of promoter methylation by HPV16 E7.

The CGB3 gene plays critical roles in increased expression of the CGB subunit in ovarian cancer through demethylation of the CGB promoter (27) and malignant transformation of non-trophoblastic cells (28,29). The NOP56 gene is involved in several oncogenic roles in more than five types of cancers (30); however, there is no evidence linking it to cervical cancer, to the best of our knowledge. These findings lead to the investigation of the role of HPV16 E7 in cervical cancer progression through promoter methylation of these two genes.

As methylation does not alter DNA sequences, previous studies have focused on using inhibitors of DNA methyltransferases, including 5'-Azacytidine (5-aza), which can potentially be used as anticancer agents (31-33). Aberrant DNA methylation is a biochemical process that can be reversed using demethylating agents (34). 5-aza was the first DNA methyltransferase inhibitor approved by the U.S. Food and Drug Administration for use as a chemotherapeutic against myelodysplastic syndrome, a heterogeneous bone marrow disorder (35). 5-aza covalently binds to DNMT leading to a reduction in its DNA methyltransferase activity (32). This results in the loss of methylation in specific gene regions and activates the expression of the associated genes (36-38). Moreover, several studies have reported that the association between DNA methylation and repression of gene expression can lead to cancer progression (39-41). Therefore, re-expression of methylated genes in cervical cancer cell lines following treatment with a demethylating agent, such as 5-aza, should be further investigated to assess the effect of inhibiting the methylation rate and whether it can increase the expression of tumor suppressor genes (31,42).

DNA (750 ng) for each sample was subjected to bisulfite treatment using the EZ DNA Methylation-Gold kit (Zymo Research Corp.) according to the manufacturer's protocol. Eluted DNA was used to perform MSP using methylated and unmethylated specific primers (Table I). The annealing temperature for CGB3 was 54˚C and for NOP56 it was 52˚C. The thermocycling conditions were 95˚C for 15 min; followed by 27 cycles of 95˚C for 45 sec, the respective annealing temperature for 45 sec and 72˚C for 45 sec; with a final extension step of 72˚C for 7 min. Subsequently, 10 µl PCR product was observed by gel electrophoresis using an 8% acrylamide gel and stained with SYBR reagent (Lonza Group, Ltd.). The methylated and unmethylated band intensities of each sample were visualized and measured using a Storm 840 (Amersham Biosciences) and ImageJ version 2 (National Institute of Health). The EpiTect control DNA set (Qiagen GmbH) contained positive controls for methylation and unmethylation. The experiments were performed in triplicate.

Preparation of RNA and cDNA synthesis

PCR was performed to assess the expression of each gene in SiHa and C33A cells using specific forward and reverse primers for CGB3 expression in HPV 16 E7 transfected cell. The PCR mixture contained 10X PCR buffer (Qiagen GmbH), 0.2 mM dNTPs (New England BioLabs, Inc.), 0.3 µM forward and reverse primer (Table I) and 1 U HotStartaq DNA polymerase (Qiagen GmbH). GAPDH was used as an internal control (Table II). PCR products (10 µl) were subjected to electrophoresis on an 8% acrylamide gel and stained with SYBR. The experiment was performed in triplicate.

To assess gene promoter methylation and expression levels in 5-aza-treated cells, a one-way ANOVA followed by a Dunnett's post hoc test was performed using GraphPad Prism version 5 (GraphPad Software, Inc.). P≤0.05 was considered to indicate a statistically significant difference. Student's t-tests (unpaired) was used to compare CGB3 and NOP56 expression and methylation in SiHa and C33A cells, respectively, as well as expression and methylation of CGB3 and NOP56 in the HPV 16 E7- and PC-transfected cells.

YY1 was found to be the binding to the promoter of CCNA1, CGB3 and NOP56 based on PROMO analysis (Fig. 1). Moreover, the results from JASPAR demonstrated that the binding sequence of YY1 in the CCNA1 gene shared 80% similarity in sequence, GCCATG and TCCATG (Fig. 2A), to that present in CGB3 GCCATC denoted by * in (Fig. 2B) and in NOP56 TCCATC denoted by ** in (Fig. 2C), respectively. Thus, both genes were selected for further analysis.

An association between promoter methylation and gene expression was confirmed by measuring mRNA expression levels in SiHa and C33A cells following 5-aza treatment. The C33A and SiHa cancer cells were treated continuously for 5 days with 5-aza at concentrations of 0, 3, 5 and 7 or 0, 20, 30 and 40 µM, respectively. Subsequently, DNA and RNA were extracted to measure promoter methylation and expression levels of each gene in cells following treatment with different concentrations of 5-aza.

HPV is the primary cause of cervical cancer. There are several studies showing that HPV 16 E7 is involved in promoter methylation (22,24-25). Chalertpet et al (24) showed that HPV 16 E7 can interact with DNMT1 on the CCNA1 promoter leading to its methylation. Moreover, a study by Yanatatsaneejit et al (25) showed that HPV 16 E7 could induce CADM1 promoter methylation through the same mechanism as CCNA1. In contrast, DAPK1 promoter methylation could no be induced by HPV 16 E7(25). Therefore, it was hypothesized that there would be genes other than CCNA1 and CADM1 whose promoters are methylated by HPV 16 E7, and that there would be specific transcription factors binding with HPV 16 E7 on the gene promoter. A study by Na Rangsee et al,used STRING database protein network analysis, showed that E7 possibly forms a complex with the set of transcription factors containing a YY1 domain (26). In the present study, the binding site of HPV 16 E7 on the CCNA1 promoter was analyzed to identify the putative transcription factors. According to bioinformatics analysis, a list of genes was analyzed based on the presence of the promoter sequence found in the CCNA1 gene where HPV 16 E7 binds. Interestingly the genes CGB3 and NOP56 showed positive results. Thus, in addition to CCNA1 (24) and CADM1 (25), several other tumor suppressor genes may be affected by HPV 16 E7 through the same mechanism as that observed with CCNA1 and CADM1. To assess this, CGB3 and NOP56 methylation and expression were observed in two cervical cancer cell lines, HPV 16-positive SiHa and HPV-negative C33A cells. Both CGB3 and NOP56 expression in SiHa cells had lower band intensities compared with the C33A cells, suggesting that the presence of HPV in SiHa may induce promoter methylation and decrease the expression of the genes. Moreover, the expression of CGB3 and NOP56 in cells transfected with HPV 16 E7 and PC plasmids to assess the effect of HPV 16 E7 on the expression of these genes. Both genes exhibited lower expression in HPV 16 E7 transfected cells compared with the PC transfected cells, which demonstrated that HPV16 E7 induced promoter methylation of CGB3 and NOP56, resulting in the downregulation of these genes. Thus, the expression changes in CGB3 and NOP56 following methylation inhibition using the demethylating agent 5-aza was next assessed.

5-aza interferes with DNA methylation and can be used to reactivate silenced genes in cancer (31-34). Examples of genes reactivated following 5-aza treatment include CD44, GSTP-1, BRCA1, MDR1, MUC2 and GPC3, which possess hypermethylated promoter CpG islands in tumors (31). Wong et al (48) showed that methylation-mediated silencing of gene expression can be reversed by treatment with the demethylating agent 5-aza. Reactivation of methylation-silenced genes indicates that the gene is functional, and that DNA methylation regulates its transcription (39,40). With regard to the present study, it was necessary to treat SiHa cells with higher concentrations of 5-aza compared with the C33A cells, as SiHa is a HPV positive cancer cell line, meaning that promoter methylation was more prominent in them. Therefore, the lower concentration of 5-aza may not overcome HPV-induced methylation in SiHa cells. Following treatment with 5-aza at higher concentrations of 20, 30 and 40 µM in SiHa cells, and at lower concentrations of 3, 5, and 7 µM in C33A cells for 5 days, it was found that the methylation levels of CGB3 and NOP56 were decreased leading to increased expression of both genes. At 40 µM, the re-expression of CGB3 and NOP56 genes was observed.

We are grateful to Professor Apiwat Mutirangura, Center of Excellence in Molecular Genetics of Cancer and Human Diseases, Chulalongkorn University for providing the laboratory equipment and valuable suggestions. 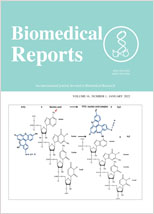