In the present study, we examined the sequential changes of diethylnitrosamine (DEN)-induced hepatocarcinogenesis in Wistar rats. After 14 weeks of DEN treatment, hyperplastic nodules developed as a consequence of the appearance of renewed hepatocytes, degenerated hepatocytes, oval cells and fibrotic changes. Total bilirubin and alanine aminotransferase levels were significantly higher in the DEN group compared to the control group throughout the experimental period. Our data may prove beneficial to future analyses of chemopreventive compounds during various stages of hepatocarcinogenesis in rats.

Hepatocellular carcinoma (HCC) is one of the most common malignancies in the world, and is the third-leading cause of mortality from cancer (1,2) and the fifth most prevalent malignancy worldwide (3). Treatment options for HCC include liver resection, radiofrequency ablation (RFA) and molecular targeted therapies, such as sorafenib (4). In spite of the advances in the treatment and early detection of HCC, the prognosis of patients with HCC is still unsatisfactory and HCC remains an intractable disease. Experimental animal models of HCC are feasible for investigating novel chemopreventive remedies for patients with chronic liver diseases who are at high risk of developing HCC. Although a number of HCC models have been generated, including hepatitis C virus (HCV) core transgenic mice (5), Pten-deficient mice (6) and activation-induced cytidine deaminase (AID)-transgenic mice (7), these models require intricate genetic manipulation.

Diethylnitrosamine (DEN) is present in tobacco smoke, water, cured and fried meals, agricultural chemicals, cosmetics and pharmaceutical agents (8) and is commercially available for experimental use. DEN is an established powerful hepatocarcinogen in rats, which possibly works by altering the DNA structure, forming alkyl DNA adducts, and inducing chromosomal aberrations and micronuclei in the liver (9,10). It has also been reported that oxidative stress plays a pivotal role during carcinogenesis (11). Although a single injection of DEN followed by partial hepatectomy coupled with 2-acetylaminofluorene (2-AAF) is an established procedure for developing HCC in rodents (12), the sequential administration of DEN for a number of weeks has also been employed for inducing HCC (13,14). However, sequential changes in the liver in DEN-based hepatocarcinogenesis have not been clarified. In this study, we analyzed DEN-induced hepatocarcinogenesis in rats by chronologically evaluating biological parameters and liver tissues following treatment with DEN.

Male Wistar rats weighing ~200 g were purchased from Japan SLC, Inc. (Hamamatsu, Shizuoka, Japan). All animals received humane care and the experimental protocols were approved by the Tottori University Animal Ethics Committee. The animals were housed two per cage with rice husks for bedding in an air-ventilated room under a 12-h light/dark cycle with a constant temperature (22°C) and humidity (55%). The animals were allowed access to food and tap water ad libitum during the experiment. The rats were randomly divided into two groups and intraperitoneally injected with DEN (40 mg/kg body weight) in phosphate-buffered saline (PBS) (DEN groups, 4 rats were assigned to each treatment week) or PBS (control groups, 2 rats were assigned to each treatment week) weekly for 4, 6, 8, 10, 12 and 14 weeks (Fig. 1). Body weights were monitored weekly throughout the experimental period. One week following the last treatment, the rats were sacrificed under anesthesia by pentobarbital. Blood samples were collected via cardiac puncture and serum samples were stored at −30°C until analysis. Immediately after the livers were excised, they were weighed and divided into two sections for histological examination in 10% neutral buffered formalin and for protein extraction at −80°C.

The rat liver tissues were fixed in 10% neutral buffered formalin and paraffin embedded. For histologic analysis, serial sections (5 μm) were stained with hematoxylin and eosin (H&E). Neoplastic nodules and HCC were classified on the basis of Japanese criteria (15). Degenerated hepatocytes, oval cells, renewed hepatocytes and hyperplastic nodules were quantified as follows: grade 1 when <5%, grade 2 when 5–50%, and grade 3 when >50% in the field. For immunohistochemistry with the PCNA and GST-P antibodies, Histofine® Simple Stain Rat MAX PO was employed (Nichirei Biosciences Inc., Tokyo, Japan). Briefly, after routine dewaxing with xylene and hydration through a graded ethanol series, the sections were incubated with 3% hydrogen peroxide solution for 15 min at room temperature to quench endogenous peroxidase activity. After washing in gently-running tap water, the sections were rinsed with PBS, and incubated with primary antibodies overnight at 4°C. After rinsing with PBS, the sections were incubated with biotinylated secondary antibody for 30 min at room temperature. The peroxidase activity was developed with DAB solution (Vector Laboratories, Inc., Burlingame, CA, USA). Counterstaining was performed with hematoxylin. The PCNA labeling indices were represented as the percentage of positively stained nuclei by counting 1,000 cells in the field at x400 magnification. The GST-P-positive area was measured on images captured by a charge coupled device (CCD) camera on a Windows® computer.

All data were expressed as the means ± standard deviation (SD). Statistical analysis was performed by the unrelated t-test or the Mann-Whitney U test. A p-value <0.05 was considered to indicate a statistically significant difference.

All rats survived throughout the experimental period. Chronological changes in the liver and body weights are demonstrated in Fig. 2. After 12 and 14 weeks of the treatment, the relative liver weight (liver weight/body weight) in the DEN group was significantly higher than that in the control group, presumably due to the development of liver tumors in the DEN group. Although serum AST levels did not differ between the two groups, total bilirubin and ALT levels were significantly higher in the DEN group than in the control group throughout the experimental period, possibly reflecting liver injury induced by DEN (Fig. 3).

Summary of quantified histological changes after the DEN treatment.

Expression levels of GST-P and PCNA

Among the GSTs, a family of detoxification enzymes that catalyze the conjugation of glutathione with a large number of carcinogens, GST-P has been used as a reliable tumor marker for experimental hepatocarcinogenesis in the rat (16). PCNA is an essential regulator of the cell cycle, whose expression has been a useful tool for studying cell proliferation, including cell proliferation in the liver (17). We sought to investigate the expression levels of GST-P and PCNA during hepatocarcinogenesis induced by DEN. As expected, the control liver did not express a significant amount of GST-P when evaluated by immunohistochemical or western blot analysis (Fig. 5A and B). GST-P-positive foci started to appear after 6 weeks of the DEN treatment and the expression levels of GST-P were significantly increased thereafter throughout the experimental period (Fig. 5A and B). The expression levels of PCNA were sequentially increased after the treatment with DEN when analyzed by immunohistochemical and western blot analysis (Fig. 6A and B).

DEN-based HCC models have been utilized for investigating the beneficial effects of anti-carcinogenic compounds in vivo. Since the sequential changes in the liver following the administration of DEN have not been clarified, we evaluated them by sequentially examining biological parameters and liver tissues. After 14 weeks of DEN treatment, hyperplastic nodules developed as a consequence of the appearance of renewed hepatocytes, degenerated hepatocytes, oval cells and fibrotic changes. Unfortunately, we did not observe the rats beyond 14 weeks. It is plausible that longer treatment with DEN could lead to the development of HCC. In addition, since we did not investigate the molecular mechanisms involved in the histological changes following treatment with DEN in this study, future intensive studies are necessary to unveil these issues.

Compounds which have potential chemopreventive effects on the liver include acyclic retinoid (ACR), caffeine, capsaicin, cinnamaldehyde, curcumin, diallyl sulfide (DAS), eicosapentaenoic acid (EPA), epigallocatechin-3-gallate (EGCG), genistein, lycopene, resveratrol, silymarin and sulforaphane (SFN) (18). Since the anti-hepatocarcinogenic effects of these compounds have become known mainly from in vitro experimental studies and epidemiology, hepatocarcinogenic models in rats would be useful for testing these compounds in vivo. As shown in the present study, the sequential analysis of DEN-induced hepatocarcinogenesis may be valuable for investigating the effects of compounds at variable stages of hepatocarcinogenesis.

We would like to thank Mr. Yujirou Ikuta for his technical assistance. 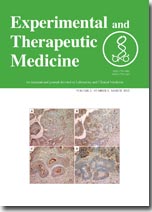