Methicillin-resistant Staphylococcus aureus (MRSA) is a bacterium responsible for a number of infections in humans that are difficult to treat, and as a result, is a substantial contributor to morbidity and mortality. In the present study, in search of natural products capable of inhibiting this multidrug-resistant bacterium, we investigated the antimicrobial activity of rhein isolated from Rheum palmatum L. (Polygonaceae) against 16 different strains of the bacterium. New antimicrobial activity was found using the paper disc diffusion method [minimal inhibitory concentrations (MICs)], MTT test and checkerboard dilution test. Against the 16 strains, the disc diffusion test was in the range of 20-29 mm and the MICs of rhein were in the range of 7.8-31.25 µg/ml. From these results we performed the checkerboard test to determine the synergism of rhein in combination with ampicillin (AM) or oxacillin (OX) against all strains. The combined activity of rhein and the two antimicrobial agents (AM and OX) against all strains resulted in a fractional inhibitory concentration index ranging from 0.28-1 and from 0.18-1, respectively. The effect of rhein with AM and OX was found to be synergistic or partially synergistic. We found that rhein reduced the MICs of AM and OX. Rhein in combination with AM or OX could lead to the development of new combinations of antibiotics against MRSA infection.

Methicillin-resistant Staphylococcus aureus (MRSA) is a serious and urgent clinical problem worldwide. Few new drugs are available against MRSA, since it has the ability to acquire resistance to most antibiotics. An effective method for treating MRSA may be to develop antibiotics from natural products which are likely to have lower toxicity and fewer side effects. Rheum palmatum, popularly known as Dahuang, has traditionally been used as an oriental folk medicine. Rhein naturally occurs in anthraquinone (1,3,8-trihydroxy-6-methyl anthraquinone) (Fig. 1), which is found in Rheum palmatum and related plants such as rhubarb. Anthraquinone components include aloe-emodin, rhein, emodin, chrysophanol and physcion (1). Rhein is used for treating numerous complaints, including constipation, jaundice, gastrointestinal hemorrhage and ulcers (2). It has also been shown to have good antitumor (3–6) and anti-inflammatory properties (7,8), anticancer (9), purgative (10), nephric protection (11,12), liver protection (13), antimicrobial and hemostatic properties (14,15). As such, it has been widely used for the treatment of gastrointestinal diseases, hepatitis and chronic renal failure. However, little is known about its antimicrobial effects on MRSA. Thus, we present the current study demonstrating the antimicrobial activity of rhein against MRSA and methicillin-sensitive S. aureus (MSSA) strains, as well as its synergistic effect.

Among the 16 S. aureus strains used in this study, 14 clinical isolates of MRSA were obtained from 14 different patients at Wonkwang University Hospital (Iksan, Republic of Korea). The other two strains used were S. aureus ATCC 33591 (methicillin-resistant strain) and S. aureus ATCC 25923 (methicillin-susceptible strain). ATCC 25923 (American Type Culture Collection, Manassas, VA, USA) and ATCC 33591 were commercially purchased. Before use, all bacteria were stored in 30% glycerol and frozen at −70°C. The bacteria were cultured in Mueller-Hinton broth (MHB) and Mueller-Hinton agar (MHA) (Difco Laboratories, Baltimore, MD, USA). Bacteria were suspended in MHB and then incubated at 37°C for 24 h.

The disc diffusion method was performed as described by the Clinical and Laboratory Standards Institute (CLSI) and by using a modified agar well diffusion method (CLSI, 2001) (16). Bacterial strains grown on MHA at 37°C for 18 h were suspended in MHB and adjusted to a turbidity of 0.5 on the McFarland standard scale (approximately 1.5×108 CFU/ml). The MHA was poured into Petri dishes and inoculated with 100 μl of the suspension. Sterile paper discs (diameter, 6 mm; Tokyo Roshi Kaihsa, Japan) were punched into the agar and each well was filled with 500 and 250 μg of each drug. The dissolution of the ampicillin (AM), oxacillin (OX) and rhein was facilitated by the addition of 50% (v/v) DMSO (50% DMSO was not active against all strains) (DMSO; Sigma, St. Louis, MO, USA). AM and OX were used as the positive controls, and the discs treated with DMSO were used as the negative control. The plates were placed in an incubator at 37°C for 18 h in the dark. The inhibition zone diameter around each of the discs was measured and recorded at the end of the incubation period.

The minimum inhibitory concentration (MIC) was determined using the broth micro-dilution method according to the CLSI guidelines, 2000 (17). Briefly, the inoculation of the microorganisms was carried out on 24 h broth cultures, and the suspensions were adjusted to a 0.5 McFarland standard turbidity (approximately 1.5×108 CFU/ml). Final inoculum size was adjusted to 1.5×106 CFU/ml. These serially diluted cultures were then incubated at 37°C for 18 h. MIC was defined at the lowest concentration of AM, OX and rhein. At the end of the incubation period, the well plates were visually examined for turbidity. Cloudiness indicated that bacterial growth had not been inhibited by the concentration of the antimicrobial agent contained in the medium.

The synergistic combinations were investigated in the preliminary checkerboard method performed using the MRSA and MSSA strains, and one clinical isolate strain via MIC determination, according to the CLSI guidelines (18). The MIC was defined as the lowest concentration of drug alone or in combination that inhibited the visible growth. The in vitro interaction was quantified by determining the fractional inhibitory concentration (FIC). The FIC index was calculated as follows: FIC = (MIC of drug A in combination/MIC of drug A alone) + (MIC of drug B in combination/MIC of drug B alone). FIC indices (FICIs) were interpreted as follows: <0.5, synergy; 0.5–0.75, partial synergy; 0.76–1.0, additive effect; >1.0–4.0, indifference; and >4.0, antagonism. Finally, the varying rates of synergy between the two agents were determined. All experiments were independently repeated three times.

A colorimetric assay based on MTT for the rapid detection of the presence of bacteria was performed as previously described (19–21). Briefly, a stock solution of 5 mg/ml MTT (Sigma) was prepared in phosphate-buffered saline and kept at −70°C. A final concentration of 1 mg/ml of MTT was used in the assay. Following 24 h of incubation a 37°C, 20 μl of the yellow MTT was added to the 96-well microtiter plate (0.3 ml volume) and incubated for an additional 20 min. The presence of a blue color indicated the presence of bacteria.

Table I shows the S. aureus strains used in the experiments. Table II shows the means of inhibition zones produced against the tested bacteria ranged between 20 and 29 mm. The growth of all the tested strains of MRSA and MSSA was inhibited at 500 and 250 μg/disc. As shown in Table III, rhein demonstrated antimicrobial activity against all the tested strains of MRSA as well as the MSSA strain. The MICs of rhein against S. aureus ranged from 7.8–31.25 μg/ml. As shown in Tables IV and V, tests were performed to determine the action of rhein alone as well as its synergistic action with AM or OX against the MRSA clinical isolate, the standard MRSA strain or the standard MSSA strain. Rhein lowered the MICs of AM and OX against the MRSA strains. For the standard MSSA strain, rhein lowered the MICs of both AM and OX. The combined activity of rhein and the two antimicrobial agents (AM and OX) against all strains resulted in a FICI ranging from 0.28–1 and from 0.18–1, respectively. In conclusion, the combination effect of rhein with AM and OX was found to be synergistic or partially synergistic.

The S. aureus strains used in the experiments.

The antimicrobial activity (as inhibitory zone diameters) of rhein, AM and OX against the S. aureus strain.

a Staphylococcus aureus strains from the Department of Plastic Surgery, Wonkwang University Hospital, Iksan, Korea. ND, no detected activity at this concentration. AM, ampicillin; OX, oxacillin.

The MICs of rhein, AM and OX against the S. aureus strain.

Result of the combined effect of rhein and AM against S. aureus.

Result of the combined effect of rhein and OX against S. aureus.

In the present study, we investigated the antimicrobial activity of rhein against clinical isolates of MRSA and a standard MSSA strain. We report that the rhein agent also shows synergistic activity with AM and OX against MRSA. When combined, these antibiotic effects were dramatically increased. While the results obtained in the present study cannot currently be applied in clinical practice, we consider that the combination treatment of rhein isolated with AM or OX will prove to be helpful in treating MRSA and MSSA. Further medicinal, clinical and mechanism studies are required to verify the mechanisms by which rhein enhances the antibacterial activity. At present, the continued emergence of multi-drug resistant bacteria and the infectious diseases caused by them are serious global problems. It is hoped that it will be possible to reduce the use of existing antibacterial drugs and increase the use of natural product drugs, such as rhein. At this point in time, the product is still under investigation. In our study, rhein markedly lowered the MICs of AM and OX against the two MRSA strains and one MSSA strain. While the product is still under investigation, the present results are promising and may help to promote the use of natural products rather than antibiotics.

This study was supported by the Sunchon National University Research Fund (2011). 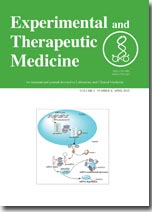