The clinical protocol was approved by the Institutional Medical Ethics Committee of the Central Hospital of Huangshi and conducted according to the ethical guidelines outlined in the Declaration of Helsinki. A total of 72 consecutive patients from the Department of Cardiology of the Central Hospital of Huangshi, China, were enrolled in this study. Patients were allocated into two groups: hyperlipidemic group [low-density lipoprotein cholesterol (LDL-C) ≥4.14 mmol/l, n=72] and control group [LDL-C <4.14 mmol/l, n=32] that was not receiving treatment with statins or other drugs for reducing lipids. All patients in this study underwent coronary angiography after admission. The patients without coronary artery stenosis served as a control group without hyperlipidemia. Exclusion criteria included patients with coronary artery disease, cardiac dysfunction, fever, peripheral vascular disease, liver or renal dysfunction, autoimmune disease, cancer, surgery or stroke within 6 months, a history of infection, chronic inflammation, abnormal thyroid function, imbalance of electrolytes and use of anti-inflammatory drugs such as corticoids, statins and other drugs for reducing lipid as well as nonsteroidal anti-inflammatory drugs excluding aspirin. The hyperlipidemic group received a treatment of 20 mg/day atorvastatin for 3 months. After three months, the serum lipids, high-sensitivity CRP (hs-CRP) and HMGB1 of the patients were measured again.

Statistical analysis was performed with the SPSS 13.0 (SPSS Inc., Chicago, IL, USA). All continuous values are expressed as means ± SD. The Chi-square test or Fisher’s exact test was used to compare proportions. The Student’s t-test or paired t-test was used for comparisons between two groups. Statistical significance was defined as P<0.05.

Clinical characteristics of the patients

Characteristics of the hyperlipidemic and control patients.

Effect of atorvastatin on hs-CRP and HMGB1 levels

In addition, we found that atorvastatin, a classic drug for reducing cholesterol production by inhibiting 3-hydroxy-3-methyl-glutaryl-coenzyme A (HMG-CoA) reductase, could decrease serum HMGB1 and hs-CRP levels. Previous studies have demonstrated that statins reduce pro-inflammatory cytokines such as TNF-α, IL-6, CRP and there is crosstalk between HMGB1 and other pro-inflammatory cytokines, such as TNF-α, IL-6 and CRP (16–18). Recently, studies have reported that atorvastatin downregulates the expression of HMGB1 in brain ischemia and inhibits HMGB1-induced vascular endothelial activation (19,20). These results suggest that atorvastatin inhibits the expression of pro-inflammatory cytokines including HMGB1. A previous study showed that statins could provide cardioprotection for anti-atherosclerotic therapy (21). Thus, we speculated that the anti-atherosclerotic effect of atorvastatin may be attributed to the inhibition of HMGB1 in hyperlipidemia.

In conclusion, the present study showed that serum HMGB1 levels were increased in patients with hyperlipidemia, and that atorvastatin reduces serum HMGB1 levels which may be attributed to the decrease in serum lipids. Limitations were present in the present study. Overall, our study included only a small group of Chinese patients, therefore a future study with a large cohort is required. The precise mechanisms underlying our observation and their clinical relevance will require future elucidation.

This study was supported by the Subject of Health Department of Huangshi City of China (no. 2012-139). 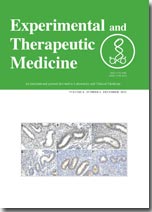