Growth hormone deficiency (GHD), caused by problems arising in the pituitary gland, is a medical condition in which the body does not produce sufficient growth hormone (GH). GH is a polypeptide hormone that stimulates growth and cell reproduction. Idiopathic short stature (ISS) may be one of the causes of short stature (1). This condition refers to short children without an identifiable disorder of the GH/insulin-like growth factor axis or other endocrine, genetic or organ system disorders (2). GHD is associated with a marked variety of neuroanatomical abnormalities, including a hypoplastic pituitary gland, as identified by magnetic resonance imaging (MRI). Neuroimaging has become an essential part of the diagnostic process for children with GHD in measuring gland size due to the excellent contrast and high spatial resolution (3,4). Currently, the majority of pituitary gland measurements are focused on height, which is considered to be the standard indicator for pituitary gland size (5,6). However, the size and shape of the normal pituitary gland vary considerably and are also affected by age, gender and the hormonal environment (5–10). The variation in shape of the pituitary gland between individuals means that any assessment of size is likely to be subject to a high degree of imprecision unless a true volume is measured (11).

In the present retrospective study, high-field strength, high-resolution and thin-section 3D MRI sequences were applied to directly measure the volume and height of the pituitary gland in healthy children and children with GHD or ISS. The volumetry values in the assessment of pituitary gland size and in the diagnosis of pituitary gland lesions were investigated.

MRI scans were processed with a Syngo MAGNETOM Verio system (Siemens). In all the cases, the volume was measured on the sagittal image as the boundary is simple to define in this orientation. The regions of interest (ROI) were determined layer-by-layer with manual tracing using a mouse-guided cursor (Fig. 1A and B). The regions did not include the pituitary stalk, but included the neurohypophysis. The volume of the pituitary gland was then calculated using the section thickness and the ROI of every layer. The midsagittal height was obtained from the straight-line distance from the adenohypophysis midpoint of the upper edge to the edge of the gland in the sella turcica bottom (Fig. 1C), according to the traditional method described by Fujisawa (17). A comparison was performed between the short stature children and normal children. Pituitary gland volumes below the minimum value of the corresponding normal range were regarded as dysplastic.

A total of 75 Chinese children aged between 1 and 19 years (mean age, 9.39 years; Table I) were recruited. The individuals had no clinical evidence of pituitary gland lesions (intracranial lesions or endocrinological abnormalities) (18), a history of asphyxia or short-term delivery within 35 weeks. No abnormal observations were identified on routine MRI examination.

A total of 55 Chinese children with short stature were included in the study, with ages ranging between 0 and 14 years (mean age, 8.6 years; Table II). These children were further divided into two groups. Group 1 included 32 children with GHD, while group 2 consisted of 23 children with ISS. The inclusion criteria for children with GHD were as follows: i) Height was below the third percentile among children of the same age and gender; ii) growth rate was <4 cm/year; iii) bone age lagged behind the actual age by two years (Greulich and Pyle standards); iv) serum GH peak was <10 μg/l when stimulated with drugs (clonidine and levodopa) in the GH secretion test; v) levels of serum thyroxine, triiodothyronine and thyroid stimulating hormone were normal; and vi) patients were not affected by genetic metabolic diseases, chromosomal aberrations or any other diseases. The inclusion criteria for children with ISS were the same as the aforementioned standards, with the exception of a serum GH peak of >10 μg/l when stimulated with clonidine and levodopain in the GH secretion test.

Age and gender distribution of children with GHD or ISS.

Written informed consent was obtained from all the parents or guardians of the children, and all the experimental procedures in the study were approved by the Ethical Committee of Shandong Provincial Hospital of Shandong University (Jinan, China). All the children underwent brain MRI for sellar evaluation between August 2011 and June 2012.

Statistical analysis was performed using SPSS software version 17.0 (SPPS, Inc., Chicago, IL, USA). P<0.05 was considered to indicate a statistically significant difference. The normal range of the pituitary gland volumes was expressed as the mean ± standard deviation. The Student’s t-test was used to evaluate the repetition test, while Pearson’s correlation coefficient and regression analyses were performed to evaluate the correlations between the volume and height of the pituitary glands.

Effect of age on pituitary gland height and size

Volumes and heights of the pituitary gland in healthy children (mean ± standard deviation).

Pituitary gland volume is an improved indicator for GHD and ISS

Comparison between pituitary volumes and heights in children with GHD or ISS.

Currently, MRI measurements of the pituitary gland volume include 2D geometric methods, voxel-based morphometry and manual surveying and mapping of ROIs. Roldan-Valadez et al (21) hypothesized that the traditional geometric method should be replaced by 3D volumetric measurement that had higher accuracy and smaller discrepancy. Voxel-based morphometry is only used to measure the anatomical structure with unclear demarcation, as this technique is poor for the measurement of fine structure, but has the advantages of being simple, saving time and labor. The ROI method may be used for more precise positioning measurements based on anatomical and histological boundaries, and is therefore the in vivo measurement closest to the true size of the pituitary gland. Cui et al (23) analyzed the pituitary gland volumes in healthy Chinese individuals over the age of 18 years, and their results indicated that 3D MRI clearly demonstrated the morphology and precisely measured the volume of the pituitary gland. However, relatively low MRI field strength was used in their studies, as well as a scanning section thicker than 2 mm and a 2-mm scanning interval. In addition, the authors did not investigate the pituitary gland volume in healthy people aged <18 years-old. Takano et al (12) identified that there was a growth spurt in children in the early teenage years, and this spurt was more prominent in females, in a study of 199 healthy Japanese adolescents below the age of 20 years. Similarly, the study by Takano et al was also performed with a low MRI field strength. Fink et al (11) also demonstrated that assessments using sagittal or coronal data reconstructions produced almost identical results. In the present study, 3D MRI volumetry was used to estimate the pituitary gland volume in healthy children and children with short stature. Firstly, the pituitary gland surface area on each outlined region was determined using the layer-by-layer method on sagittal imaging, from which the volume was calculated by multiplying the surface areas by the thickness of the layers (24).

The results obtained from healthy children demonstrated a gradual linear increase in pituitary gland volume over the first ten years of life, which was consistent with the study by Fink et al (11). The volume of the pituitary gland exhibited a growth trend with age prior to the age of 20, and there was evidence of a growth spurt in children in the early teenage years (10–14 years old), which was more prominent in females compared with males. These results indicated that the growth of the pituitary gland was more prominent in adolescents, particularly in females. The largest difference in pituitary gland volume was observed between the females and males at the ages of 10–14 years, which was consistent with the studies by Takano et al (12). However, the volume of the pituitary gland appeared to differ between Chinese and Japanese adolescents at the ages of 10–14 and 15–19 years. The reasons for the difference may be due to sample sizes or ethnic differences.

In conclusion, 3D MRI volumetry was used in the present study to elucidate the developmental characteristics of the pituitary gland in healthy children. The results indicated that the measurement of pituitary gland height was not able to replace volumetry in the assessment of pituitary gland size. Reference data provided by 3D MRI were valuable in the diagnosis of short stature, however, the evaluation required an association with neuroimaging and clinical functional abnormalities of the pituitary gland. The main limitation of the present study was the small sample size; thus, future, large scale studies are required to determine the clinical utility of these results.

The study was supported by grants from the Shandong Province Science and Technology Development Plan (nos. 2012GSF11820 and 2012YD18053). 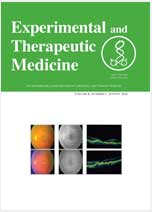