This study investigated the effects of naringin on platelet aggregation and release in hyperlipidemic rabbits, and the underlying mechanisms. The safety of naringin was also investigated. The rabbits were orally administered 60, 30 or 15 mg/kg of naringin once a day for 14 days after being fed a high fat/cholesterol diet for four weeks. Following the two weeks of drug administration, the degree of platelet aggregation induced by arachidonic acid, adenosine diphosphate and collagen was significantly reduced by naringin at certain doses compared with those in the rabbits of the model group (P<0.01). The levels of P‑selectin and platelet factor 4 (PF4) also decreased following treatment with naringin compared with those of the model group. Certain doses of naringin significantly reduced the total cholesterol (TC) levels and elevated the ratio of high‑density lipoprotein cholesterol to TC compared with those in the model group, and significantly decreased the cytosolic free calcium concentration ([Ca2+]i). No significant difference in the coagulation function was observed between the control and drug‑treatment groups. These results indicate that naringin improved platelet aggregation and inhibited the excessive release of P‑selectin and PF4 in hyperlipidemic rabbits. This study suggests that the antiplatelet effect of naringin may be due to its ability to regulate the levels of blood cholesterol and [Ca2+]i in platelets. Naringin also did not cause bleeding in the hyperlipidemic rabbits.

Platelets are central mediators of primary homeostasis and mediate pathological thrombosis. Activated platelets stimulate thrombus formation in response to the rupture of an atherosclerotic plaque or endothelial cell erosion, thereby promoting atherothrombotic disease (1). Antiplatelet treatment remains the main therapy for patients with thrombosis and atherosclerosis (2,3). Antiplatelet treatment for the prevention of serious vascular events (including nonfatal myocardial infarction and nonfatal stroke among a large number of patients with a high risk for occlusive vascular events) and vascular death is an important strategy, according to the results of a collaborative meta-analysis of randomized trials (4). However, the number of studies concerning the side-effects attributed to antiplatelet agents (including aspirin, ticlopidine, clopidogrel, abciximab and eptifibatide) is increasing. These negative effects include allergic/hypersensitivity reactions and gastrointestinal disorders, including ulceration of the gastric lining and hemorrhage, as well as increased drug resistance in certain patients (5,6).Studies have shown that various traditional Chinese medicines have antiplatelet activity (7,8). Naringin, a type of flavonoid from Fructus Aurantiin, has numerous biological activities, including anti-inflammatory (9,10) and antioxidant (11,12) activities, regulation of glucose, and lipid metabolism (13–15).

The present study explored the effect of naringin on the aggregation and release of activated platelets in hyperlipidemic rabbits.

Male New Zealand white rabbits (weight = 2.0–2.5 kg) were provided by Beijing Animal Breeding Center (Beijing, China). The animals were acclimated for at least one week under standard conditions with free access to a standard diet and water. All procedures were approved by the Animal Care and Use Committee of Tianjin University of Traditional Chinese Medicine (approval number: TCM-LAEC2013007; Tianjin, China) and conformed to the Guide for the Care and Use of Laboratory Animals published by the U. S. National Institutes of Health (NIH publication number 85–23, revised 1996).

A total of 30 male rabbits were divided into two groups (control group and group M) according to the total cholesterol (TC) in their plasma. The rabbits in the control group (six males) were fed with a basic diet during the experimental period. The rabbits in group M (24 males) were fed a high fat/cholesterol diet (1% cholesterol, 10% vegetable oil and 89% base animal feeds) for four weeks. The amount of daily diet for each animal was restricted to 50 g, and water was supplied ad libitum. After four weeks, blood was collected from the ear edge vein of the rabbits. The 24 hyperlipidemic rabbits in group M were selected based on their significantly higher TC values compared with those of the control group and then were divided into four groups, namely, model group (model), high-dose naringin treatment group (NH; 60 mg/kg/day), medium-dose naringin treatment group (NM; 30 mg/kg/day), and low-dose naringin treatment group (NL; 15 mg/kg/day).

The rabbits in the treatment groups were orally administered naringin once a day for 14 consecutive days. The rabbits in the four groups, with the exception of the control group, continued to be fed a high fat/cholesterol diet five times a week to maintain the model.

The rabbits were locally anesthetized with 2% lidocaine (1 ml), and then blood was collected from the common carotid artery (CCA) 2 h after the final drug administration and anticoagulated with citrate (3.8%; 1:9, v/v). PRP was obtained by centrifugation at 800 rpm for 15 min, and the remaining blood was further centrifuged at 3,500 rpm for 10 min to prepare the PPP. The platelet concentration of the PRP was adjusted to 3–5×109 platelets/ml using the PPP.

Platelet aggregation was measured using an aggregometer (570-VS; Chrono-Log Corp.) according to the methods of Born and Cross (16). In a typical procedure, 0.25 ml PPP and PRP were placed in separate cuvettes and stirred with a rotor at 37°C for 5 min. Platelet aggregation was induced by the addition of ADP, AA or COLL (final concentrations of 13 μM, 500 μM and 10 mg/l, respectively). The results were recorded as light transmission at maximum aggregation following the addition of an aggregating agent. Data are expressed as the percentage maximum aggregation.

Determination of the FIB levels, PT and APTT

Blood was collected from the CCA and anticoagulated with citrate (3.8%; 1:9, v/v). The plasma was separated by centrifugation at 3,500 rpm for 10 min. The levels of FIB in the plasma, and the PT and APTT were determined with an automatic blood coagulation analyzer (Diagnostica Stago STart 4 hemostasis analyzer; Stago Diagnosis Technology Co., Ltd.)

Blood was collected from the CCA. Following placement in a water bath for 30 min at 37°C, the serum was separated by centrifugation at 3,500 rpm for 15 min. The levels of serum TC, TG, HDL and LDL were determined with an automatic analyzer (7020; Hitachi, Tokyo, Japan).

Determination of the levels of PF4 and P-selectin

Blood was collected from the CCA. Following placement in a water bath for 30 min at 37°C, the serum was separated by centrifugation at 3,500 rpm for 10 min. The levels of serum P-selectin and PF4 were determined with the ELISA kits according to manufacturer’s instructions.

Effects of naringin on the platelet aggregation induced by ADP, AA and COLL

Effects of naringin on the platelet [Ca2+]i

Effects of naringin on the APTT, PT, and FIB levels in the hyperlipidemic rabbits

In the hyperlipidemic rabbits, the levels of FIB significantly increased, whereas the PT and APTT significantly decreased compared with those of the control group (P<0.01). Naringin reduced the levels of FIB in the plasma and prolonged the PT and APTT to improve the blood hypercoagulable state of the hyperlipidemic rabbit; however, no significant difference was identified in the results for the naringin groups compared with those of the control group (Fig. 4). This indicated that naringin could not cause bleeding.

Effects of naringin on the blood lipid levels of the hyperlipidemic rabbits.

Hyperlipidemia reportedly triggers platelet activation, lipid peroxidation, platelet granulocyte aggregation and platelet aggregation. Sener et al (17) demonstrated that the expression of P-selectin on the surface of platelets in patients with hyperlipidemia is highly associated with the levels of TG, LDL and HDL-cholesterol. Thus, blood lipids and platelet activation play critical roles in the pathological link of thrombotic diseases to the incidences of other cardiovascular events (18). Naringin has pharmacological activity in the cardiovascular system and plays a role in the regulation of blood glucose and blood lipids. Naringin inhibits the oxidative susceptibility of LDL, which has a certain inhibitory effect on the formation of atherosclerosis (19). The present study focused on the effects of naringin on platelet activation and the coagulation function in the hyperlipidemic pathological state.

The present study demonstrated that naringin exerted positive modulatory effects on the levels of blood lipids in hyperlipemic rabbits. The medium and high doses of naringin significantly decreased the TC levels and increased the proportion of HDL in the TC. Naringin also reduces the sensitivity of platelets by adjusting the levels of blood lipids, thereby achieving the desired effect of antiplatelet aggregation.

As a second messenger, calcium is involved in platelet deformation, aggregation and the release reaction to stimuli. Increased platelet [Ca2+]i activates myosin light chain kinase, which leads to platelet deformation and shrinkage. Multiple Ca2+-dependent proteases play an important role in platelet activation. Ca2+ activates phospholipase C and phospholipase A2, leading to the release of thromboxane A2 and platelets. The activation of protein kinase C, which is involved in the release and aggregation of platelets and AA metabolism, requires the participation of Ca2+. The activation state of platelet [Ca2+]i in the hyperlipemic animal model in the present study was significantly higher than that in the control group. The results of the present study confirm that naringin reduces the [Ca2+]i, indicating that naringin inhibits platelet contraction and release by decreasing the platelet [Ca2+]i concentration and thereby inhibiting myosin light chain phosphorylation.

This study is supported by the ‘Program for Innovative Research Team in University’ (no. IRT1276) from the Ministry of Education of the People’s Republic of China for research on traditional Chinese medicine for the prevention and treatment of cardiovascular disease. 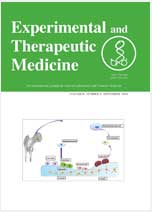