Type 1 diabetes (T1D) is characterized by the destruction of pancreatic β-cells, which results in insulin deficiency. The etiology and pathogenesis of the disease remain to be fully elucidated. Insulin replacement is currently the only treatment for T1D (1).

Blood glucose is tightly maintained within its normal range by numerous factors that affect glucose production and utilization. The key hormones involved in blood glucose regulation mainly include insulin, glucagon, epinephrine, glucocorticoid and growth hormone (2). As the primary organ of biochemical metabolism, the liver serves an important role in glucose homeostasis (3). Net hepatic glucose production is the summation of gluconeogenesis, glycogenolysis, glycogen synthesis and glycolysis, among other metabolic pathways (4). Glycogen is a multibranched polysaccharide of glucose, whereby liver glycogen is involved in the regulation of blood glucose homeostasis. Under normal physiological conditions, glycogen is synthesized following ingestion and broken down during fasting periods. However, dysregulated glycogen metabolism is observed in the diabetic liver (5). Furthermore, other metabolic pathways display abnormalities to varying degrees as a result of T1D (6).

Mitochondria are the main organelles for substance and energy metabolism. Hepatic mitochondrial dysfunction serves an important role in excessive hepatic glucose production and impaired glucose utilization (7,8). Previous studies have demonstrated that niclosamide ethanolamine salt (NEN) and artemether (Art) displayed significant hypoglycemic effects in diabetes (9-12). Their pharmacological actions are closely related to the regulation of mitochondrial function (13,14). However, their combined therapeutic effects on the liver in T1D have remained elusive.

In the present study, the hepatoprotective effects of combined NEN and Art treatment in T1D mice and the potential underlying mechanisms were investigated.

A total of 60 male C57BL/6 mice (body weight, 22-26 g, ~8 weeks) were purchased from Guangdong Medical Laboratory Animal Center and were housed in the Central Animal Facility at Shenzhen Graduate School of Peking University (Shenzhen, China). The temperature was controlled at 20-23˚C, the relative humidity was controlled at 50-60%, the light and dark cycle was 12/12 h. All mice had free access to water and food. The diabetic mice were randomly allocated to the following groups (n=8 per group): T1D group (T1D), T1D+NEN group (NEN), T1D+Art group (Art) and T1D+NEN+Art group (NEN+Art). T1D was established by administering multiple intraperitoneal injections of streptozotocin (STZ; 55 mg/kg) to mice on five consecutive days. Control mice (n=8) were intraperitoneally injected with the same volume of the vehicle. Successful induction of T1D was confirmed according to fasting blood glucose levels of ≥11.1 mmol/l at 9 days after the last injection of STZ. Mice in the control and T1D groups were fed a conventional standard diet; Mice in the NEN group were fed a standard diet containing 10 g/kg NEN; mice in the Art group were fed a standard diet containing 0.67 g/kg Art; and mice in the NEN+Art group were fed a standard diet containing 10 g/kg NEN and 0.67 g/kg Art. The diet was freely available to each group mice in their cage. The doses of NEN and Art used in the present study were selected according to previous studies (9,12). The treatment lasted for 8 weeks. NEN was purchased from Hubei ShengTian HengChuang Biological Technology Co., Ltd. and Art was purchased from Chengdu ConBon Biotech Co., Ltd. All animal procedures were approved by the Guangzhou University of Chinese Medicine Institutional Animal Care and Use Committee (Shenzhen, China).

The body weight of the animals in each group was determined at the end of the study. The mice were anesthetized with ~1% isoflurane and euthanized by cervical dislocation. Blood samples and liver tissues were rapidly collected and the livers were weighed. Partial liver tissues were fixed in 10% formalin and used for histopathological examination and immunohistochemical staining. The remaining liver tissues were immediately snap-frozen in liquid nitrogen and stored at -80˚C for later analysis.

From each specimen, three to six liver sections were randomly selected and stained with periodic acid-Schiff (PAS) and diastase (D)-PAS (Beijing Solarbio Science & Technology Co., Ltd.) according to the manufacturer's protocols. The sections were scanned using the Digital Slide Scanner (3DHistech Ltd.) to evaluate the liver glycogen content.

Serum insulin levels were determined using an ELISA kit (EMD Millipore; cat. no. #EZRMI-13K) according to the manufacturer's protocol.

Compared with the control group, significantly increased fasting blood glucose, HbA1c and urinary glucose, and decreased serum insulin were observed in the T1D group mice (Fig. 1A-D). Consistent with a glycometabolic disorder, the mice in the T1D group exhibited typical diabetic symptoms including polydipsia, polyuria, polyphagia and increased feces production (Fig. 1E-H). These results confirmed that T1D in mice was well established and the success rate of establishing the model was ~85%. The combined treatment of NEN+Art reduced hyperglycemia and improved diabetic symptoms to a greater extent than treatment with NEN or Art alone.

Significantly increased liver weight and reduced liver glycogen were observed in the T1D group (Fig. 3A and B). NEN or Art treatment alone did not significantly increase the liver glycogen content. However, NEN+Art markedly increased the glycogen content (Fig. 3B). To further determine glycogen storage in the liver, PAS and D-PAS staining on liver sections was performed. The images demonstrated that glycogen changes in various groups were consistent with the biochemical measurement results (Fig. 3C and D).

Compared with the control group, TFAM protein expression levels increased significantly in the T1D group (Fig. 5A and B). Furthermore, mitochondrial-associated proteins, including VDAC, TOM20 and COX IV also increased to varying degrees (Fig. 5C-E). NEN and Art both exerted suppressive effects on mitochondrial biogenesis and these effects were significantly enhanced when the treatments were combined.

In the present study, it was demonstrated that a combined treatment approach with NEN and Art more effectively improved T1D symptoms and glycometabolism compared with either treatment administered separately. The therapeutic effects may be related to the regulation of hepatic glycogen metabolism and mitochondrial function.

Consistent with previous studies, NEN or Art treatment alone displayed a hypoglycemic effect; however, the two treatments do not necessarily use the same mechanism (9-12). The therapeutic effect was significantly enhanced in the NEN+Art combined treatment group. Considering that NEN and Art have different pharmacological actions (16,17), it may be hypothesized that their effect may be synergistic. Hepatic metabolic disorder is characteristic in patients with T1D. Changes in various liver injury biomarkers indicated that NEN treatment alone had a hepatoprotective effect. Although Art treatment alone did not reduce abnormally elevated serum levels of ALT and AST, the liver function improved with the combination of Art and NEN. These results indicated that NEN and Art may ameliorate liver injury via multiple signaling pathways.

Abnormal blood glucose and liver glycogen metabolism frequently occur simultaneously and restoration of one usually normalizes the other (18). Consistent with previous findings (19), a lower liver glycogen content was detected in the T1D mice. G6Pase is responsible for completing the final step in gluconeogenesis, which hydrolyzes glucose-6-phosphate to glucose in the endoplasmic reticulum (20,21). In the present study, significantly increased hepatic G6Pase protein expression levels were observed in T1D mice. Taken together, these results suggested that augmented hepatic gluconeogenesis may contribute to impaired blood glucose and liver glycogen metabolism. The increased G6Pase protein expression levels were significantly reduced by NEN and Art alone or together to various degrees. A combination of NEN and Art also increased liver glycogen storage.

Mitochondria are the prime metabolic platform for various factors involved in energy metabolism (22). TFAM is a transcription factor that activates mitochondrial biogenesis (23). VDAC, COX IV and TOM20 are the main structural components of the mitochondria. In the present study, all these aforementioned mitochondria-related proteins were indicated to be significantly upregulated in T1D mice, which demonstrated that the hepatic mitochondrial content was increased under T1D conditions. PCK2 and BCKDH are metabolic enzymes located in the mitochondrial matrix that are associated with gluconeogenesis (24-26). Their upregulated protein expression levels in the diabetic liver in the present study suggested that the mitochondria were working harder to promote gluconeogenesis. Furthermore, the hepatic protein expression level of PDH (the key enzyme regulating pyruvate oxidation) did not increase with diabetic liver mitochondria accumulation. The RER is an important indicator to evaluate the utilization ratio of metabolic substrates (10). Diabetic T1D mice exhibited a reduced RER during both the dark and light phases of their daily cycles when compared with the control mice. The declining trend was more prominent during the dark phase. Taken together, these results indicated that mitochondrial pyruvate aerobic oxidation is relatively weakened and this is consistent with the reduction in the RER. NEN and Art ameliorated the pathological alterations of mitochondria and increased RER to various degrees. These results demonstrated that NEN and Art were able to increase the aerobic oxidation of glucose and recover the impaired mitochondrial glucose metabolism. More importantly, the effects were significantly enhanced by the combined treatment. However, the detailed mechanisms underlying the influences of NEN and Art on the RER require further investigation.

In conclusion, the present study demonstrated that combined treatment with NEN and Art improved glycometabolism and liver function more effectively than NEN or Art treatment alone in T1D mice. The underlying mechanisms may be associated with hepatic glycogen and mitochondrial metabolism. Combination therapy may be a promising approach for treating T1D in the future.

Funding: This study was supported by grants from the National Natural Science Foundation of China (grant nos. 82004156 and 81673794), Shenzhen Science and Technology Project (grant no. JCYJ20190812183603627) and Shenzhen Fund for Guangdong Provincial High-level Clinical Key Specialties.

The animal experiments in this study were approved by the Guangzhou University of Chinese Medicine Institutional Animal Care and Use Committee (Shenzhen, China). 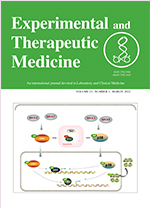