Lung cancer ranks among the top malignancies in terms of morbidity and mortality globally, accounting for 11.4% of all cancer cases and 18% of all cancer-associated deaths (1). Lung cancer includes non-small cell lung cancer (NSCLC) and SCLC. Among the different types of NSCLC, including adenocarcinoma and squamous and large cell carcinoma, adenocarcinoma is the most common type (2). Lung adenocarcinoma (LUAD) is prone to bone metastasis and patients with bone metastasis have been shown to have poor prognosis. Additionally, the pain and bone breakage caused by bone metastasis decreases quality of life of patients (3). Molecular-targeted therapy and immunotherapy have been widely used in clinical practice as a supplement to traditional surgery and chemoradiotherapy; however, the 5-year survival rate of patients is still not ideal and more effective therapies need to be found (4,5). Therefore, it is of clinical significance to study the pathogenesis of LUAD metastasis and find effective treatments.

Deoxyribonuclease 1-like 3 (DNASE1L3) is a member of DNASE1 gene family and serves a key role in DNA degradation during cell death and apoptosis (6,7). DNASE1L3 has been shown to be involved in signal transduction in breast cancer, exhibiting intracellular signal cascade receptor activity and serving as a GTPase regulatory factor (8). DNASE1L3 has also been shown to suppress apoptosis and reprogram glucose metabolism, thus inhibiting hepatocellular carcinoma (HCC) progression (9). The senescence-associated secretory phenotypes are damaged by DNASE1L3 interacted with H2BE to suppress tumor angiogenesis in HCC (10). Underexpression of DNASE1L3 in colon cancer samples is a potential prognostic biomarker associated with immune invasion of colon cancer and overexpression of DNASE1L3 inhibits cell proliferation and motility (11). A previous study reported that DNASE1L3 is downregulated in LUAD (12). An additional study found that mRNA and protein expression levels of DNASE1L3 in patients with LUAD are significantly lower than those in normal tissue and low expression of DNASE1L3 is significantly correlated with higher pathological stage, T stage and poor prognosis, making it an independent factor for predicting the overall survival rate (13). The specific role of DNASE1L3 in LUAD, to the best of our knowledge, has not yet been reported.

Previous studies have shown that transcription factor forkhead-box P2 (FOXP2) is involved in the regulation of tumor invasion and metastasis (14-17). FOXP2 protein has been shown to promote cell proliferation, invasion and metastasis in breast cancer (14). FOXP2 has also been shown to activate TGF-β to promote migration and invasion of prostate cancer cells (15). Upregulated FOXP2 expression inhibits proliferation, migration, invasion and epithelial-mesenchymal transformation (EMT) and promotes cell apoptosis in NSCLC (16,17). All these findings imply that FOXP2 may function in opposing ways in different tissues.

Therefore, it was hypothesized that as DNASE1L3 is underexpressed in LUAD, overexpression of DNASE1L3 may inhibit malignant progression of LUAD. In addition, DNASE1L3 transcription may be positively regulated by FOXP2.

The expression of DNASE1L3 and FOXP2 in LUAD cells or transfected LUAD cells was detected by RT-qPCR. A549 cells were collected and total RNA was extracted using TRIzol® reagent (Invitrogen; Thermo Fisher Scientific, Inc.). Next, total RNA was reverse-transcribed into cDNA using a PrimeScript™ RT reagent kit (Takara Bio, Inc.) according to the manufacturer's protocol and qPCR was conducted with SYBR-Green PCR Master Mix (MedChemExpress). The following thermocycling conditions were used: Initial denaturation at 94˚C for 5 min, 36 cycles at 94˚C for 20 sec, 54˚C for 20 sec and 72˚C for 20 sec. The primer sequences were as follows: DNASE1L3, forward, 5'-AGCCCTTTGTGGTCTGGTTC-3' and reverse, 5'-TCCTTAACGGATGTCTCTGGG-3'; FOXP2 forward, 5'-AATCTGCGACAGAGACAATAAGC-3' and reverse, 5'-TCCACTTGTTTGCTGCTGTAAA-3' and GAPDH forward, 5'-GGAGCGAGATCCCTCCAAAAT-3' and reverse, 5'-GGCTGTTGTCATACTTCTCATGG-3'. Relative expression of DNASE1L3 and FOXP2 was quantified using the 2-ΔΔCq method (20) and GAPDH served as the internal control.

The viability of transfected LUAD cells was analyzed by MTT assay. Transfected A549 cells (5x103/well) were seeded into 96-well plates and incubated at 37˚C with 5% CO2 for 24, 48 and 72 h. Following incubation, 10 µl MTT (5 mg/ml; Sigma-Aldrich; Merck KGaA) was added to cells in each well, then incubated for 4 h at 37˚C. The supernatant was discarded and 100 µl DMSO was added to each well before plates were shaken at low speed for 10 min. The absorbance values at 490 nm were measured using a microplate reader.

EdU staining was used to determine proliferation of the transfected LUAD cells. The proliferation of A549 cells was determined using the Cell-Light EdU Apollo488 In Vitro Kit (cat. no. C10310-3; Guangzhou Ribobio Co., Ltd.). Briefly, A549 cells were incubated with EdU solution for 2 h at 37˚C and fixed with PBS containing 4% paraformaldehyde at room temperature for 15 min. Subsequently, the nucleus was stained with 0.01 mg/ml DAPI at 37˚C for 30 min. Finally, five areas were randomly selected at x200 magnification to count the number of green fluorescence-positive cells under a fluorescence microscope (Olympus Corporation) using ImageJ (version no. 1.52; National Institutes of Health).

The migration of transfected LUAD cells was detected by wound healing assay. Following transfection, A549 cells were seeded into a six-well plate (3x105 cells/well) in RPMI-1640 medium and grown to 90% confluence at 37˚C. A 100-µl pipette tip was used to scratch a straight wound across the well and incubated at 37˚C in serum-free medium. After 24 h, images of the migrated cells were captured using a light microscope (Olympus Corporation) at x100 magnification and scratch widths were recorded by ImageJ 1.8.0 software (National Institutes of Health). Multiple measurements were made along the scratch (n=3).

The invasion of transfected LUAD cells was detected by Transwell assay. A549 cells were inoculated into 24-well invasion chambers (1x105 cells/well). The upper chamber was coated with Matrigel (8 µm pores) at 37˚C for 30 min. The lower chamber contained RPMI-1640 medium supplemented with 10% FBS as the chemoattractant. After incubation for 24 h at 37˚C, the non-invasive cells inside the upper chamber were removed and the remaining cells were fixed with 4% paraformaldehyde for 15 min at room temperature and stained with 1% Giemsa for 5 min at room temperature. The invasive cells were observed by a light microscope (Olympus Corporation) at x100 magnification and the number of invasive cells was counted by a cell counter.

Dual-luciferase reporter assay was performed to verify whether transcription factor FOXP2 interacted with the DNASE1L3 promoter. The wild-type (DNASE1L3-WT) or mutant (DNASE1L3-MUT) fragments of DNASE1L3 (accession no. NM_001256560.2) with the binding site of FOXP2 were constructed by Shanghai GenePharma Co., Ltd. WT or MUT sequence were cloned into the pGL3 luciferase reporter vector (Promega Corporation). A549 cells (5x105) were seeded in 24-well plates for 24 h at 37˚C and co-transfected with WT or MT plasmid and Oe-NC or Oe-FOXP2 using Lipofectamine® 2000 (Invitrogen; Thermo Fisher Scientific, Inc.). After 48 h at 37˚C, the luciferase activity was detected using dual luciferase reporter assay kit (cat. no. E1910; Promega Corporation). Renilla luciferase activity was used for normalization.

ChIP analysis was performed to confirm whether transcription factor FOXP2 bound to the DNASE1L3 promoter. ChIP analysis was carried out using ChIP Assay kit (Beyotime Institute of Biotechnology) according to manufacturer's protocol. Briefly, 1% formaldehyde was added to transfected A549 cells for 10 min at room temperature. The fixed cells were washed twice with phosphate-buffered saline and were lysed using a lysis buffer (0.1% SDS, 0.5% Triton X-100, 20 mM Tris-HCl, pH 8.1) that contained 150 mM NaCl and a protease inhibitor, after which chromatin fragments were obtained using sonication using a 10 sec on and 10 sec off mode for 12 cycles at 4˚C. Samples were centrifuged at 13,000 x g for 10 min at 4˚C, and 100 µl of supernatant was pre-absorbed by 2 µg of anti-FOXP2 antibody (cat. no. #5337; 1/200; Cell Signaling Technology) or IgG control (cat. no. ab172730; 1:50; Abcam) overnight at 4˚C. Samples were supplemented with protein agarose/sepharose (cat. no. #9863; Cell Signaling Technology) to precipitate the endogenous DNA-protein complex. The immunoprecipitated complex was centrifuged (5,000 x g for 1 min at 4˚C) and washed with low salt, high salt, LiCl and TE buffers in the kit according to the manufacturer's protocols. The complex was eluted from the antibody using a solution of 1% SDS, 0.1 mol/l NaHCO3 and 200 mmol/l NaCl. The complex was de-crosslinked at 65˚C and the DNA fragment was recovered by phenol/chloroform extraction and purification. The enrichment of specific fragments was determined by RT-qPCR, as aforementioned.

Data from three independent replicates are presented as the mean ± SD. GraphPad Prism 8.0.1 (GraphPad Software, Inc.) was used for the statistical analysis. Overall survival was calculated by Kaplan-Meier survival analysis. An unpaired Student's t test was applied for the comparison between two groups. Comparisons between >2 groups were made using one-way ANOVA followed by Tukey's post hoc test. P<0.05 was considered to indicate a statistically significant difference.

DNASE1L3 underexpression in LUAD is associated with poor prognosis

Oe-DNASE1L3 inhibits proliferation of A549 cells

Oe-DNASE1L3 inhibits migration, invasion and tube formation of A549 cells

Transcription factor FOXP2 regulates transcription of DNASE1L3 and promotes the migration, invasion and tube formation of A549 cells

LUAD, the most common type of lung cancer, grows and migrates faster than other subtypes and most patients are already in the middle and advanced stage when treated (21). The proliferation, invasion and migration of lung cancer cells are often accompanied by EMT progression (22,23). EMT describes epithelial cells that have morphologically transformed into mesenchymal cells and acquired migration ability, which serves a key role in the process of embryonic growth, tissue remodeling and tumor metastasis (24,25). EMT is a key process in lung cancer cell migration, during which the cytoplasmic skeleton is rebuilt and connectivity between cells is weakened, thus promoting cell migration (26). VEGFα is a highly specific regulatory factor that induces tumor angiogenesis and promotes migration of vascular endothelial cells by increasing mitosis of blood tubules. Remodeling of extracellular matrix and increased vascular permeability are associated with occurrence, development and metastasis of lung cancer (27,28). DNASE1L3 suppresses tumor angiogenesis in HCC and overexpression of DNASE1L3 inhibits proliferation and motility of colon cancer cells (9,10). The present study showed that Oe-DNASE1L3 inhibited proliferation, invasion, migration and tube formation of A549 cells by suppressing EMT progression and VEGF expression.

In conclusion, the present study illustrated the role of DNASE1L3 in LUAD and showed that DNASE1L3 was positively regulated by transcription factor FOXP2, which in turn inhibited proliferation, migration, invasion and tube formation of LUAD cells. The present study is limited by the use of only the A549 cell line; other cell lines and in vivo models should be assessed to confirm the results in future research.

Funding: The present study was supported by Tianjin Education Bureau (grant no. 2020KJ161).

Availability of data and material 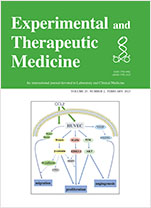