Astragalus polysaccharide (APS) has been reported to increase insulin sensitization and to ameliorate diabetes in animal models, and studies have demonstrated that this effect may be correlated with its anti-inflammatory roles in vivo and in vitro. However, the potential pharmacological mechanisms of APS in anti-inflammatory regulation are still poorly understood. Herein, RAW264.7 cells treated with APS showed anti-inflammatory effects. Interleukin (IL)-10 protein levels and expression of most of the anti-inflammatory genes, including IL-10, macrophage mannose receptor (MMR), arginase, Dectin-1, YM-1 and YM-2, were significantly increased after treatment with APS for 24 h. Furthermore, to determine whether APS plays a potential role in RAW264.7 cell inflammation, we pretreated RAW264.7 cells with APS in the presence of palmitate. The results showed that APS markedly recovered the impairment of AMPK activity induced by palmitate. Furthermore, APS induced IL-10 protein production and anti-inflammatory gene expression of IL-10, MMR, Dectin-1, arginase, YM-1 and YM-2. Additionally, APS inhibited IL-1β protein production and expression of most of the pro-inflammatory genes, such as IL-1β, iNOS, MCP-1, IL-6 and CD11c but not tumor necrosis factor (TNF)-α. Notably, the effect of APS on inflammatory genes, except for TNF-α, was abrogated when AMPK activity was inhibited using a DN-AMPK plasmid. These results suggest that APS effectively ameliorates palmitate-induced pro-inflammatory responses through AMPK activity.

Astragalus membranaceus (Fisch.) Bunge var. mongholicus (Bunge) Hsiao was purchased from Shanghai Medicinal Materials Co. (Shanghai, China). We extracted the main bioactive component, Astragalus polysaccharide (APS), with optimized techniques using direct water decoction according to a previously described procedure with some modifications (18). In brief, APS, a hazel-colored and water-soluble powder, was diluted in DMEM (SH30022.1B; HyClone) to a working concentration of 10%. This solution was filtered three times with a 0.22-μm filter before use. All APS dilutions were limited to a one-time use. The extract was identified by the Department of Authentication of Chinese Medicine, Hubei College of Chinese Traditional Medicine (Wuhan, China). The endotoxin contaminants in the APS working solution was tested and limited to <0.05 EU/ml.

BSA-bound palmitate was constructed according to a previously described procedure with some modifications (19). In brief, palmitate was dissolved in ethanol to a concentration of 0.75 M, and then diluted with 20% FFA-free BSA to a working concentration of 7.5 mM (the molar ratio of palmitate to BSA was ∼2.5). This stock solution was filtered and stored at −20°C to be used within two weeks. The same concentration of ethanol mixed with 20% of BSA was used as a control. The endotoxin contaminants in the palmitate working solution was tested and limited to <0.3 EU/ml. This amount of contaminating endotoxin was previously proven not to be sufficient to activate RAW264.7 cells (5).

The murine macrophage cell line RAW264.7 was purchased from the Shanghai Cellular Research Institute (China) and cultured in DMEM supplemented with 10% fetal bovine serum (SV30087; HyClone), 100 U/ml penicillin and 100 μg/ml streptomycin at 37°C in a humidified atmosphere of 5% CO2. The cells were trypsinized at 80% confluence with 0.25% trypsin/0.02% EDTA in Hank’s solution for 1–3 min and resuspended in a complete culture medium. These culture materials were all endotoxin-free.

Total RNA obtained from murine RAW264.7 macrophages in 6-well plates (1×106 cells/plate) was prepared with RNeasy® Mini kit columns (Qiagen) using the manufacturer’s protocol. cDNA synthesis was performed with 1 μg of total RNA using hexamers for priming and the QuantiTect® Reverse Transcription kit (Qiagen) according to the manufacturer’s recommendations. Quantitative real-time PCR was performed on a LightCycler system (Bio-Rad iQ-2; Bio-Rad) using QuantiFast™ SYBR®-Green PCR (Genocopy). Ten microliters of reaction mixture was incubated, and amplification was performed for 50 cycles (30 sec at 95°C and 30 sec at 60°C). The primers (at a final concentration of 10 mM) were designed with the Primer 5 software (Table I). The β-actin mRNA level was used as the internal control. All samples were run in triplicates. The qRT-PCR results were analyzed as previously described (20).

Primer sequences used in this study.

The RAW264.7 cells in 6-well plates (1×106 cells/plate) were incubated with APS. Supernatants were recovered and frozen at −80°C before analysis. The production of IL-10 and IL-1β in cell supernatants was determined with an ELISA kit (R&D Systems, USA) according to the manufacturer’s instructions.

DN-AMPKα1 (dominant negative) and the control vector, pcDNA-Zeo, were gifts from Professor Carling Dave (Imperial College, London, UK). The plasmids were transfected into RAW264.7 cells using Lipofectamine™ 2000 (Invitrogen) according to the manufacturer’s protocol. All plasmids used here were removed from endotoxin, and the amount of contaminating lipopolysaccharide was tested to be <0.01 EU/ml.

Data are expressed as the means ± standard deviation (SD). Data were analyzed with SPSS 17.0 software and tested by one-way analysis of variance (ANOVA). P<0.05 was defined as indicating a statistically significant result.

APS modulates the expression of inflammatory genes in RAW264.7 cells

To further ascertain whether APS-regulated IL-10 and IL-1β expression is dependent on AMPK activity, RAW264.7 cells were transfected with DN-AMPKα to inhibit AMPK activity (Fig. 4A and C). Compared with the pcDNA-Zeo control group, DN-AMPK groups treated for 24 h with 200 and 400 μg/ml of APS showed significant decreases in IL-10 mRNA by 39±10 and 63±6%, respectively. IL-10 protein secretion in the DN-AMPK groups was abrogated by 39±5% with 200 μg/ml APS treatment and by 57±3% with 400 μg/ml APS treatment (Fig. 4B). Furthermore, DN-AMPK macrophages were pretreated with 400 μg/ml APS for 24 h and treated again with palmitate for 12 h. APS-dependent recovery of IL-10 mRNA in the presence of palmitate (0.5 mM) was inhibited by AMPK impairment by 55±13%. AMPK impairment also inhibited the recovery of IL-10 protein production by 73±2% (Fig. 4D). Meanwhile, APS-dependent inhibition of IL-1β mRNA and protein in the presence of palmitate (0.5 mM) was abrogated by AMPK impairment (Fig. 4D). Consistently, compound C, an AMPK inhibitor, also abrogated the APS-dependent IL-10 recovery and IL-1β inhibition in the presence of palmitate (0.5 mM) (Fig. 4E). These results demonstrate that the enhancement of IL-10 and suppression of IL-1β in RAW264.7 cells following palmitate treatment was caused by APS and was dependent on AMPK activity.

AMPK was demonstrated to be a good cellular regulator for insulin resistance and diabetes in metabolic disorders (25). Recent evidence revealed that AMPK is also involved in regulating inflammatory responses (6,13,26). We found that APS stimulates RAW264.7 cells to an anti-inflammatory polarization. However, whether APS stimulates AMPK activity in RAW264.7 cells is still unknown. Phosphorylation of the α subunit at the site of Thr172 residue is crucial for AMPK activity (25). In the present study, RAW264.7 cells were treated with APS for the indicated time periods or treated with various APS concentrations for the same time. Results showed that APS rapidly increased phosphorylation of AMPK (Thr172) in a dose-dependent manner (Fig. 3A and B). Furthermore, APS recovered the impaired AMPK phosphorylation induced by palmitate (Fig. 3C). Therefore, we demonstrated that APS stimulates AMPK activity in RAW264.7 cells with or without palmitate treatment. 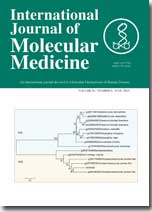