The human prion protein (PrP) fragment PrP(106‑126) possesses the majority of the pathogenic properties associated with the infectious scrapie isoform of PrP, known as PrPSc. The accumulation of PrPSc in the brain of humans and animals affects the central nervous system. Recent epidemiological studies have suggested that caffeine, one of the major components of coffee, exerts protective effects against the development of neurodegeneration. However, the protective effects of caffeine against prion disease have not been reported to date. In this study, we therefore investigated the effects of caffeine on PrP-mediated neurotoxicity. The protein expression of the autophagosomal marker, LC3-II, was increased by caffeine in a dose-dependent manner, and the autophagy induced by caffeine protected the neuronal cells against PrP(106‑126)‑induced cell death. On the contrary, the downregulation of LC3-II using the autophagy inhibitors, 3-methyladenine (3-ΜΑ) and wortmannin, prevented the caffeine-mediated neuroprotective effects. To the best of our knowledge, the present study provides the first evidence that treatment with caffeine protects human neuronal cells against prion‑mediated neurotoxicity and these neuroprotective effects are mediated by caffeine-induced autophagy signals. Our data suggest that treatment with caffeine may be a novel therapeutic strategy for prion peptide‑induced apoptosis.

The misfolding and aggregation of specific proteins is a common hallmark of a number of neurodegenerative disorders, including highly prevalent illnesses, such as Alzheimer’s and Parkinson’s disease, as well as more rare disorders, such as prion diseases (1). Prion diseases, also known as transmissible spongiform encephalopathies (TSEs), are a group of fatal neurodegenerative disorders caused by the misfolding of normal cellular prion (PrPC) into an abnormal form of scrapie isoform of prion protein (PrPSc) (2). The basic mechanism of prion infectivity is the ability to self-reproduce through the conversion of PrPC into PrPSc, a transformed protease-resistant protein that is believed to be the infectious agent in the transmissible form of prion disease (3). Although it is well established that PrPSc plays a major role in the origin and transmission of TSEs, the mechanisms through which the disease-specific PrP exerts its harmful effects on neurons remain unknown (4).

PrP(106-126), a peptide fragment of PrPSc, was used in this study for the experimental induction of PrPSc infection. PrP(106-126) possesses several of the pathogenic and physiological properties of PrPSc, including the ability to induce apoptosis in hippocampal neurons and to induce the proliferation of astrocytes (5). It also catalyzes the aggregation of endogenous cellular PrP (PrPC) into an amyloidogenic form that shares several characteristics with PrPSc (6). Therefore, this peptide is useful for in vitro studies of prion-induced neuronal apoptosis.

The term ‘autophagy’, which means ‘eating of self’, was first coined by Deter and De Duve several decades ago and was primarily based on the observed degradation of the mitochondria and cellular components within lysosomes (7). Autophagy encompasses the different routes that cells use to deliver cytoplasmic substrates to lysosomes for degradation (8). There are three defined types of autophagy: macroautophagy, microautophagy and chaperone-mediated autophagy (CMA), all of which promote the proteolytic degradation of the intracellular components at the lysosome (9). In the present study, we focused on macroautophagy. Upon induction, the phagophore expands and encloses a portion of the cytoplasm, resulting in the formation of a double-membraned structure termed the autophagosome, which fuses with a lysosome for degradation (10). Autophagy, a common morphological feature in dying cells, was often erroneously presumed to be a cell death pathway. However, it now seems clear that one of its major functions is to keep cells alive under stressful ‘life-threatening’ conditions (11). The suppression of autophagy is associated with certain diseases, including a subset of cancers, neurodegenerative disorders, infectious diseases and inflammatory bowel disorders, and a decline in autophagy function is a common feature of aging (10). The neuroprotective effects mediated by the inducers of autophagy are related to an increase in the mitochondrial turnover as a result of autophagy activation (12,13). In addition, autophagy reduces the amount of abnormal PrP (14).

Caffeine is a widely used psychoactive drug that has been long used to increase alertness and energy. It is also known to exert neuroprotective effects against Parkinson’s disease, one of the many neurodegenerative disorders (15). However, little is known about the effects of caffeine on autophagy and cellular homeostasis in prion diseases.

In this study, we investigated the protective effects of caffeine against the neurotoxicity that is associated with prions using the PrP(106-126) peptide in a SH-SY5Y neuroblastoma cell line. Our results demonstrate that caffeine enhances autophagy in a dose-dependent manner in neuroblastoma cells. Furthermore, we reveal that caffeine-induced autophagy protects these cells against PrP(106-126)-induced apoptosis.

The human neuroblastoma cell line, SH-SY5Y, was obtained from the American Type Culture Collection (ATCC; Rockville, MD, USA). The cells were cultured in minimum essential medium (Invitrogen-Gibco, Carlsbad, CA, USA) supplemented with 10% fetal bovine serum (Invitrogen-Gibco), 100 U/ml penicillin and 0.1 mg/ml gentamycin in a humidified incubator maintained at 37°C and 5% CO2. The cells were treated with various doses of caffeine (Sigma-Aldrich, St. Louis, MO, USA) for 1 h and were then exposed to 50 μM PrP(106-126) for 24 h with or without the autophagy inhibitors, 3-methyladenine (3-MA; 200 μM) and wortmannin (50 nM) (Sigma-Aldrich).

Synthetic PrP(106-126) peptides (sequence, Lys-Thr-Asn-Met-Lys-His-Met-Ala-Gly-Ala-Ala-Ala-Ala-Gly-Ala-Val-Val-Gly-Gly-Leu-Gly) were synthesized by Peptron (Seoul, Korea). The peptides were dissolved in sterile dimethyl sulfoxide at a stock concentration of 10 mM and stored at −4°C.

TUNEL assay was performed to measure the degree of cellular apoptosis using an In Situ ApoBrdU DNA fragmentation assay kit (BioVision, Mountain View, CA, USA), according to the manufacturer’s instructions. The cells were counterstained with propidium iodide (PI) to show cell nuclei.

Apoptosis in the detached cells was assessed using an Annexin V assay kit (Santa Cruz Biotechnology, Santa Cruz, CA, USA) according to the manufacturer’s instructions. The Annexin V levels were determined by measuring fluorescence at an excitation of 488 nm and an emission of 525/30 using a Guava EasyCyte HT System (Millipore, Bedford, MA, USA).

The number of viable cells was determined by trypan blue dye exclusion (Sigma-Aldrich) using a hemocytometer. The result was expressed as a percentage relative to the control.

We examined whether caffeine protects neuronal cells against prion-mediated neurotoxicity and whether these effects are associated with the induction of autophagy. First, we investigated the effects of caffeine on PrP(106-126)-mediated neurotoxicity in the SH-SY5Y cells using an Annexin V assay. The SH-SY5Y cells were exposed to caffeine with or without PrP(106-126). The cell viability of the PrP(106-126)-treated cells was decreased by approximately 50% compared with the untreated controls. The cell viability of the cells treated with caffeine only was comparable to that of the untreated controls. Importantly, treatment with caffeine inhibited PrP(106-126)-induced neurotoxicity in the SH-SY5Y cells (Fig. 1A and B). We also used a TUNEL assay (Fig. 1C), microscopic imaging (Fig. 1D) and a trypan blue exclusion assay (Fig. 1E). As shown in Fig. 1C, the apoptotic process in the PrP(106-126)-treated cells emitted green fluorescence, indicating DNA strand breakage. As shown in Fig. 1E, treatment with caffeine reversed the cell death induced by treatment with PrP(106-126) in a dose-dependent manner. These results indicated that caffeine was effective in preventing PrP(106-126)-induced apoptosis in the SH-SY5Y cells.

Caffeine induces the production of the autophagosomal marker, LC3-II

The LC3 protein is localized and aggregated on the autophagosome and is therefore considered to be a marker for autophagy. LC3 transforms from LC3-I into LC3-II during autophagosome formation (16). Thus, in the present study, we investigated whether caffeine induces autophagy by measuring LC3 transformation. As shown in Fig. 2, we found that the levels of the late autophagosomal marker, LC3-II, increased in the caffeine-treated group in a dose-dependent manner compared with the control, as shown by western blot and densitometric analyses (Fig. 2A and B). These results suggested that caffeine induced autophagy in a dose-dependent manner.

Accumulating evidence suggests a neuroprotective role of autophagy in the control of cell death (17–19). In this study, to investigate the effects of caffeine on the activation of autophagy, we analyzed the levels of LC3-II and cell viability using autophagy inhibitors. We found that the caffeine-induced increase in the LC3-II levels was inhibited by the autophagy inhibitors, 3-MA and wortmannin, as shown by western blot and densitometryic analyses (Fig. 3A and B). We also found that the effects of caffeine on cell viability were reversed by treatment with 3-MA and wortmannin, as shown by an Annexin-V assay and graph analysis (Fig. 3C and D). In Fig. 3C, which shows the results procuced by the Annexin V assay, the dots represent fluorescent cells in the plot. Green fluorescence (x-axis) indicates apoptosis and red fluorescence (y-axis) indicates necrosis. Cells in the first quadrant signify the late apoptotic condition and cells in the fourth quadrant signify the early apoptotic condition. We found that recovery in cell viability induced by caffeine was reversed by treatment with 3-MA and wortmannin. These results strongly suggest that caffeine exerts neuroprotective effects through the induction of autophagy.

Effects of caffeine on Akt and JNK signaling

The aim of this study was to investigate the role of caffeine-induced autophagy and the regulation of PrP(106-126)-induced apoptosis by caffeine in neuronal cells. Our results suggest that the increase in autophagy induced by caffeine and the resultant reduction in PrP(106-126)-induced neurotoxicity may be the key mechanisms underlying the observed neuroprotective effects of caffeine.

Caffeine is widely used in modern society and is classified as safe by the food and drug administration. Beverages containing caffeine, such as coffee, tea, soft drinks and energy drinks, enjoy great popularity. Caffeine is a psychoactive drug and functions as a central nervous system stimulant, temporarily relieving drowsiness and restoring alertness. A recent study suggested that caffeine induces neuronal GSH synthesis by promoting cysteine uptake, thus leading to neuroprotection (22). Caffeine has also been shown to exert protective effects against Alzheimer’s and Parkinson’s disease in human and animal studies (23).

Certain studies have suggested that caffeine induces autophagy (24,25). Several other studies have suggested that autophagy is a double-edged sword, with both a beneficial and a harmful potential in cancer (26) and neurodegeneration (27). On the positive side, autophagy is the cellular pathway that mediates the lysosomal degradation of intracellular long-lived macromolecules or organelles for subsequent reuse under physiological conditions of differentiation, starvation, or stress, such as oxidative stress, endoplasmic reticulum stress and the accumulation of abnormal protein (9,28). Saiki et al reported that caffeine at concentrations >2.5 mM induced apoptosis through the enhancement of autophagy and that the levels of LC3-II were markedly increased at concentrations >10 mM (25). However, in this study, 8 mM caffeine did not decrease cell viability compared with the control, although it clearly increased the levels of the autophagosomal marker, LC3-II. We also found that caffeine induced apoptosis at concentrations >10 mM (data not shown). We suggest that the caffeine used in the study by Saiki et al (25) was slightly different from the one we used, with respect to certain characteristics, such as purity or grade. Based on our findings, we suggest that caffeine exerts neuroprotective effects through the induction of autophagy.

Certain studies have shown that caffeine inhibits the PI3K/Akt pathway (29,30). By contrast, our experimental data indicated that Akt activation was increased by treatment with caffeine. Nakaso et al also suggested that caffeine activated the PI3K/Akt pathway in SH-SY5Y cells (20). As shown in Fig. 4A and C, the activation of JNK by PrP (106-12) was decreased by treatment with caffeine. This indicates that caffeine suppresses apoptosis-related signaling in neuronal cells, as JNK is closely associated with apoptosis in neurons (31). These findings support our hypothesis that caffeine exerts protective effects against PrP(106-126)-induced apoptosis in SH-SY5Y cells.

The cross-talk between apoptosis and autophagy is complex and sometimes contradictory; however, it is a critical determinant of the overall fate of the cell. To the best of our knowledge, this is the first study indicating that caffeine-mediated autophagy may play a critical role in the neuroprotection against PrP(106-126)-induced neurotoxicity. We therefore suggest that caffeine may be a valid therapeutic agent for prion-related neurodegenerative diseases.

This study was supported by a grant from the National Research Foundation of Korea (NRF), funded by the Korean government (MISP) (2013R1A4A1069486). 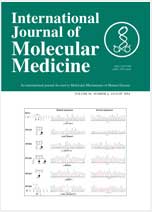