Ornithine decarboxylase antizyme 1 (OAZ1) is an antizyme targeting ornithine decarboxylase for degradation, subsequently inhibiting polyamine production to prevent cell proliferation. OAZ1 is also involved in other major cellular events, including differentiation and apoptosis. Recent studies have shown that OAZ1 has tumor suppressor activities and its effects on cell proliferation and differentiation have been reported in several cancer cell lines. To explore the role of OAZ1 in human oral cancer, the effects of OAZ1 were studied on the proliferation and differentiation of human malignant oral cancer cell line, SCC15. MTT assay and flow cytometry analysis showed that stable OAZ1 expression in SCC15 significantly inhibited cell proliferation (P<0.001) and induced G0/G1 arrest with the G1‑phase cells increased from 55.83 to 65.26%. Morphological observation revealed the increased formation of epithelial islands. Further results from quantitative reverse transcription‑polymerase chain reaction and western blot analysis proved the upregulation of several terminal differentiation marker genes (K10, FLG and LOR) in OAZ1‑expressed SCC15 cells. To elucidate the possible mechanism of LOR upregulation by OAZ1, further experiments were performed and it was found that the OAZ1 expression inhibited Smad nuclear interacting protein 1 (SNIP1) at the protein level and RNA interference of SNIP1 in SCC15 cells, which increased the expression of LOR. These results show that OAZ1 simultaneously inhibits the proliferation and induces the differentiation of oral cancer cells in humans. The effects on cellular differentiation depend partly on the degradation of SNIP1.

Ornithine decarboxylase antizyme 1 (OAZ1) is a member of the ornithine decarboxylase (ODC) antizyme family, which targets ODC for ubiquitin-independent proteasome degradation, thereby inhibiting the synthesis of polyamines and cell proliferation (1). OAZ1 can also inhibit cell growth through ODC-independent mechanisms, including the inhibition of cellular uptake of polyamines by inactivating the polyamine uptake transporter, promoting cyclin D1 degradation and preventing ubiquitin-independent msp1 degradation (2–5). Studies of cancer have also proved that OAZ1 has tumor suppressor activities and it can affect the apoptosis and proliferation of multiple tumor cell lines (6–8).

Several investigators have studied the involvement of OAZ1 in tongue squamous cell carcinoma (TSCC). In p53-knockout mice, overexpression of the OAZ1 protein inhibited the production of keratinocyte proliferation marker, keratin 6 (K6), whereas it upregulated the expression of keratinocyte differentiation marker, loricrin (LOR) (9). In hamster malignant oral keratinocytes, ectopic expression of OAZ1 induced epithelial differentiation with the overexpression of involucrin (IVL) (10). In several human oral cancer cell lines, the expression level of the OAZ1 gene was downregulated (11,12). A previous study has shown that OAZ1 induces the conversion of the human tongue squamous cancer cell line, UM1, to the less metastatic type, UM2, with the hypomethylation of genome DNA and histone H3 lysine 9 dimethylation (12). However, the overall effects of OAZ1 on cellular proliferation and differentiation in human oral cancer cells and the underlying mechanism remain to be studied.

In the present study, the lentiviral vector containing the OAZ1 gene was constructed and transfected into the human tongue cancer cell line, SCC15, to evaluate the effects of OAZ1 expression on proliferation and differentiation of the cells. The results showed that the stable expression of OAZ1 in SCC15 inhibited the cell proliferation rate and induced G0/G1 arrest. OAZ1 expression also induced the formation of epithelial islands with elevation of several differentiation marker genes (K10, FLG and LOR). OAZ1 was also found to inhibit Smad nuclear interacting protein 1 (SNIP1) and silencing of SNIP1 increased the expression of LOR in SCC15 cells. The results of the study proved that OAZ1 can simultaneously inhibit proliferation and induce differentiation of oral cancer cells in humans.

The human oral cancer cell line, SCC15, was obtained from the American Type Culture Collection (ATCC, Manassas, VA, USA) and maintained in Dulbecco’s modified Eagles medium/F12 medium supplemented with 10% (v/v) fetal bovine serum at 37°C in 5% CO2. The lentiviral vector (pLVX-Neo-IRES-ZsGreen) containing the green fluorescent protein (GFP) gene, ZsGreen, was ligated to OAZ1 cDNA (loss of the frameshift site) to construct the stable expression vector of OAZ1 (13). The cells were transferred to 6-well plates and the OAZ1-containing vector or control vector was transfected. When GFP was expressed, G418 (1,000 μg/ml) and flow cytometry were used to screen the stably transfected clones. SCC15 cells transfected with the OAZ1-expressed vector or the negative-control vector are referred as SCC15/OAZ1 and SCC15/GFP.

Cells (1×104/well) were transferred in 3 replicates to 96-well plates and cultured on standard conditions. At the time-points of 24, 48 and 72 h, the viability of the cells was analyzed after the addition of 20 μl MTT (5 mg/ml) and dimethyl sulfoxide. Absorbance was determined using the Multiskan MK3 Microplate Reader (Thermo Scientific, Waltham, MA, USA) at a wavelength of 490 nm.

Cells (2×105/well) were transferred in 3 replicates to 6-well plates. After 24 h of starvation, the cells were recovered for 36 h before analysis. The cells were treated according to the manufacturer’s instructions for the cell cycle detection kit (Nanjing KeyGen Biotech, Nanjing, China) and submitted to flow cytometric analysis.

Total RNA was isolated using the RNAiso plus kit (Takara Bio, Inc., Shiga, Japan). Full-length cDNA was generated using the PrimeScript RT reagent kit (Takara, Dalian, China). cDNA was subjected to RT-qPCR analysis using SYBR-Green I (Takara) and results are reported as the ratio alteration among groups. The primers used are presented in Table I.

The lentiviral vector expressing OAZ1 and GRF (ZsGreen), and the control vector expressing GFP were transfected into SCC15 cells separately and stable expression of GFP was observed in the two groups (Fig. 1A and B). Quantitative analysis showed that the mRNA level of OAZ1 was significantly elevated in the OAZ1-transfected group (Fig. 1C). The OAZ1 protein expression was verified by western blotting (Fig. 1D). The cells transfected with the control vector (Fig. 2C and D) demonstrated the typical appearance of SCC15 (Fig. 2A and B). However, the appearance of the OAZ1 transfectants exhibited evidence of epithelial island formation and increased cellular junctions indicating the terminal differentiation of the cells (Fig. 2E and F).

OAZ1 affects the expression of marker genes in cell differentiation

MTT assay was performed to detect the effects of OAZ1 expression on the proliferation of SCC15. Compared to the control, SCC15 cells stably expressing OAZ1 showed a significant reduction in the cell growth rate (P<0.001 compared to the other groups) (Fig. 4), indicating that OAZ1 expression inhibited the proliferation of SCC15.

The cell cycle profiles of the OAZ1-transfected SCC15 cells and the control cells were further examined (Fig. 5). The flow cytometry analysis showed that the cells in the G1 phase were increased in OAZ1-expressed SCC15 cells (65.26%) compared to the control (55.83%). Whereas cells in the S phase were decreased to 30.07% compared to the control (42.47%) (Table II). These results indicate that OAZ1 may inhibit the cell proliferation through induction of G0/G1 arrest.

Effect of OAZ1 on cell cycle in SCC15 cells.

The expression of two genes reported to be elevated during epithelial cell proliferation, K6A and K19, were also investigated. RT-qPCR results showed that K19 expression was significantly elevated (P<0.05), and the level of K6A remained stable (Fig. 3B).

OAZ1 can induce the degradation of SNIP1, leading to the release of CREB-binding protein (CBP), a key factor in the regulation of LOR transcription (14,15). To further explore the mechanism of LOR upregulation by OAZ1, the expression of SNIP1 in OAZ1-transfected cells was examined. The SNIP1 protein level was downregulated (Fig. 6B) in OAZ1 transfectants. The RNA interference experiment showed that inhibition of SNIP1 in the SCC15 cells induces the expression of LOR (Fig. 6A, C and D). These results indicate that OAZ1 may increase LOR expression through the degradation of SNIP1.

OAZ1 is an important regulator of cellular differentiation and proliferation. Studies have focused on its unique frameshift regulation mechanism, function in regulating polyamine metabolism and ability of inducing ubiquitin-independent degradation of numerous large molecules. Previously, it has been reported that OAZ1 has tumor suppressor activities and it can affect the apoptosis and proliferation of multiple tumor cell lines (6–8,16). There is also evidence that overexpression of OAZ1 can induce the differentiation of certain cancer cells (10,11,17). The mechanism underlying the tumor suppressor activity of OAZ1 remains unclear and further exploration may help with the understanding.

TSCC is one of the most common malignant oral tumors. Previous studies of the oral cancer cell line UM1 have proved that TSCC is an appropriate model to investigate the detailed molecular mechanisms of differentiation and proliferation regulation in oral cancer development (11,12). In the present study, the human TSCC cell line SCC15 was studied and a lentivirial vector was constructed that stably expresses the frame shift form of OAZ1 to continuously trigger the degradation of ODC. The expression of OAZ1 in SCC15 was verified by western blot analysis. Morphological study showed that the cells overexpressing OAZ1 exhibit the formation of more epithelial islands, which is a marker of terminal differentiation of epithelial cells. This is also consistent with the study on the hamster oral cancer cell line, HCPC-1 (10).

To elucidate the mechanism of OAZ1-induced cell differentiation in SCC15 cells, the expression of several terminal differentiation-associated genes was examined, including K1, K10, FLG, IVL and LOR. All these genes are marker genes in epithelial differentiation that have decreased expression in epithelial cancer cells, which is resumed during differentiation (18–25). In hamster oral cancer cells, OAZ1 has been proved to promote the expression of LOR and IVL (9,10). In the present study, OAZ1-expressed SCC15 cells showed significantly increased expression of the majority of the marker genes assessed, confirming the positive role of OAZ1 in epithelial differentiation. The gene involved in cellular junction, E-cadherin, was also examined as closer conjunction of cells expressing OAZ1 was observed and E-cadherin is reduced in squamous carcinoma (26). However, the mRNA level of E-cadherin showed no significant difference between the OAZ1-transfected SCC15 and control cells, which is consistent with a previous study (11). This suggests that factors other than E-cadherin may be involved in the induction of closer cellular junctions for this condition.

The mechanism underlying the induction of LOR expression in OAZ1-expressed SCC15 cells was further explored. LOR is the component of the cell membrane in terminal differentiated keratinocytes and p300/CBP can function as a bridge during its transcription-activator complex formation (15). SNIPI has been reported to competitively inhibit the binding of CBP in the promotor region, leading to the inhibition of transcription (14,27). The present study showed that OAZ1 overexpression promoted the degradation of SNIP1 and the silencing of SNIP1 by RNA interference resumed the level of LOR in SCC15 cells. These results indicate that OAZ1 may induce LOR expression partly through SNIP1 degradation.

In conclusion, the study showed that OAZ1 induced the formation of epithelial islands with significant upregulation of epithelial terminal differentiation marker genes in SCC15. OAZ1 expression also inhibited cell proliferation and induced G0/G1 arrest. OAZ1 simultaneously inhibited proliferation and induced differentiation of oral cancer cells in humans. This may be a novel perspective to consider in the induction of tumor cell differentiation, particularly in human oral cancer. 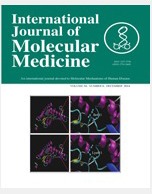