Ovarian cancer is the fifth leading cause of cancer-related-death in the US. Approximately 22,000 women suffered from ovarian cancer in 2010, about 14,000 of whom died of this disease (1). Since most patients with early-stage ovarian cancer seldom have any symptoms, at the time of diagnosis, over 75% are already in advanced stages with peritoneal dissemination and ascites, which are the typical symptoms (2). The standard treatment for ovarian cancer is cytoreductive surgery with platinum/taxane combination chemotherapy. Ovarian cancer is mostly sensitive to chemotherapy (3,4), but becomes ineffective over time due to the development of chemoresistance. The 5-year survival rate is only 40%, and has not improved in the last decade (1). Therefore, new strategies, such as immunotherapy and molecular-targeted therapy, may prove useful in improving the prognosis of ovarian cancer. The most common form of ovarian cancer spread is peritoneal dissemination (2). Although the mechanism involved in this process are largely unknown, studies indicate that, immunotolerance induction plays an important role (5,6).

Indoleamine-2,3-dioxygenase (IDO) is an enzyme that catalyzes the first and rate-limiting step in the kynurenine pathway of tryptophan catabolism. IDO was originally discovered in 1967 (7,8) in the rabbit small intestine and was first purified in 1978 (9). Subsequently, it was reported that IDO could be induced in the mouse lung with either influenza virus infection (10) or bacterial endotoxin shock (11). Proinflammatory mediators, such as interferon-γ or other cytokines can also stimulate IDO induction (12). The first study that described IDO as an immunosuppressant found that IDO in the mouse placenta prevented rejection of the allogeneic fetus (13). Recently, it was clarified that IDO can induce immunotolerance in patients with autoimmune diseases (14–17), chronic infections (18), and cancer (19). It was also reported that most human tumors express IDO (19) and that IDO can contribute to tumor-induced immunosuppression by starving T cells, which are sensitive to tryptophan deficiency. In this situation, tumor cells can escape immune surveillance via the action of IDO (13). Natural killer (NK) cells are important members of the innate immune system, which plays a role in inhibiting the growth and dissemination of several kinds of tumors (20). A series of receptors expressed by NK cells are known to modulate the cytotoxicity of NK cells against tumors (21). The tryptophan-derived catabolic kynurenine can reduce NK cell number and weaken NK cell cytotoxicity by inhibiting NK cell receptors, thus contributing to tumor progression (22). IDO is frequently expressed in many cancers such as gastric, pancreatic, colorectal, and prostate cancers (19). In the gynecological field, IDO expression has been observed in cervical, endometrial, and ovarian cancer (19), and associations between its expression and the prognosis of these cancers have been reported (23–26).

RNA interference (RNAi) is a good technique for gene silencing, that involves a post-transcriptional gene-silencing mechanism (27). Among the different types of RNAi techniques, the use of small interfering RNAs (siRNAs) effectively suppresses gene expression, but the suppression is transient (28), which limits its therapeutic use. Short hairpin RNAs (shRNAs) driven by polymerase III promoters have been developed as an alternative strategy to attain long-term stable target gene silencing and understand the consequence of stable silencing (29,30).

The NK cell line KHYG-1 (32) was purchased from the Japanese Collection of Research Bioresources (JCRB, Osaka, Japan). Cells were cultured in RPMI-1640 medium supplemented with 100 nM of human interleukin-2 (R&D Systems, Minneapolis, MN) and 10% inactivated fetal calf serum (Sigma), at 37°C in a 5% CO2 atmosphere for no longer than 8 weeks after recovery from frozen stocks.

The DNA oligonucleotides encoding shRNA targeting the IDO gene (forward: 5′-CACCGGGGCAGATTATAAGAATTACGTGTGCTGTCC GTAATTCTTGTAGTCTGCTCCTTTTT-3′, reverse: 5′-CCC CGTCTAATATTCTTAATGCACACGACAGGCATTAAGA ACATCAGACGAGGAAAAATACG-3′) were synthesized, annealed, and inserted into the BspMI site of the vector piGENE PURhU6 (34), which contained a human U6 promoter, and a puromycin resistance gene. The shRNA expression plasmid (piGENE PURhU6/shIDO) and control plasmid (piGENE PURhU6) were transfected into SKOV-3 using Lipofectamine LTX and Plus Reagent (Invitrogen, Carlsbad, CA) according to the manufacturer’s instructions. The cells were selected using 0.5 μg/ml puromycin (Calbiochem, Darmstadt, Germany). Resistant clones were obtained after 4 weeks as SKOV-3/shIDO, SKOV-3/Mock. The cells were subsequently maintained in the presence of 0.5 μg/ml puromycin.

Protein (10 μg) extracted from a homogenate of cultured cells was mixed with 2X SDS-PAGE sample buffer [120 mM Tris-HCl (pH 6.8), 4% SDS, 20% glycerol, 0.004% bromophenol blue, and 10% 2-mercaptoethanol]. The mixture was heated at 95°C for 2 min, and electrophoresed on a 0.1% SDS-10% polyacrylamide gel, and then the proteins were blotted onto a polyfluorovinylidene membrane. The menbranes were blocked with Non-Protein Blocking Agent (ATTO Corporation, Tokyo, Japan) at room temperature for 1 h, and incubated with anti-human IDO monoclonal antibody (1:1,000) and anti-human actin polyclonal antibody (1:200) for 1 h at room temperature. The membrane was washed with phosphate-buffered saline (PBS)-Tween-20 three times, and then incubated with horseradish peroxidase-conjugated secondary anti-mouse antibody (Thermo, Rockford, IL) or anti-rabbit antibody (Thermo). Signals were detected by chemiluminescence (ECL kit; Amersham Biosciences, Piscataway, NJ) on X-ray film.

SKOV-3/shIDO and SKOV-3/Mock cells (500 of each line) were seeded into a 96-well plate, and cultured in RPMI-1640 medium containing 10% fetal calf serum. Every 24 h, cells were counted using a colorimetric assay with the Cell Proliferation kit II (XTT) (Boehringer Mannheim GmbH Biochemica, Mannheim, Germany), and a growth curve was drawn from the results.

The sensitivity of SKOV-3/shIDO and SKOV-3/Mock cells to NK cells was investigated by colorimetric assay using XTT. SKOV-3/shIDO and SKOV-3/Mock cells (500 of each line) were seeded into a 96-well plate and co-cultured with KHYG-1 cells (0, 500, 1000, or 2000 cells) in RPMI-1640 medium containing 10% fetal calf serum for 72 h. After 3 washes with PBS to exclude KHYG-1 cells completely, the viable cell count was determined by colorimetric assay and calculated as the percent of control cells (cultured without KHYG-1 cells).

Four- to six-week-old female BALB/c nude mice (Japan Clea Laboratories, Tokyo, Japan) were used. All animal experiments were conducted according to the institutional and national guidelines for animal experiments.

SKOV-3/shIDO and SKOV-3/Mock cells (5×106 cells of each line) were inoculated subcutaneously into the back of mice to induce tumor growth. The tumor volume [(long diameter) × (short diameter)2 × 1/2] was measured twice a week to draw a tumor growth curve.

SKOV-3/shIDO and SKOV-3/Mock cells (5×106 cells of each line) were injected intraperitoneally into nude mice, and the mice were observed until death. A survival curve was constructed using the Kaplan-Meier method. The mice were checked for survival twice a day.

At one week after subcutaneous tumor cell inoculation, mice were sacrificed under isoflurane anesthesia, and the tumor was removed. After formalin fixation, paraffin sections were prepared, deparaffinized, and treated with hydrogen peroxide for 30 min to block endogenous peroxidase. The sections were then reacted with a 1:10 dilution (5 μg/ml) of anti-mouse CD49b primary antibody for 16 h at room temperature, washed 3 times washes with PBS, and then incubated with enzyme-conjugated streptavidin for 30 min. The sections were again washed with PBS 3 times, and color was developed using the diaminobenzidin method. The number of stained NK cells was counted under high-power magnification (x400).

Growth curve analyses of SKOV-3/shIDO and SKOV-3/Mock cells showed no significant difference between the two groups, suggestiong that the downregulation of IDO did not affect cell growth in vitro (Fig. 2).

Sensitivity of transfectants against NK cells in vitro

The proportion of viable tumor cells co-cultured with NK cells is shown in Fig. 3. The percent survival of SKOV-3/shIDO cells was significantly lower than that of the control cells, indicating that the downregulation of IDO reinforced the sensitivity of tumor cells against NK cells.

Both SKOV-3/shIDO and control cells formed small nodules one week after inoculation (Fig. 4). Subsequently, the tumors in the control group were enlarged, whereas those in the SKOV-3/shIDO group were reduced, suggesting that the downregulation of IDO inhibited tumor growth in vivo.

Number of NK cells in the tumor stroma

Immunostaining of NK cells (black arrowhead) shows accumulation of NK cells in the stroma of SKOV-3/shIDO and control subcutaneous tumors (Fig. 5). The number of NK cells (94±29) that accumulated in the SKOV-3/shIDO tumors was significantly higher than that (3±2) in the control tumors (P<0.01) (Fig. 6). These results suggest that the downregulation of IDO promoted NK cell accumulation around the tumor.

Lack of the essential amino acid tryptophan and accumulation of its metabolite, kynurenine, inhibit cell growth and induce apoptosis. T cells are particularly sensitive to this type of stress (13). Regarding the mechanism of cancer cell immunotolerance, IDO has been shown to promote local tryptophan depletion, resulting in T-cell function suppression around IDO-expressing cancer cells and local immunotolerance (19). The possibility cannot be excluded that IDO expression is involved in the immunotolerance of ovarian cancer through such a T cell-mediated mechanism. We initially obtained a murine ovarian tumor cell line (OV2944-HM-1) with the ability to develop into subcutaneous tumor and disseminate peritoneally in immunocompetent mice. However, IDO was hardly detected in this cell line, according to the results of Western blot analysis using an anti-mouse IDO antibody (data not shown). Therefore, we chose the human ovarian cancer cell line (SKOV-3) that constitutively expresses IDO and implanted them in nude mice. Nude mice congenitally lack T cells; therefore, in this experimental system, we could not examine the effect of IDO on T-cell function.

Typical methods of inhibiting IDO function include the use of 1-methly-tryptophan (1-MT) and gene silencing by RNAi. In IDO-catalyzed tryptophan metabolism, 1-MT competes with tryptophan for IDO, acting as an IDO inhibitor (36). Inaba et al reported that the oral administration of 1-MT to the host suppressed the tumor growth of IDO-overexpressing ovarian cancer cells with enhanced proliferative activity (26). Similarly, in our previous study, we showed that oral administration of 1-MT inhibited the tumor growth potential of IDO-transfected ovarian cancer cells with enhanced proliferative activity (35). In our study, mice given 1-MT orally showed no fatal side effects (35). These findings suggest the possibility of IDO-targeted molecular therapy for ovarian cancer using the oral administration of 1-MT or its analogues. Muller et al reported that the combination of 1-MT with paclitaxel synergistically regressed an autochthonous breast cancer (37). In addition, Inaba et al demonstrated that treatment with 1-MT plus paclitaxel synergistically prolonged mouse survival compared to treatment with paclitaxel alone in an IDO-overexpressing ovarian cancer peritoneal carcinomatosis model (26). Since paclitaxel is a key drug in the chemotherapy of ovarian cancer, the combined use of such an anticancer drug and targeted therapy against IDO may be advantageous in treating ovarian cancer.

Compared to 1-MT treatment, RNAi demonstrates higher potency and efficiency (38). To date, chemically synthesized siRNA and vector-mediated expression of shRNA are the more commonly used RNAi techniques for gene silencing in mammalian cells (30,39). Although siRNA can be more easily transfected into cancer cells, and its silencing function is more effective, its function is transient. The remarkable advantages of shRNA is that the inhibition of target genes can last for weeks or even months, making it possible to elucidate the consequences of long-term stable silencing of a gene (30). In actual clinical settings, nanoparticle-based vectors (40) or viral-based expression vectors could be used to deliver the IDO shRNA to the cancer cells.

The results of this study demonstrate that the downregulation of IDO in human ovarian cancer cells constitutively expressing IDO inhibits ovarian cancer progression, suggesting that the use of IDO-targeted shRNA as a potentially effective molecular-targeted therapy for ovarian cancer. 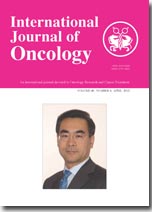