DEC1 (BHLHE40/Stra13/Sharp2) is a basic helix-loop-helix (bHLH) transcription factor that is involved in the regulation of apoptosis and cell proliferation and the response to hypoxia. Epithelial-mesenchymal transition (EMT) is an important step leading to invasion and migration of various tumor cells, and TGF-β treatment has been shown to induce cancer cells to undergo EMT. However, the significance of DEC1 in TGF-β-induced EMT remains unknown. We examined the role of DEC1 in EMT of PANC-1 cells, a human pancreatic cancer cell line. As a result, we found that DEC1 was upregulated by TGF-β in PANC-1 cells, and regulated the expression and the levels of nuclear, cytoplasmic or membrane localization of EMT-related factors, including phosphorylated Smad3 (pSmad3), snail, claudin-4 and N-cadherin. In the presence of TGF-β, DEC1 knockdown by siRNA inhibited morphological changes during EMT processes, while TGF-β induced PANC-1 cells to taken on a spindle-shaped morphology. Furthermore, a combination treatment of DEC1 expression with TGF-β was closely linked to the migration and invasion of PANC-1 cells. Immunohistochemically, DEC1 and pSmad3 were detected within pancreatic cancer tissues, whereas claudin-4 expression was weaker in the cancer tissues compared with the adjacent non-cancer pancreatic tissues. These findings suggest that DEC1 plays an important role in the regulation of these EMT-related factors in pancreatic cancer.

Epithelial-mesenchymal transition (EMT) is a dynamic process that occurs during the tumor progression of various cancers. It is characterized by the loss of epithelial factors, including E-cadherin, claudins, and cytokeratins, and the upregulated expression of mesenchymal markers, including N-cadherin, vimentin and fibronectin. Cancer cells that have undergone EMT are thought to acquire a fibroblast-like motile and an invasive phenotype (1,2).

Transforming growth factor (TGF)-β one of the most potent inducers of EMT, induces spindle-shaped cell morphology, inhibits cell proliferation, and promotes tumor cell motility and invasion (2–4). TGF-β binds to two different serine/threonine kinase receptors; type I (TGF-βRI) and type II receptors (TGF-βRII). The formation of hetero-dimers of TGF-βRI and TGF-βRII leads to the activation of the signaling pathways mediated by TGF-β (5). Human pancreatic cancer (PANC-1) cells express both TGF-βRI and TGF-βRII, whereas MIA PaCa-2 pancreatic cancer cells do not express either of them (6). Smads are key intracellular mediators of the transcriptional responses to TGF-β, and Smad4 mutations are known to be present in more than 50% of pancreatic cancer cases (7,8). In addition, the activation of other Smads plays important roles in the tumor progression of pancreatic cancer. The phosphorylation of Smad2 and Smad3 causes them to translocate from the cytoplasm to the nucleus and associate with Smad4. In the nucleus, the activated Smad complex binds to target gene promoters and regulates the transcriptional responses to TGF-β (5,9,10).

There are several EMT inducing transcription factors, such as snail, slug, twist and ZEB1 (11–14). Since there were some reports on the roles of snail in PANC-1, we selected snail as a marker of positive control during EMT. Snail is expressed in various tumor cells and regulates the expression of E-cadherin, claudins, and some mesenchymal markers, which are involved in tumor invasion, metastasis, and cell motility (1,15,16). Furthermore, TGF-β directly activates snail transcription through the Smad3 phosphorylation (17).

Knockdown of DEC1 by RNA interference

Short interference RNA (siRNA) against DEC1 was synthesized by Qiagen (Hilden, Germany). The sequences of the sense and anti-sense DEC1 siRNA and the negative control (scrambled) siRNA, and the siRNA transfection were performed as described previously (18).

DEC1 overexpression was induced using pcDNA vector as described previously (19). After transfection, the cells were incubated for 24 h and subjected to the invasion assay.

We prepared three independent RNA samples (n=3). Total-RNA was isolated and first-strand cDNA was synthesized as described previously (19). The real-time PCR was performed using SYBR-Green Master Mix (Life Technologies, Carlsbad, CA, USA). The sequences of the primers and the sizes of products are shown in Table I.

Sequences of the primer sets and the product sizes of real-time PCR.

The invasion assay was performed using a BD BioCoat Matrigel invasion chamber kit (Becton Dickinson, Franklin Lakes, NJ, USA). PANC-1 cells were separated using cell dissociation solution (Sigma) and then (5×104 cells/600 μl) were added to the top chamber of a cell culture insert in a 24-well companion plate. After overnight incubation, the cells that had invaded the lower surface of the membrane were fixed with methanol and subjected to Giemsa staining. The number of cells that had migrated was quantified by counting them in ten random distinct fields using a light microscope.

For the migration assay, PANC-1 cells were seeded in a 4-chamber slide glass, and an artificial ‘wound’ was carefully created at 0 h by scratching the confluent cell monolayer with the tip of a P-200 pipette. Microphotographs were taken at 0, 24 and 48 h.

We examined immunohistochemical analyses of surgically resected pancreatic cancers (n=17), which have been filed in Hirosaki University Hospital, Japan (Table II). All of the 17 cases examined were invasive ductal carcinoma of pancreas. Histological specimens were retrieved from the archives of our hospital according to the guidelines produced by the Japanese Society of Pathology.

Immunohistochemistry was performed as described previously (27). The sections were incubated overnight at 4°C with anti-DEC1 (1:100), pSmad3 (1:200), or claudin-4 (1:400) antibodies diluted in Can Get Signal Immunostain Solution (Toyobo Co.). Finally, the sections were counterstained with Mayer’s hematoxylin.

DEC1 expression was induced by TGF-β in PANC-1 cells

In the presence of TGF-β, DEC1 expression was closely involved in the migration and invasion

We examined whether DEC1 expression was involved in the migration and invasion of PANC-1 cells. In the presence of TGF-β, DEC1 siRNA delayed cell migration for 24–48 h in comparison with those transfected with the control siRNA (Fig. 3). We performed an invasion assay in which we transiently transfected the cells with a DEC1 expressing plasmid. As a result, the number of invasive PANC-1 cells with a spindle-shaped morphology was increased in the presence of TGF-β (Fig. 4). The invasion assay also demonstrated that there were significantly more invasive spindle-shaped cells among the cells transfected with DEC1 than among those transfected with the control pcDNA vector.

We demonstrated that a combination treatment of DEC1 siRNA with TGF-β downregulated the Smad3 phosphorylation, and the expression of TGF-βRI and snail, and it also decreased the amounts of pSmad3 and snail in the nucleus. These findings suggest that DEC1 is an upstream factor of these genes. It has been reported that DEC1 upregulates and downregulates target genes by binding to sp1 and E-box sites, respectively (21,32,33). The promoter region of TGF-βRI contains sp1 sites (34). Therefore, we speculate that DEC1 binds to sp1 sites of the TGF-βRI promoter and regulates EMT-related factors through pSmad3/snail signaling. TGF-β also affects the ERK1/2 phosphorylation independent of Smad pathway (35). However, DEC1 siRNA regardless of TGF-β had little effect on the ERK1/2 phosphorylation. These results suggest that DEC1 specifically regulates the pSmad3/snail pathway induced by TGF-β. In MIA PaCa-2 cells lacking the TGF-β receptor, TGF-β treatment had little effect on the expression of DEC1 and snail, and the Smad3 phosphorylation, and cell morphology. These findings suggest that DEC1 regulates pSmad3 by positive and negative feedback systems during EMT of pancreatic cancer.

Claudin-4 expression has been shown to decrease the invasiveness and metastatic potential of pancreatic cancer (36). Claudin and E-cadherin expression were found to be down-regulated in breast, esophageal, and head and neck cancer tissue (37–39). The promoter regions of claudins and E-cadherin contain E-boxes (15,40,41). We showed that DEC1 had effect on the expression and the amounts of claudin-4, claudin-7, and E-cadherin in the cell membrane, while DEC1 and claudin-4 were immunohistochemically detected in cancer tissues and non-cancerous ducts, respectively. Based on the above findings, DEC1 is considered to negatively regulate the expression of E-cadherin and claudins.

Our study is the first report to demonstrate marked pSmad3 immunoreactivity in pancreatic cancer cells compared with that in the adjacent non-cancerous pancreatic tissues. In particular, strong pSmad3 immunoreactivity was found in the nucleus of the spindle-shaped cancer cells, which were located at the cancer invasive front. A recent study reported that Smad3, but not Smad2, increased the expression of matrix metalloproteinase-9 in lung cancer cells and contributed to EMT through TGF-β (42) which suggests that pSmad3 expression is closely involved in EMT of cancer cells.

In the present study, we demonstrated that DEC1 has inducible effects on EMT, which are mediated through the Smad3 phosphorylation, and plays an important role in EMT of pancreatic cancer; i.e., it alters the expression of EMT-related factors and affects the morphology, migration, and invasion of cancer cells.

This study was supported by Grants-in-Aid for Science from the Ministry of Education, Culture, Sports, Science, and Technology of Japan; a Grant for Hirosaki University Institutional Research; and the Fund for the Promotion of International Scientific Research. 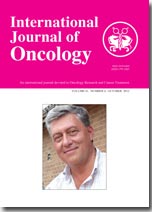