Photodynamic therapy (PDT) is a treatment for the selective destruction of cancerous and non-neoplastic cells that involves the simultaneous presence of light, oxygen and a light-activatable chemical known as a photosensitizer, with a photosensitive molecule that can be localized in the target cells (1). Photofrin, a representative of the first generation photosensitizers, is transformed by haematoporphyrin derivatives (HpD) and absorbs light up to 640 nm (2). It is the most widely used photosensitizer in clinical PDT, and has been approved by health agencies to treat human solid malignancies (1). PDT has been indicated as a promising treatment for a wide range of cancers, such as cervical cancer and head and neck cancer (3–5). After PDT, the release of mitochondrial cytochrome c into the cytosol leads to apoptosis (6), which is characterized by chromatin condensation, cleavage of chromosomal DNA into internucleosomal fragments, cell shrinkage, membrane blebbing, and the formation of apoptotic bodies without plasma membrane breakdown (6). Lu et al reported that methylene blue-mediated PDT induces mitochondria-dependent apoptosis in HeLa cells (7).

The photosensitizer transfers energy from light to molecular oxygen to generate reactive oxygen species (ROS), particularly singlet oxygen, hydroxyl radicals and peroxides. This photosensitizer can react with oxygen via energy transfer processes, generating singlet oxygen (1O2) or it can participate in electron transfer processes, leading to radical formation (8). Normally, direct and indirect evidence supports the prevalent role of 1O2 in the molecular processes initiated by PDT (9). Both reactions can lead to damage to the cellular components and cell death by either apoptosis or necrosis. The apoptosis caused by ROS generated in HeLa cells by Hematoporphyrin monomethyl ether (HMME)-induced PDT was reported to be mediated by cytochrome c release and caspase-3 activation (10).

Curcumin (1,7-bis(4-hydroxy-3-methoxyphenyl)-1,6-heptadiene-3,5-dione), also known as diferuloymethane, is the major yellow pigment in turmeric (Curcuma longa) and is one of the most extensively studied phytochemicals with chemo-preventive potential (11). Curcumin has been used in traditional Asian, Indian medicine for thousands of years to treat a range of diseases (12). Curcumin has antitumor properties in cancers of the breast (13), glioblastoma (14), head and neck (15), colon (16) and leukemia (17). The major mechanism by which curcumin induces cytotoxicity in tumor cells is the induction of apoptosis. Curcumin decreases the expression of anti-apoptotic members of the Bcl-2 family and elevates the expression of Bax, caspase-3, -8 and -9. In addition, it induces apoptosis through the mitochondrial pathway involving the release of cytochrome c, and then activates PARP cleavage (18). Karmakar et al reported that curcumin activates caspases for apoptosis in human malignant glioblastoma U87MG cells (14).

Conventional cancer therapies, including PDT and chemotherapy as a single modality, have a limited but important role in the overall treatment of most solid tumors. Therefore, the strategies of cancer treatment using combined therapies are considered more promising for higher efficacy, resulting in better survival rates. Cancer therapies combining chemoprevention including curcumin may have enhanced antitumor activity with a decrease in the toxicity caused by PDT. Recent evidence suggests that the photosensitizer effect of curcumin on UVB-irradiated HaCaT cells occurs through activation of the caspase pathways (19). In addition, Dujic et al reported that low concentrations of curcumin induce apoptosis in skin keratinocytes only in combination with UVA or visible light (20).

In this study, to confirm the interaction between photofrin-induced PDT and curcumin during combined mortality, this study examined effect and potential mechanism of a combination of PDT and curcumin on apoptotic cell death in AMC-HN3 cells.

The cells were seeded in 6-well plates, 96-well plates or plates, 100 mm in diameter. The cells were treated with a series of 2-fold dilutions of photofrin, starting at 50 μg/ml and incubated for 6 h at 37°C in a 5% CO2 incubator. Subsequently, the photosensitized cells were irradiated with 630 nm diode laser (0.83 mW/cm2) for 15 min at room temperature. After irradiation, the cells were incubated in a humidified atmosphere at 37°C and 5% CO2 for the indicated times.

The MTT assay was used to assess the cell viability of AMC-HN3 cells after the combination treatment. The cells attached in a 96-well plate (1,000 cells/well) were treated with 25 μM of curcumin for 6 h. Subsequently, the cells were incubated with 3 μg/ml photofrin for 6 h. The photosensitized cells were then irradiated with a 630 nm diode laser for 15 min. The cells were then incubated for 24 h at 37°C in a 5% CO2 incubator and exposed to MTT [3-(4,5-dimethylthiazol-2-yl)-2,5-diphenyl-tetrazolium bromide] (2 mg/ml, Sigma) for 4 h. The solution was changed to 150 μl of dimethylsulfoxide (DMSO, Kanto, Japan). After 5-min incubation and shaking in microplate mixer (Amersham Pharmacia Biotech, Amersham, UK), the optical density (OD) was measured using a microplate reader (Bio-Rad, Hercules, CA, USA) at 540 nm wavelength. The cell viability was calculated using the following formula: Cell viability (%) = Mean optical density of treated wells/Mean optical density of control wells × 100.

Hoechst 33342 (Sigma) and PI (Sigma) double staining was used to identify the cell death pattern. The nuclear morphology was assessed with the cell membrane-permeant supravital DNA dye Hoechst 33342 (excitation wavelength, 348 nm; emission, 479 nm). Hoechst 33342, unlike PI, enters and stains the nucleus of both viable cells and cells with apoptosis or necrosis. The plasma membrane integrity was assessed using the cell membrane-impermeant DNA dye PI (excitation wavelength 535 nm; emission 617 nm). Necrosis was determined based on the positive PI staining in red color, which is indicative of a loss of membrane integrity (21). Briefly, 3 h after PDT, the cells were stained with Hoechst 33342 (1 μg/ml) for 30 min. The medium was then changed and the cells were incubated with PI (1 μg/ml) for 10 min before the observations by confocal laser scanning microscopy (Carl Zeiss, Oberkochen, Germany).

The intracellular accumulation of ROS was determined using H2DCFDA (2′,7′-Dichlorodihydro fluorescein diacetate, Molecular Probes, Eugene, OR, USA), as previously described (22). Briefly, 1 h after PDT, the cells were incubated with 2 μM H2DCFDA for 30 min and washed gently twice with DPBS. Images of green H2DCFDA were collected by LSM-510-META confocal microscopy (Carl Zeiss) with an excitation wavelength of 488 nm, a 560 nm dichroic mirror, and a 505 to 550 nm band pass barrier filter.

Rhodamine 123 (Molecular Probes) was used to evaluate the mitochondrial membrane potential (Δψm), as predicted previously (22). Briefly, 2 h after PDT, the cells were re-suspended and loaded with 1 μM rhodamine 123 for 30 min. The signal for rhodamine 123 was detected by the FL1-H (530 nm) channel and the data were analyzed using the CELLQuest Program (Becton Dickinson, San Jose, CA, USA). At least 20,000 events were counted.

Six hours after PDT, the cells were washed twice with cold DPBS, and the cytosolic fraction and total protein were extracted in CE1 buffer (Qiagen, Valencia, CA, USA) and RIPA buffer, respectively. A Bradford assay (Bio-Rad) was used to determine the protein concentration by measuring the optical density at 595 nm using a spectrophotometer (Biochrom, Cambridge, UK). The protein samples were mixed with a 5X loading buffer (250 mM Tris, pH 6.8, 40% glycerol, 4% β-mercaptoethanol, 0.08% bromophenol blue, 8% sodium dodecyl sulfate), heat-denatured at 95°C for 10 min, loaded onto the 10% sodium dodecyl sulfate polyacrylamide gel and at 100 V for 90 min. After electrophoresis, gels with the resolved proteins were transferred to PVDF membranes (Bio-Rad) and blocked for 1 h in 10% skim milk. Each primary antibody (caspase-3, -9, cyto-chrome c and PARP) was diluted in 5% skim milk and added to the membrane for 90 min. The membranes were washed five times with DPBS and detected with horseradish peroxidaseconjugated secondary IgG for 1 h. The labeled protein bands were detected using a Kodak in vivo image analyzer (Eastern Kodak, Rochester, NY, USA).

The attached cells were co-treated with 25 μM of curcumin and either 40 mM D-mannitol or 5 mM glutathione for 6 h. The cells were then incubated with 3 μg/ml photofrin in the presence of the individual antioxidant for 6 h. After washing with fresh medium, the cells were subjected to irradiation under the aforementioned conditions.

The significance of the differences was evaluated using a Student’s t-test. A p-value <0.05 was considered significant.

Increase of cytotoxic and apoptotic effect

To determine if a pretreatment with curcumin affects the generation of ROS by PDT, the intracellular ROS level was detected using the fluorescent probe H2DCFDA, which is readily oxidized to 2′,7′-dichlorofluorescein (DCF) in the presence of ROS. Compared to the control group, curcumin and PDT alone induced remarkable generation of ROS. The ROS signal induced by the combination group was higher than that of each single treatment (Fig. 2A).

To further examine the activation of mitochondria, the collapse of Δψm was quantified by flow cytometry. Compared to the control group, a decrease in Δψm, a leftward shift in the fluorescence curve, was clearly observed in the curcumin or PDT treatment alone group. The combination group showed a more intense loss of Δψm than that each single treatment group (Fig. 2B).

Increase of caspase-9, -3 and PARP activities by combination treatment

Decrease of combination treatment induced ROS and cytotoxicity by glutathione

Inhibition of apoptosis by glutathione

PDT must provide an enhanced therapeutic response to be used as a first-line curative modality (23). Consequently, combination regimens consisting of PDT and a secondary treatment can be designed to increase the effectiveness of PDT. The systemic toxicity might be reduced due to the use of a lower dose of photosensitizer during combination PDT.

The strategies of cancer treatment using combined therapies or combined agents with distinct molecular mechanisms are considered to be more promising for higher efficacy in the induction of apoptosis. The number of publications regarding the potentiated antitumor effects of cancer therapies using the chemopreventive agent, curcumin, has increased dramatically. In addition, common cancer therapies combined with these dietary compounds may exert enhanced antitumor activity through synergistic action (24).

Curcumin can both stimulate and inhibit apoptotic signaling. For example, curcumin induces apoptosis in human melanoma cells (30–60 μM for 24 h) (25), whereas recent studies reported that curcumin attenuates UV irradiation-induced ROS formation and apoptosis in epidermoid carcinoma A431 cells (25–50 μM for 2–3 h) (26), and prevents PDT-induced cell death (27). In this study, curcumin alone decreased the cell viability of AMC-HN-3 cells in a dose- and time-dependent manner (data not shown). The curcumin plus PDT group showed an increased cytotoxic effect compared to each single group (Fig. 1A).

The mitochondria are a major source of ROS in cells. As reported, ROS play an important role in controlling a range of cell functions, such as proliferation and apoptosis (28). In the apoptosis-inducing concentrations, confocal microscopy analysis using the cell permeable dye H2DCFDA as an indicator of ROS generation showed that the intracellular oxidative stress caused by single treatments were further enhanced by the combination therapy (Fig. 2A). The generation of ROS peaked at 1 h after PDT; the signal of which subsequently decreased later, indicating that ROS formation is transient.

Caspases play critical roles in the initiation and execution of apoptosis and are activated by cytochrome c (33). In the present study, the combination group showed stronger caspase-9, -3 and PARP activation than those in the single treatment groups (Fig. 3).

In summary, these results suggest that the combined PDT with curcumin has enhanced cytotoxic and apoptotic effects on AMC-HN3 cells via a mitochondria-dependent apoptosis pathway. In addition, the generation of ROS plays an important role in this combination therapy-induced apoptosis.

We would like to thank the Medical Laser Research Center, Dankook University for the financial support. 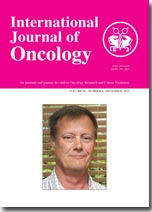