Glioblastoma multiforme, the most common primary brain tumor in adults, is one of the deadliest of all human cancers with a median survival of <2 years at best, even with the current standard of care consisting of maximal surgical resection followed by radiotherapy with concomitant and adjuvant temozolomide (1,2). Early recurrence, which eventually becomes fatal, is inevitable even after successful initial treatment of glioblastoma, for which cancer stem cells are now deemed responsible (3,4). Cancer stem cells are a small subpopulation of cancer cells comprising a tumor that possess stem cell-like properties as well as the capacity to initiate a tumor and are often associated with resistance against conventional chemo- and radiotherapies (5,6). Elimination of the cancer stem cell population by overcoming their therapy resistance, therefore, is considered a key to successful management of glioblastoma as well as to realization of long-term survival of patients with this devastating disease. Although it still remains an open question whether or not cancer stem cells of glioblastoma are invariably resistant to temozolomide, current literature unanimously indicates that they often express O6-methylguanine DNA methyltransferase (MGMT) and that MGMT expression is associated with high resistance to temozolomide (7). MGMT is a repair enzyme that rapidly removes the methyl group attached by temozolomide at the O6 position of the guanine residue. As such, MGMT expression is considered to be a major mechanism for temozolomide resistance of glioblastoma, which has indeed been supported by a wealth of data from both clinical and basic studies (8–12). Thus, the accumulating evidence supports the idea that elucidating how MGMT expression is regulated in cancer stem cells of glioblastoma would be a valuable strategy to control its expression and, by so doing, render them susceptible to temozolomide treatment.

Patient-derived stem-like glioblastoma cells used in this study (GS-Y01, GS-Y03, GS-NCC01 and TGS01) were directly established from glioblastoma tissues in accordance with protocols approved by the Institutional Review Boards of the institutions where they were established. The establishment and characterization of the stem-like glioblastoma cells have been described (13–15). The cells were maintained under the monolayer stem cell culture condition reported previously (14,15).

Throughout this study, for temozolomide treatment, cells were exposed to 50 μM temozolomide for 4 h, after which they were cultured in the absence of temozolomide until being subjected to analyses. In each set of treatment, cells were examined for their viability at the end of pretreatment (i.e., SP600125 treatment and/or knockdown of JNK and/or MGMT), and an equal number of viable cells were used for subsequent temozolomide/control treatment. Live and dead cells were identified by their ability and inability to exclude vital dyes [trypan blue and propidium iodide (PI)], respectively. Unless otherwise specified, both adherent and non-adherent cells in the dishes were collected, and after centrifugation, re-suspended in phosphate-buffered saline (PBS). The cell suspension was then mixed with an equal volume of PBS containing trypan blue (0.4% w/v, final concentration, 0.2%) and examined under a phase-contrast microscope using a hemocytometer. The percentage of dead cells was defined as 100 × the number of dead cells / (the number of viable cells + the number of dead cells). Alternatively, cells were incubated in situ with PI (1 μg/ml) and Hoechst 33342 (10 μg/ml) for 10 min at 37°C in the CO2 incubator, to stain dead cells and the cell nuclei, respectively. Then the numbers of PI- and Hoechst-positive cells were scored under a fluorescence microscope (CKX41; Olympus, Tokyo, Japan), and the percentage of PI-positive cells (dead cells) against Hoechst-positive cells (total cells) was determined.

For colony formation, cells were seeded at a low, colony-forming density (5×103 cells per 60-mm dish) and cultured for ∼4 weeks. The cells were then fixed with formaldehyde (4% v/v) followed by staining with crystal violet (0.1% w/v). Colonies [consisting of 8 or more cells (progenies) derived from a single cell] were counted using a microscope.

Cells were washed with ice-cold PBS and lysed in the RIPA buffer [10 mM Tris-HCl (pH 7.4), 0.1% SDS, 1% sodium deoxycholate, 150 mM NaCl, 1 mM EDTA, 1.5 mM Na3VO4, 10 mM NaF, 10 mM sodium pyrophosphate, 10 mM sodium β-glycerophosphate and 1% protease inhibitor cocktail set III (Calbiochem)]. After centrifugation for 10 min at 14,000 × g at 4°C, the supernatants were recovered as the cell lysates, and the protein concentration of the cell lysates was determined by the BCA protein assay kit (Pierce Biotechnology, Inc., Rockford, IL, USA). Cell lysates containing equal amounts of protein were separated by SDS-PAGE and transferred to a polyvinylidene difluoride membrane. The membrane was probed with a primary antibody and then with an appropriate HRP-conjugated secondary antibody according to the protocol recommended by the manufacturer of each antibody. Immunoreactive bands were visualized using Immobilon Western Chemiluminescent HRP Substrate (Millipore, Billerica, MA, USA).

Results are expressed as the means ± SD, and differences were compared using the 2-tailed Student’s t-test. P-values <0.05 were considered statistically significant and indicated with asterisks in the figures.

Inhibition of MGMT expression in stem-like glioblastoma cells by SP600125

Since SP600125 specifically sensitized stem-like glioblastoma cells with MGMT expression to temozolomide, we next asked whether SP600125 did so through modulation of the expression and/or activity of MGMT. To this end, we first examined the effect of SP600125 on the mRNA expression of MGMT in stem-like glioblastoma cells. The results indicated that GS-Y01, GS-Y03 and TGS01 but not GS-NCC01 cells express detectable levels of MGMT mRNA, which were significantly decreased after 3-day pretreatment with SP600125 (Fig. 3A). The time course analysis using GS-Y03 cells revealed that MGMT mRNA gradually declined over 3 days during the SP600125 pretreatment period (Fig. 3B). Consistent with the change of the mRNA level, the SP600125 pretreatment also decreased the expression of the MGMT protein, with some time lag compared to that of mRNA (Fig. 3C). Further analysis showed that SP600125 inhibited both JNK activity (as monitored by phospho-c-Jun expression) and MGMT protein expression at 10 μM or higher concentrations (Fig. 3D). Inhibition of MGMT protein expression by SP600125 was similarly demonstrated in TGS01 and GS-Y01 cells (Fig. 3E; data not shown for GS-Y01). We also confirmed that GS-NCC01 cells do not express MGMT protein and that SP600125 does inhibit the JNK activity in GS-NCC01 cells, excluding the possibility that the lack of sensitization effect is due to failure of SP600125 to inhibit JNK in GS-NCC01 cells (Fig. 3F).

To definitively establish that JNK is actually involved in the regulation of the MGMT expression and temozolomide resistance of stem-like glioblastoma cells, we knocked down JNK and examined its effect on these parameters. To achieve effective reduction in the JNK activity, we introduced into GS-Y03 and TGS01 cells a combination of siRNAs against JNK1 and JNK2. Successful knockdown of JNK1 and JNK2 resulted in reduced expression of phospho-c-Jun, and also caused decreased MGMT expression in parallel with the reduced JNK activity (Fig. 4A). The stem-like glioblastoma cells were then examined for their sensitivity to temozolomide in the presence and absence of JNK knockdown. Whereas temozolomide exposure alone in the absence of JNK knockdown did not have a significant impact on cell viability, the proportion of dead cells was substantially increased when cells were exposed to temozolomide after JNK knockdown (Fig. 4B–E). In line with the results of the cell death assay, JNK knockdown cells formed apparently less colonies after temozolomide exposure in the colony formation assay, in contrast to the control cells which formed colonies quite efficiently irrespective of temozolomide exposure (Fig. 4F and G). In conjunction with the results of the analyses using SP600125, these results demonstrate that JNK plays a critical role in the maintenance of the MGMT expression and temozolomide resistance of stem-like glioblastoma cells.

We have demonstrated in this study that JNK plays a role in the control of MGMT expression in stem-like glioblastoma cells, but the molecular pathway connecting JNK to MGMT expression remains to be determined. Although MGMT could be regulated at the protein level as exemplified by STAT3-mediated regulation of MGMT (29), our data clearly indicate that JNK regulation of MGMT expression occurs at the mRNA level, suggesting that JNK likely contributes to MGMT expression through promotion of its transcription. To date, a number of transcription factors and complexes, such as Sp1, AP-1, c-Myc, HIF1-α, c-Myb, and NF-κB, have been reported to directly bind and activate the MGMT gene promoter (20,21,30–33). Among these factors and complexes, Sp1 and c-Myc, let alone AP-1 which is a jun/fos heterodimer, may be of particular interest in that they are direct targets of JNK-mediated phosphorylation and activation. Earlier reports indicated that JNK maintains the stability of the Sp1 protein through phosphorylation at Thr278/739 (34,35). Another report demonstrated that JNK enhances the pro-apoptotic activity of c-Myc through phosphorylation at Ser62/71 (36). Whether and how JNK is connected with those and other transcription factors/complexes, either directly or indirectly, is an intriguing issue that still needs to be addressed.

In conclusion, we have demonstrated in this study that JNK contributes to the MGMT expression and temozolomide resistance of stem-like glioblastoma cells. Together with the known critical role of JNK in the maintenance of the stemness of stem-like glioblastoma cells (14,38), our current findings provide a molecular rationale for combining JNK inhibitors with temozolomide to effectively target glioblastoma stem cells. The therapeutic significance of such combination treatment will be tested in future preclinical and clinical studies.

We thank Drs Tomoki Todo and Nobuhito Saito at the University of Tokyo for generously providing us with the TGS01 cells and Dr Tomoko Kagawa for her continuous support/encouragement. This study was supported by Grants-in-Aid for Scientific Research, for Challenging Exploratory Research, and for Young Scientists from the Ministry of Education, Culture, Sports, Science and Technology of Japan, by a Grant-in-Aid from the Global COE Program of the Japan Society for the Promotion of Science, by the National Cancer Center Research and Development Fund (23-A-20), and by a grant from the Japan Brain Foundation. 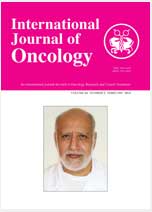