Lung cancer is the leading cause of cancer-related death worldwide (1). In general, lung cancer is histologically classified as non-small cell lung cancer (NSCLC) and small cell lung cancer (SCLC), which account for ~85 and 15% of all lung malignancies, respectively. To overcome this deadly disease, considerable efforts have been made to identify the molecular mechanisms of lung cancer initiation and progression. Especially, the recent advance in comprehensive genome analysis tools revolutionized our understanding of lung cancer molecular biology (2–6). These advances led to the identification of several critical genes for lung cancer. These include the epidermal growth factor receptor (EGFR), Kirsten rat sarcoma viral oncogene homolog (K-RAS), anaplastic lymphoma kinase (ALK), and fibroblast growth factor receptor (FGFR) (6–12). Somatic alterations of these genes, including gene mutations or gene rearrangements, induce protein activation, which subsequently induces the activation of downstream pathways critical for lung cancer cell survival and proliferation. These pathways include the phosphatidylinositol-3-kinase/protein kinase B (PI3K/AKT) and the extracellular signal-regulated kinase (ERK)/mitogen-activated protein kinase (MAPK) pathways. The effects of receptor activation on these downstream pathways have been clearly demonstrated in vitro (13,14). Cancer cells are surrounded by the extracellular matrix, extracellular fluid, and stroma cells. The aforementioned cell-autonomous alterations of the receptors can affect cancer cell biology, but we also speculate that non-cell-autonomous alterations such as ligand concentration in the microenvironment can affect the biology of lung cancer cells.

Recently, fibroblast growth factors (FGFs) and their receptors, FGFRs, attracted the attention of lung cancer researchers, because FGFR somatic activating mutations and gene amplifications have been repeatedly reported in lung cancer (5,15). Moreover, some FGFR inhibitors are reported to be effective in NSCLC (16) and SCLC (17). FGFR activation induces the activation of the downstream PI3K/AKT and MAPK pathways (18,19), promoting lung cancer cell proliferation and inhibiting lung cancer cell apoptosis. FGFs are known to induce the activation of FGFRs, which subsequently induce downstream proteins activation. The FGF family comprises 23 FGFs, and the roles of some FGFs, especially FGF2, have been well studied in the cancer field (20,21). Recently Wilson and colleagues reported that receptor tyrosine kinase (RTK)-driven cancer cell sensitivity to the corresponding RTK inhibitors was affected by the extracellular ligand concentration (22). In this study, they used several ligands, including FGF2 and found that extracellular ligands can reduce cancer cell sensitivity to specific RTK-inhibitors.

The objective of this study was to determine whether extracellular FGFs can affect lung cancer cell biology and to understand how extracellular FGFs affect the biology of NSCLC and SCLC. In this study, out of the 23 reported FGFs, we focused on FGF2, FGF9, and FGF10. FGF2 and FGF10 were chosen because they have been studied in some cancers, including lung cancer (21,23). FGF9 was chosen because we have previously reported that patients with NSCLC with high FGF9 expression present a worse prognosis than patients with low FGF9 expression (24). We also reported that lung specific expression of FGF9 induced the formation of lung adenocarcinoma in a genetically engineered mouse model (25). In this study, we used NSCLC (PC9) and SCLC (H69, H82 and H146) cells. We also examined FGF2 and FGF9 concentrations in the serum of patients with lung cancer.

Evaluation of the proliferation was done using an MTS proliferation assay (CellTiter 96 AQueous One Solution Assay kit, Promega, Madison, WI, USA). The MTS proliferation assay was conducted according to the manufacturer’s protocol. Briefly, 2.0×103 cells were seeded per well in 96-well plates. The cells were then treated with or without FGF2 (100 ng/ml), FGF9 (100 ng/ml), and FGF10 (100 ng/ml). Control cells were treated with the same concentration of the vehicle, dimethyl sulfoxide (DMSO). Seventy-two hours after treatment, the number of viable cells was measured.

Proteins were extracted using a cell lysis buffer (Cell Signaling Technologies). Protein concentrations were quantified by BCA protein assay (Thermo Scientific, Waltham, MA, USA) and equal amounts of protein were denatured and reduced with sample buffer. After boiling, aliquots of the samples were subjected to electrophoresis. The fractionated proteins were transferred to polyvinylidene difluoride (PVDF) membranes. The membrane was incubated with the diluted primary antibodies followed by incubation with the secondary antibodies. For the protein detection, the membrane was incubated with agitation in LumiGLO reagent and peroxide (Cell Signaling Technologies) and exposed to X-ray film.

PC9 cells were seeded in 6-well plates at 100,000 cells per well for flow cytometric analysis using Gallios (Beckman Coulter, Brea, CA, USA). The cells were then treated with or without erlotinib at 1 μmol/l for 48 h. As a control, cells were treated with the same concentration of DMSO. We analyzed the cell apoptotic status using TACS Annexin V-FITC (R&D Systems, Minneapolis, MN, USA) according to the manufacturer’s protocol.

All human samples were obtained with written informed consent. This study was reviewed and approved by the Institutional Review Board of Keio University School of Medicine. Fifteen patients with lung cancer and 8 patients with other lung disease, including infectious lung disease, interstitial lung disease and chronic obstructive pulmonary disease (COPD) were included in this study. All serum samples were obtained before chemotherapy. FGF2 and FGF9 concentrations were measured using enzyme-linked immunosorbent assay (ELISA). FGF2 and FGF9 ELISA were purchased from R&D Systems and Ray Biotech Inc. (Norcross, GA, USA), respectively.

All p-values are two-sided. Student’s t-test was used for comparison in this study. The p-values <0.05 were considered statistically significant.

To investigate whether extracellular FGFs can affect the sensitivity of cancer cells to anticancer drugs, we performed the MTS proliferation assay with or without several anticancer drugs. For SCLC cells, we used etoposide and docetaxel. However, the three FGFs did not affect H69, H82, and H146 sensitivity to these drugs (data not shown).

As previously described, PC9 cells are sensitive to EGFR tyrosine kinase inhibitors, such as gefitinib and erlotinib. In our study, we used erlotinib. Erlotinib alone inhibited PC9 cell proliferation as previously described. FGF2 and FGF9 induced a significant resistance to erlotinib in PC9 cells when compared with erlotinib alone, while FGF10 did not (Fig. 3A). FGF2 was more potent in inducing resistance to erlotinib than FGF9. These data indicate that FGFs, especially FGF2, can affect NSCLC cell sensitivity to erlotinib.

To determine how FGFs, especially FGF2, affected erlotinib sensitivity, western blot analysis was performed to assess the effect on downstream pathways. PC9 cells were treated with erlotinib and with or without FGF2. Erlotinib effectively inhibited the phosphorylation of EGFR irrespective of the presence of FGF2. The effect of FGF2 on p-AKT was modest. However, FGF2 induced an increase in p-ERK1/2 in the presence of 0.1, 1.0, and 10 μM erlotinib (Fig. 3B). These data indicate that FGF2 induced erlotinib resistance through activation of the MAPK pathway rather than the PI3K/AKT pathway.

The FGF family include 23 proteins, although only 18 are FGFR ligands (19). The FGFs, which function as FGFR ligands, activate FGFR, which, in turn, phosphorylates the FGFR substrate 2 (FRS2) and recruits growth factor receptor-bound 2 (GRB2), finally resulting in the activation of the MAPK and PI3K/AKT pathways (18). Of all FGFs, FGF2 is the most studied in the cancer field. However, little is known about the roles of other FGFs. In this study, we attempted to determine which FGF among FGF2, FGF9, and FGF10, was the most potent in promoting lung cancer cell proliferation or in inhibiting lung cancer cell apoptosis.

We found that concentration of FGF2 was higher than that of FGF9. The FGF9 serum concentration was below the detectable limit by ELISA assay. Although FGF serum concentrations may not directly reflect FGF concentration in the microenvironment of lung cancer cells, combining the in vitro and human serum results, we speculate that, out of the three FGFs tested, FGF2 is the most potent FGF in promoting proliferation and in inhibiting apoptosis of lung cancer cells. When comparing FGF9 and FGF10, FGF9 is more likely to promote proliferation and inhibit apoptosis than FGF10.

In conclusion, our study demonstrates that FGFs have multiple roles in the biology of lung cancer cells. To thoroughly understand lung cancer cell biology, further studies of not only cell autonomous alterations, but also non-cell autonomous alterations are mandatory. Further studies on the role of extracellular ligands may help us develop novel treatments targeting extracellular ligands. 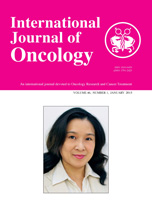