ETS variant 1 (ETV1) is an oncogenic transcription factor. However, its role in colorectal cancer has remained understudied. The present study demonstrated that ETV1 downregulation led to reduced HCT116 colorectal cancer cell growth and clonogenic activity. Furthermore, the ETV1 mRNA levels were enhanced in colorectal tumors and were associated with disease severity. In addition, ETV1 directly bound to Jumonji C domain‑containing (JMJD) 1A, a histone demethylase known to promote colon cancer. ETV1 and JMJD1A, but not a catalytically inactive mutant thereof, cooperated in inducing the matrix metalloproteinase (MMP)1 gene promoter that was similar to the cooperation between ETV1 and another histone demethylase, JMJD2A. RNA‑sequencing revealed multiple potential ETV1 target genes in HCT116 cells, including the FOXQ1 and TBX6 transcription factor genes. Moreover, JMJD1A co‑regulated FOXQ1 and other ETV1 target genes, but not TBX6, whereas JMJD2A downregulation had no impact on FOXQ1 as well as TBX6 transcription. Accordingly, the FOXQ1 gene promoter was stimulated by ETV1 and JMJD1A in a cooperative manner, and both ETV1 and JMJD1A bound to the FOXQ1 promoter. Notably, the overexpression of FOXQ1 partially reversed the growth inhibitory effects of ETV1 ablation on HCT116 cells, whereas TBX6 impaired HCT116 cell growth and may thereby dampen the oncogenic activity of ETV1. The latter also revealed for the first time, to the best of our knowledge, a potential tumor suppressive function of TBX6. Taken together, the present study uncovered a ETV1/JMJD1A‑FOXQ1 axis that may drive colorectal tumorigenesis. 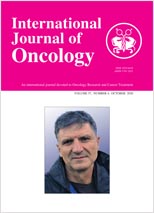