An increased mean platelet volume (MPV) is an early marker of platelet activation. MPV was also shown to be associated with the pathophysiological characteristics of various types of cancer. A previous study demonstrated that MPV was significantly associated with the overall survival (OS) of patients with advanced non-small‑cell lung cancer (NSCLC). However, there has been no analysis of the prognostic effect of MPV on patients with resected NSCLC. The aim of this study was to evaluate the contribution of MPV to the survival of patients with completely resected NSCLC. We retrospectively analyzed 308 consecutive patients with NSCLC who underwent curative resection at Kitano Hospital. The associations between MPV and clinicopathological factors were assessed. We also evaluated the effect of MPV on survival, using the two‑tailed log-rank test and the Cox proportional hazards model. a MPV value of 8.50 fl was considered to be the optimal cut-off value for prognosis. A low MPV was not associated with any other clinicopathological factors. The two-tailed log-rank test demonstrated that patients with a low MPV experienced a shorter disease-free survival (DFS) and overall survival (OS) (P=0.011 and 0.001, respectively), compared to those with a high MPV. The multivariate analysis demonstrated that a low MPV was an independent unfavorable prognostic factor for DFS and OS [hazard ratio (HR)=1.713; 95% confidence interval (CI): 1.070‑2.742, P=0.025; and HR=2.835; 95% CI: 1.304‑6.163, P=0.009, respectively)]. Therefore, we demonstrated that a low MPV predicted an unfavorable prognosis in patients with NSCLC following curative resection.

An increased mean platelet volume (MPV) is an early marker of platelet activation (1). Larger platelets may be more readily stimulated to release chemical mediators; therefore, larger platelets are recognized as being more reactive compared to smaller ones (2). MPV has been found to be increased in patients with various thromboembolic disorders (3, 4). Several studies assessed the prognostic significance of platelet count in patients with non-small-cell lung cancer (NSCLC) (5, 6). Thrombocytosis was noted to predict a poor overall survival (OS). Furthermore, a previous study demonstrated that a low MPV was significantly associated with an inferior OS in patients with advanced NSCLC (7). However, there has been no analysis of the prognostic effect of MPV on patients with resected NSCLC. The purpose of this study was to investigate the effect of MPV on survival in patients with completely resected NSCLC.

We conducted a retrospective analysis of patients diagnosed with NSCLC who underwent surgery at the Tazuke Kofukai Medical Research Institute, Kitano Hospital, between January, 2007 and December, 2011. All the patients met the following criteria: pathological confirmation of NSCLC; complete curative resection; no preoperative treatment; no microscopic residual tumor; no history of transplantation and/or immunosuppression; no evidence of infection, such as pneumonia, prior to surgery; no treatment for concomitant autoimmune diseases with immunosuppressive therapy; no history of hematological malignancy, including malignant lymphoma and leukemia; and availability of laboratory data and follow-up information.

A peripheral venous blood sample was collected from each patient within a month prior to surgery. A blood test was performed using a fully automated blood cell counting system. Histological classification was performed according to the WHO guidelines (8). Disease staging was based on the 7th edition of the TNM classification of malignant tumors (9). Study approval was granted by the Ethics Committee of the Tazuke Kofukai Medical Research Institute, Kitano Hospital.

Association between MPV and clinicopathological factors.

The ROC curve for MPV was used to determine the cut-off values. The area under the curve for MPV was 0.641 [95% confidence interval (CI): 0.562–0.719]. An MPV of 8.50 fl corresponded to the maximum joint sensitivity and specificity on the ROC curve (87.2% sensitivity and 44.1% specificity). The associations between MPV and the clinicopathological factors in this study population are shown in Table I. A low MPV was not found to be significantly associated with any other clinicopathological factor.

Evaluation of the prognostic effect of MPV

Univariate and multivariate analyses of factors associated with prognosis

Prognostic effect of clinicopathological factors on disease-free survival in NSCLC.

Prognostic effect of clinicopathological factors on overall survival in NSCLC.

In this study, we demonstrated that a low MPV was a poor prognostic factor in patients with NSCLC who received curative resection. A low MPV prior to the initiation of treatment was reported to predict a poor prognosis in advanced NSCLC (7). To the best of our knowledge, this is the first study to demonstrate the prognostic effect of MPV on DFS and OS in patients with completely resected NSCLC.

MPV has been considered to reflect platelet activity, as it was shown to be associated with platelet aggregation (11), thromboxane B2 release (12) and increased expression of the platelet adhesion molecule glycoprotein IIb/IIIa (13). Several clinical studies reported that an elevated MPV is associated with thromboembolic diseases, such as myocardial infarction (3) or stroke (4). Recently, the association between MPV and various types of cancer has attracted significant attention. A significant decrease in MPV was demonstrated in various cancer patients with metastasis to the bone marrow compared to control subjects (14). In addition, MPV was found to be decreased in patients with advanced NSCLC (9).

The association between coagulation and cancer may be key to explaining the decrease in MPV. A recent report demonstrated that lung cancer cell-derived microparticles bearing P-selectin and tissue factor activate the circulating platelets, leading to thrombus formation (15). Furthermore, tumor cells release various soluble proinflammatory (i.e., tumor necrosis factor-α and interleukin-1 β) and proangiogenic factors (i.e., vascular endothelial growth factor and basic fibroblast growth factor) (16), which may stimulate the prothrombotic properties of vascular cells. The tendency of larger platelets to react to stimuli causes selective consumption of larger platelets, with a resulting decrease in the MPV of circulating platelets. Mutlu et al (17) analyzed MPV levels in patients with various cancers and found a significant decrease in MPV levels at the time of the thrombotic events compared to those at diagnosis. In 241 patients (78.2%) of the population included in that study, the MPV was below the normal limit, which may support the hypothesis that MPV decreases in patients with NSCLC. Further studies on the association between MPV and cancer-related thrombosis are required.

The effect of platelets on the survival of patients with cancer has been extensively investigated. Platelets have been suggested to play an important role in cancer progression and metastasis (18). A previous study demonstrated that preliminarily activated platelets have tumor-promoting properties (19). Although the number of studies that have investigated the biological association between MPV and cancer progression is limited, recent clinical reports demonstrated the negative effect of a low MPV on the prognosis of cancer patients. Riedl et al (20) evaluated the data of 1,544 patients with various types of cancer and found that high MPV values were associated not only with a decreased risk of venous thromboembolism, but also with an improved patient survival. As for advanced NSCLC, a low MPV prior to the treatment was shown to predict a poor prognosis (7). The present study also demonstrated the negative effect of a low MPV on the DFS and OS of NSCLC patients who received complete resection, even subtracting the effects of adjuvant chemotherapy, which supports the findings of previous studies. However, these results should be verified in a prospective study with a larger sample size.

In this study, we demonstrated that a low MPV prior to surgery was an independent unfavorable prognostic factor in patients who underwent complete resection of NSCLC. MPV, available in a routine complete blood count examination, may represent one of the easiest measurements to be used as a prognostic marker independent of tumor status or lymph node status in NSCLC. Therefore, preoperative MPV may be a useful tool for selecting optimal treatment strategies, including adjuvant chemotherapy. The limitations of the present study include its retrospective design and relatively short follow-up duration. Further investigations are required to elucidate the precise mechanisms through which circulating platelets affect the prognosis of patients with NSCLC. 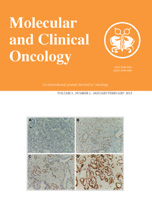