Although nivolumab is administered every two or four weeks, high programmed cell death‑1 (PD‑1) binding of nivolumab on T cells lasting for several months has been reported. A relationship between the PD‑1 occupancy rate on T‑cells and the efficacy of nivolumab is not yet fully understood. The present study used flow cytometric analyses to determine the time‑dependence of PD‑1 occupancy in five patients who discontinued nivolumab. The relationship between PD‑1 occupancy at relapse and the efficacy of re‑challenge was also studied. Occupancies after discontinuation were measured at a total of 32 points. The data indicated that it took 32.4 and 48.9 weeks to decrease occupancy by 50 and 70%, respectively. Subsequently, two patients had recurrence and were re‑challenged with nivolumab. At that time, one patient had 70.8% occupancy while the other had 6.6%. Treatment was effective only for the patient with lower occupancy. Overall, the present study suggests that re‑challenge with nivolumab may be efficacious in patients with low occupancy at recurrence.

Immune checkpoint inhibitors (ICI) targeting programmed cell death-1 (PD-1) have been developed as cancer immunotherapy agents (1,2). Given that PD-1 is an inhibitory immunogenic molecule, the ability of ICI to enhance the immune system allows it to eliminate cancer cells (1,2). Patients treated with nivolumab often expect longer-term survival than would be obtained with conventional chemotherapies, and overall survival curves have been seen to flatten in some clinical trials (3-5). However, extended administration of nivolumab raises concerns of immune-related adverse events (irAEs) and can create financial issues (6,7). Therefore, in some patients, nivolumab may be discontinued for reasons other than disease progression.

Here, we monitored PD-1 occupancy on T cells of five patients who discontinued nivolumab treatment for reasons other than tumor progression and determined the relationship between the level of nivolumab binding at relapse and the efficacy of additional nivolumab therapy.

Between May 2019 and June 2020, peripheral blood samples were collected from patients at Kobe University Hospital who had discontinued nivolumab administration after long-term use. Samples were collected in heparinized tubes. Peripheral blood mononuclear cells (PBMCs) then were isolated by density gradient centrifugation using Ficoll-Paque Plus (GE Healthcare, UK) and SepMate-50 tubes (STEMCELL Technologies, Canada), according to the manufacturer's instructions.

Five patients who discontinued nivolumab treatment for reasons other than tumor progression were investigated (Table I). Patient characteristics are described in Table I. One patient had completed a year of adjuvant nivolumab following surgery. The other four patients with recurrent disease had been treated with nivolumab for 52-104 weeks, but decided to discontinue treatment due to the stable state of their disease and concern over the development of irAEs. All patients underwent computed tomography scans every 3-4 months to monitor tumor growth, during which time no further cancer treatments were done.

[iii] claboratory data at base line;

We monitored the binding of nivolumab to T cells by flow cytometric analysis at 32 different times (6.4 points/patient). Linear regression analysis indicated that it took 32.4 and 48.9 weeks to decrease occupancies by 50 and 70%, respectively (Fig. 1). The individual ratios for each patient are shown in Fig. 2.

Relationship between PD-1 occupancy at relapse and efficacy of retreatment

Patients 4 and 5 had disease recurrence 28 and 45 weeks after their last nivolumab infusion, respectively, at which time treatment was re-initiated. Nivolumab binding at recurrence was 70.8 and 6.6%, respectively (Fig. 2). The flow cytometry plots for patients 4 and 5 are shown in Supplemental Fig. 2. Only treatment of the patient with 6.6% binding was efficacious (Fig. 3). Occupancy in Patient 5 at 4 weeks after re-administration was 68.3% (Fig. 2).

The optimal duration of treatment with nivolumab remains unknown. In a largely community-based phase IIIb/IV study, CheckMate 153(13), the effects of either one-year or continuous treatment were evaluated. An important result was that continuing nivolumab beyond one year improved outcomes (13). On the other hand, the financial burden and irAE occurrence on long-term use of nivolumab should be considered. We note that therapy with another anti-PD-1 antibody, pembrolizumab, was ended after 2 years in most clinical trials (14,15). Nivolumab discontinuation is one strategy that should be considered for patients with prolonged stable disease due to long-term use of nivolumab. Further studies about discontinuation of ICI are ongoing (16).

A few previous studies have examined the binding of nivolumab to PD-1 on T cells after nivolumab discontinuation (11,12). As in our study, Osa et al investigated nivolumab binding on T cells in lung cancer patients and reported that prolonged binding (more than 20 weeks) was maintained (12). Consistent with these reports, several studies have demonstrated prolonged remission in patients after the discontinuation of nivolumab therapy (8,17,18). Accordingly, a correlation may be present between long-term PD-1 occupancy and a prolonged treatment effect (9). In our study, two patients experienced disease recurrence after discontinuation of nivolumab. Patient 4 relapsed 28 weeks after discontinuation, at which point occupancy was 70.8%. This case might therefore suggest that relapse is not associated with a lack of nivolumab. It may instead be due to tumor cells developing resistance to the drug or to changes in the relationship between the cancer and its microenvironment, including immune cells and alterations in genes encoding components of the antigen processing and/or presentation apparatus (e.g., class I MHC, β2-microglobulin) (19,20). In this case, re-administration of nivolumab was not effective. In contrast, patient 5 relapsed 45 weeks after the last dose, displaying only 6.6% occupancy. In such cases, re-administration of nivolumab to increase the level of binding may be a useful strategy. In fact, occupancy quickly increased up to 68.3% at 4 weeks after re-administration.

In addition to occupancy, a number of other factors have been identified as being associated with the effectiveness of nivolumab. One group reported a relationship between metastatic sites and their numbers and the efficacy of ICI in patients with advanced non-small cell lung cancer (21). In their report, patients with brain metastases had shorter overall survival than those without, and a greater number of involved metastatic organs was related with a poorer response to ICIs. In our study, the two patients with recurrence both had a single site of recurrence (Patient 4, adrenal grand; and Patient 5, lymph node), and the relationship between the number of metastases and the effect is not clear. Further studies are needed to reveal other factors.

Our study has some limitations. First, it was a small case series and only two patients received re-administration of nivolumab. Clarifying the relationship between efficacy of re-administration and occupancy rate will require prospective confirmation in larger studies. Second, compared with the serum half-life of nivolumab, occupancy is maintained for an extended period. However, the mechanism underlying the long-term residual binding of nivolumab on T cells is still unclear. Furthermore, factors influencing the fluctuation of binding rate are also unclear. Although two of five patients had reduced renal function in our study, there was no clear difference in the trend in occupancy between these patients and those with normal renal function. Further research into the pharmacokinetics of this agent is required. Third, in patients 4 and 5, because the period between the date of registration and recurrence was short, only five and two measurements were made, respectively. These numbers may be insufficient to clarify the precise trends. We also do not have data on occupancy during nivolumab treatment in all patients. To improve the accuracy of the trend, measurement at additional points would be necessary. Finally, although we believe this measurement method for occupancy is sufficient to show a trend, degree of measurement error will be present, owing to the complicated and multi-process nature of FACS.

In conclusion, nivolumab occupied PD-1 on T cells for an extended period. Re-challenge with nivolumab may provide a good response in patients with lowered occupancy.

Representative example of the flow cytometry gating strategy used to analyze of occupancy rate. Samples were stained with antibodies and analyzed using flow cytometry using the gating strategy shown. Occupancy rate was estimated as the percent of CD3+ T cells stained with anti-human IgG4 after in vitro saturation with isotype control antibody (indicating in vivo binding; A) to that observed after nivolumab saturation; B) showing total available binding sites.

Flow cytometry plots for patients 4 and 5. The gating strategy is described in Fig. S1.

Funding: This research was supported by the Kinki Promotion Network for Clinical Oncology (grant no. 201704).

The present investigation was approved by the Kobe University Hospital Ethics Committee (approval no. 180152) and was conducted in accordance with the Declaration of Helsinki.

All patients provided written informed consent for this investigation and publication of their data. 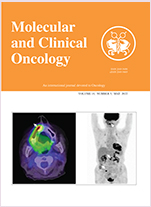