Since Nguyen described the first case of primary non-Hodgkin lymphoma of the extra-hepatic bile duct, only 42 similar cases have been reported in the English literature (5). The present case report described another rare case of non-Hodgkin lymphoma of the common hepatic duct with obstructive jaundice, for which differential diagnosis was complex.

A 61-year-old woman was admitted to the Third Department of Surgery, National and Kapodistrian University of Athens, Attikon University Hospital (Athens, Greece) with a 10-day history of jaundice associated with generalized pruritus, stool discoloration and dark urine, combined with a history of nausea and vomiting. A 5 kg weight loss was reported over the previous 3 months. Her past medical history was significant only for arterial hypertension and she reported no past radiation exposure. Physical examination revealed a non-distended, non-tender, supple abdomen and the patient remained afebrile after the onset of her symptoms. Laboratory tests indicated elevated total and direct bilirubin levels of 9.95 mg/dl (normal value, <1.2 mg/dl) and 9.53 mg/dl (normal value, <0.2 mg/dl), respectively; AST of 80 U/l (normal value, <32 U/l); ALT of 81 U/l (normal value, <33 U/l); alkaline phosphatase of 298 U/l (normal values, 35-104 U/l); γ-glutamyl transferase of 232 U/l (normal values, 5-36 U/l); lactate hydrogenase of 180 U/l (normal values, 135-225 U/l); and complete blood count within normal values. Tumor markers demonstrated a CA 19-9 of 24.9 U/ml (normal value, <27 U/ml), with normal α-fetoprotein levels of 1.6 ng/ml (normal value, <7 ng/ml) and carcinoembryonic antigen levels of 2.1 ng/ml (normal value, <3.8 ng/ml). The serology results for hepatitis B and C were negative. An abdominal ultrasound (US) performed before admission indicated a 9.8 mm dilatation of the intra-hepatic ducts and the common hepatic duct. Abdominal computerized tomography (CT), also performed before admission, indicated dilatation of the common hepatic duct, and of the intra- and extra-hepatic ducts, and a mass situated in the liver hilum (Fig. 1, Fig. 2 and Fig. 3), as well as a 4x3 cm round mass in the left adrenal gland, with features indicative of probable adenoma.

On admission, magnetic resonance cholangiopancreatography revealed an obstructing mass measuring 3.5x3 cm in the liver hilum, probably emerging along the extra-hepatic course of the common hepatic duct, with possible extension within the gallbladder and causing dilatation of the intra-hepatic ducts through common hepatic duct compression. The peripheral part of the common hepatic duct, the pancreatic duct and the pancreas appeared to be normal. A small (11 mm) lesion in segment VII of the liver was also identified, which was considered a possible metastatic lesion. The left adrenal mass was confirmed to measure 4x3 cm and to be an adenoma.

The case was then discussed during the tumor board meeting and a biopsy from the hilar mass was requested before further treatment for extra-hepatic cholangiocarcinoma. Endoscopic US was performed to meet this goal and showed an endoluminal obstructing mass in the common hepatic duct, causing central duct dilatation and enlarged lymph nodes of the liver hilum, thus raising suspicion for lymphoproliferative disorder. Fine needle aspiration from the mass was subsequently performed, and cytological analysis revealed a high-grade lymphoproliferative disease, without evidence of adenocarcinoma cells. However, the specimen was not adequate to enable a definite diagnosis. To further identify the disease and investigate the possibility of a lymphoma mimicking a Klatskin tumor, a bone marrow biopsy was performed, which showed reactive changes from the B and T cell series with the presence of two lymphoid aggregates consisting of both small CD3+ T cells and CD20+ B cells (B=T).

The revised International Prognostic Index (R-IPI) score (8) for this patient was 2, indicating a good prognosis and an estimated overall survival of 79%. Therefore, after the diagnosis of primary non-Hodgkin lymphoma of the common hepatic duct was reached, chemotherapy with cyclophosphamide, doxorubicin, vincristine and prednisolone in conjunction with the anti-CD20 monoclonal antibody rituximab (R-CHOP regimen) was scheduled. The patient was in good health 8 months after the diagnosis, without recurrence of the cholestatic phenomena.

Non-Hodgkin lymphoma is found in only 1-2% of all malignant biliary obstruction cases in adults worldwide (9). Because of its rarity, it is not usually considered in the differential diagnosis for patients presenting with jaundice (10). Its presentation with obstructive jaundice is mainly due to compression of the extra-hepatic ducts by periportal, perihepatic or peripancreatic lymphadenopathy (11,12). Primary non-Hodgkin lymphoma of the extra-hepatic bile duct is very rare. According to a review of the English literature, since the first case was reported by Nguyen (2) in 1982, a total of 43 total cases have been described, including the present report. In 2007, Odemiş et al (13) reported an incidence of primary biliary non-Hodgkin lymphoma in patients with malignant cholangiocarcinoma of 0.6%, accounting for 0.016% of all cases of non-Hodgkin lymphoma globally.

Hepatitis B virus, hepatitis C virus, HIV, Epstein Barr virus, elevated lactate hydrogenase levels or low immunity have been associated with the development of primary biliary non-Hodgkin lymphoma (1,14,15). The clinical manifestations are jaundice, fever, abdominal pain, weight loss and the presence of an abdominal mass. Diagnosing a primary lymphoma of the extra-hepatic duct is difficult through CT, MRI or magnetic resonance cholangiopancreatography because, in most cases, the associated clinical and radiological features closely resemble those of cholangiocarcinoma. Therefore, tissue biopsy is required; however, preoperative histological diagnosis remains a major challenge, particularly in lesions of the hepatic hilum.

In adults, Klatskin tumor, malignant lymph nodes (metastatic or primary) and hepatoma are the most likely causes of hilar biliary obstruction. Minimally invasive techniques for verifying the diagnosis include US- or CT-guided biopsy of the tumor mass, and endoscopic brushing in endoscopic retrograde cholangiopancreatography, percutaneous transluminal cholangiography or cholangioscopy in patients with cholangiocarcinoma. The success rate for these techniques varies widely, from 20 to 80% (16). Success with endosonographically guided fine-needle aspiration cytology has previously been reported (16). In the present case report, attempts to perform this technique were unsuccessful, because the tissue obtained was insufficient for a diagnosis. Hence, in some cases, surgery is inevitable to obtain an adequate sample and achieve an accurate diagnosis (17,18).

Because of the rarity of primary biliary non-Hodgkin lymphoma, the treatment options are unclear. However, as soon as a diagnosis is verified, chemotherapy is considered the gold standard treatment. Immunochemotherapy with doxorubicin, rituximab plus cyclophosphamide, vincristine and prednisone (R-CHOP) is generally used (3,19). The original IPI was developed and validated before the addition of rituximab to curative anthracycline-based chemotherapy (20). Clinical trials (15-18) have confirmed that rituximab can improve the survival of patients with diffuse large B-cell lymphoma.

The R-IPI score was developed to predict the outcomes of individuals receiving rituximab with chemotherapy. The score can differentiate patients into three groups (very good, good or poor); at present, all of these groups have a survival rate of >50% (21). Although it remains unclear as to whether chemotherapy should be administered prior to biliary drainage in patients with non-Hodgkin lymphoma presenting with jaundice, chemotherapy alone usually alleviates obstructive jaundice without the need for biliary drainage (22). Dudgeon and Brower (22) described five cases of patients with non-Hodgkin lymphoma causing obstructive jaundice that were treated with combined chemotherapy without prior surgical or endoscopic biliary decompression or radiation therapy. The therapy rapidly alleviated the jaundice in all patients and had acceptable toxic side effects; notably, all five patients achieved remission (22). In some patients, radiotherapy is helpful and can also be used to treat patients with residual disease after the primary chemotherapy or to relieve pain. Nevertheless, whether radiation therapy is an essential treatment remains to be further explored, because of the scarcity of cases of the disease (10). Moreover, studies on the prognostic implications of primary biliary non-Hodgkin lymphoma are lacking.

In conclusion, the present case report described a rare case of primary non-Hodgkin lymphoma of the common hepatic duct. Although it is difficult to diagnose preoperatively, primary biliary non-Hodgkin lymphoma should be considered in the differential diagnosis for obstructive jaundice. The clinical and radiological findings resemble those of cholangiocarcinoma; therefore, preoperative diagnosis is quite challenging, owing to nonspecific clinical manifestations, laboratory profiles and imaging findings. Because misdiagnosis could lead to inappropriate treatment, tissue biopsy is mandatory. Although surgery is essential for accurate histological diagnosis and local tumor control, multidisciplinary therapy, including systemic chemotherapy, may be necessary to improve the prognosis associated with this disease.

The patient provided written informed consent for the publication of the data and accompanying images. 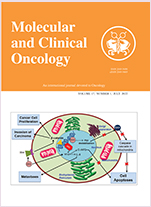