Uncommon and atypical meningiomas and imaging variants: A report of 7 cases

Meningiomas constitute the most common extra‑axial tumor of the central nervous system and can have a wide‑ranging manifestation of imaging. There are several types of unusual depictions depicted with the magnetic resonance imaging (MRI) of meningiomas that have been established thus far. It is thus crucial for the reporting radiologist or neurosurgeon to have an in‑depth knowledge of their variable manifestations in order to be able to differentiate these neoplasms from the numerous tumors that can mimic their appearance. Meningioma is frequently challenging to diagnose when imaging variants are present. Nevertheless, a number of unusual histological variants have imaging or clinical features which are related to typical meningiomas and, in numerous cases, these require specific surgical management. The present study describes 7 cases of meningiomas, which were either simple atypical, unusual gigantic extracranial intracranial parasagittal, or not visible meningiomas. These uncommon and atypical imaging variants of meningiomas are described herein in an aim to underline their various potential presentations.

Meningiomas are non-glial tumors of the central nervous system (CNS), accounting for ~37.6% of all intracranial tumors (1). There is a wide variety of symptoms in cases of symptomatic meningiomas, arising from the compression of nearby structures, straight attacks on or immediate changes in the brain, or due to the barrier of cerebrospinal fluid pathways or vessels (2).

Meningiomas are neoplasms that commonly occur in the brain and spine. Specifically, when occurring in the brain, there are meningothelial cell neoplasms, which commonly attach to the inner side of the dura matter (3).

The most common anatomical locations of meningiomas are falcine (18-22%), convexity (20-34%) and parasagittal (3). Ectopic meningiomas in the sphenoid and middle cranial fossa are more uncommon, and the majority of these occur in the skull of the head and neck area. Other much rarer locations involve the mediastinum, retroperitoneum, lungs, pelvis and extremities (3). Magnetic resonance imaging (MRI) is the diagnostic tool of choice for the study of meningiomas, given its higher contrast differentiation and its general ability to distinguish between intra- and extra-axial lesions (4).

Although the exact diagnosis of meningiomas with standard MRI imaging is, in most cases, easily established, there are unusual depictions of which make the diagnosis challenging. Furthermore, several other malignant and non-malignant neoplasms may mimic meningiomas. Thus, imaging findings can be variable. Intra-diploic meningiomas can exhibit both osteoblastic and osteolytic lesions; thus, possible differential diagnoses on computed tomography (CT) and MRI include fibrous dysplasia metastasis, osteosarcoma and intraosseous hemangioma (5).

In this context, the present study aimed to provide the radiologist or neurosurgeon with a better view of their various potential manifestations in order to be able to distinguish these tumors from the numerous lesions that can imitate their presentation and, thus, ameliorate the surgical planning. The present study describes 7 cases of different types of meningiomas. All the presented lesions had a histological diagnosis of meningioma. Differential diagnoses needs be tailored to the tumor sites and imaging data, although it can mainly include hypervascular tumors.

A 67-year-old, previously healthy male patient, complained of an unsteady left-sided upper and lower motor weakness that began 2 weeks before presentation to the Animus Kyanos Stavros Hospital (Larisa, Greece). An MRI of the brain revealed (Fig. 1) an extra-axial mixed iso-intensity and hyperintensity mass on the right celebral convexity.

Case 2. A 35-year-old male patient was admitted to the Animus Kyanos Stavros Hospital, with a complaint of a 3-month history of left-sided hemiparesis. An MRI (Fig. 2) highlighted a lesion where, before contrast administration was observed, there was iso-intensity to slight hypointensity relative to grey matter, and a post-contrast T1-weighted image identified an extra-axial mass on the right cerebral convexity. The mass exhibited an avid, homogeneous enhancement with occasional areas of central necrosis and with the dural tail sign.

Case 3. A 45-year-old male patient, at 1 month following a head injury, upon a routine examination with an MRI at the Animus Kyanos Stavros Hospital, was found to have a small meningioma. In an (A and B) axial diffusion-weighted image and the corresponding apparent diffusion coefficient map, no restriction in diffusion or facilitation on the lesion were observed. An axial T1-weighted image (E) before contrast administration in axial (G) and coronal (F) T2-weighted images, and in an axial T2 FLAIR-weighted image (D) and FSPGR with no contrast (C), revealed an enlargement of the meninga. Following intravenous contrast administration, an axial T1-weighted image post-contrast (I) and FSPGR post-contrast (H) revealed a small, well-circumscribed, extra-axial mass on the left cerebral convexity. The tumor presented with homogeneous hyperintensity compared with the gray matter (Fig. 3).

A 67-year old female patient with a known extensive lesion was admitted to the Animus Kyanos Stavros Hospital, due to a deterioration of right-sided hemiparesis. The lesion had been recognized for several years, and the patient had been in a good clinical condition and had not reported any issues related to it. However, the findings of the neurological examination did not reveal any notable findings, apart from mild right hemiparesis. An MRI revealed a mass lesion wherein the sagittal T1-weighted image before contrast administration was observed to be iso-intensity to slight hypo-intensity relative to grey matter (Fig. 4) In sagittal post-contrast T1-weighted image meningioma demonstrated an avid, homogeneous enhancement with occasional areas of central necrosis and calcification that were not enhanced, and with the dural tail sign. In the coronal post-contrast T1-weighted image, an avid, homogeneous enhancement was also observed, with occasional areas of central necrosis and calcification. The T2-weighted image demonstrated iso-intensity to slight hyperintensity relative to grey matter and in the axial FLAIR T2, the weighted image in which the meningioma was relatively hypertense to the brain and peritumoral brain edema was observed. An axial diffusion-weighted image and the corresponding apparent diffusion coefficient map revealed no restriction in diffusion or facilitation in the tumor.

Case 5. A 48-year-old male was admitted to the Animus Kyanos Stavros Hospital, with a progressive headache that had been present for 2 months. The axial bone window CT image revealed the direct tumor infiltration of bone and periosteal hypervascularity, resulting in benign bone development and a hyperdensity on a non-contrast CT scan (Fig. 5).

A 33-year-old male patient was referred to the Animus Kyanos Stavros Hospital, by an internal medicine specialist due to a chronic headache. CT images (Fig. 7) revealed a moderately high-density tumor with a notable homogeneous enhancement. An MRI (Fig. 7) revealed a poorly defined tumor on the right cerebral convexity with a mildly hyperintense lesion.

Meningiomas are the most frequent type of brain tumor, accounting for 37.6% of primary brain tumors, with an adjusted yearly incidence of ~8.3 per 100,000 individuals in the USA (1,6). Although multiple risk factors have been identified, the majority of meningiomas develop spontaneously and are of unknown etiology (7). According to the World Health Organization (WHO) classification of the tumors of the CNS, meningiomas can be classified into various subtypes. Specifically, they are divided into grades I, II and III according to their histological characteristics (8). Moreover, the majority of meningiomas are slow-growing benign lesions, although a few exhibit a rapid growth (9).

Meningiomas can be detected on any of the exterior surfaces of the brain and also within the ventricular system, and they originate from the stromal arachnoid cells of the choroid plexus (4). They are the second most common mass lesion of the cerebellopontine angle and can spread through foramina in the skull base (4). Other locations include the optic nerve sheath (0.4-1.3% of cases), the choroid plexus (0.5-3% of cases), the sella turcica, and rarely, outside of the dura with extracalvarial, calvarial, or both calvarial and extracalvarial extension, affecting the temporal bone, mediastinum, mandible and lungs, due to the trapping of the meningocytes or arachnoid cap cells during head trauma (4).

Meningiomas arise from arachnoid meningothelial cells. Intracranially, they are extra-axial masses that typically exhibit iso- to hypointensity on T1-weighted, and iso- to hyper-intensity on T2-weighted images of the cortex, demonstrating avid and often homogeneous post-contrast enhancement. Moreover, there is a strong enhancement that is typically observed following contrast administration (11).

On diffusion-weighted images as well, meningiomas can exhibit various intensities; thus, apparent diffusion coefficient values may differ significantly and may show no diffusion restraint as compared to the brain tissue (12).

Hyperostosis in the underlying bones, dural tails, calcification and linear internal flow voids are also frequently observed in meningiomas. More specifically, the dural tail sign does not represent a specific finding, as it can also be present in some metastases, glial tumors and lymphomas, and the latter are not typically associated with a dural tail to distinguish meningioma from schwannoma in the cerebellopontine angle (13,14).

Peritumoral brain edema can develop when a meningioma becomes large (15). The common MRI signal intensity features comprise an iso-intensity to modest hypointensity T1-weighted sequence in comparison to grey matter and iso-intensity to slight hyper-intensity on the T2 sequence. Following contrast administration, meningiomas traditionally present with avid, homogeneous enhancement with intermittent areas of central necrosis or calcification. Contrast can help to identify en plaque meningiomas. Calcification is typically best demonstrated on a CT scan and an MRI. The dural tail sign is pathognomonic of meningiomas (16).

Meningiomas may lead to changes in bone, which include osteolysis and hyperostosis, and are described in 20% of cases, with the latter being the most common and with the en plaque form. An enlargement of the skull base foramina can also be present (13).

Imaging with a CT scan can achieve a good depiction of the changes in bone associated with meningiomas, which may be appreciated on an MRI as well. Hyperostosis is the benign bone development of the direct tumor attachment to the bone and reactive hyper-vascularity of the periosteum. In 59% of cases, it may be difficult to discriminate against the hyperostosis of en plaque from the primary intraosseous meningioma, which is osteoblastic and may be associated with underlying homogeneous dural enhancement (17,18). The lack of contrast makes meningioma less obvious than other lesions on MRI. The majority of tumors may be identified due to their effects (displacement and edema) on the adjacent brain. Diagnostic issues arise when the meningiomas are small and have a minimal mass effect and minimal or no edema. In these cases, careful attention is required to identify the subtle anatomic distortion and to proceed to intravenous contrast administration, which is the key to correct diagnosis (19).

In multiple myeloma (MM), the accumulation of plasma cells in the CNS or dura is rare. The intracranial manifestation of MM includes either a diffuse leptomeningeal attachment or, less often, a single tumor. The involvement of leptomeninges can be observed as a diffuse enhancement, similar to meningitis, or as focal masses, mimicking meningiomas (20). Epidural involvement can also be observed. Several cases of MM with myelomatous meningeal participation have been described (21,22). The advanced stage of MM, along with circulating plasma cells, indicated that malignant cells spread to the meninges through a hematogenous route. Inappropriately, imaging analyses are often nonspecific, and the differential diagnosis includes carcinomatosis, metastasis, plasmacytoma, dural granulocytic sarcoma and meningitis (23).

In conclusion, the present study provided some examples of types of meningiomas with wide-range potential manifestations and imaging variants where the diagnosis is often challenging. Thus, the reporting radiologist or neurosurgeon needs to be aware of their alternative presences to differentiate these tumors from others that can imitate their appearance.

GF and EL conceptualized the study. VT, GF and EL advised on patient care and medical treatment, and wrote and prepared the draft of the manuscript. AAF, PS, NT, PP, KT, VEG, SC, NM and DAS analyzed the patient data and provided critical revisions. GF and EL confirm the authenticity of all the data. All authors contributed to manuscript revision, and have read and approved the final version of the manuscript.

Written informed was obtained from all included patients.

Written informed was obtained from the patients for the publication of their data and any accompanying images. 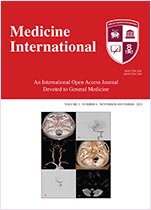