Identification of a new protein biomarker for colorectal cancer diagnosis

As one of the most common cancers, colorectal cancer (CRC) is a major public health issue worldwide. Thus, the identification of novel biomarkers to aid in the early diagnosis of CRC is crucial. The aim of the present study was to identify a novel protein biomarker for CRC, and to identify its structure. In this study, a total of 99 serum samples from 73 CRC patients and 26 healthy controls were collected and analyzed by SELDI-TOF-MS. The biomarkers were separated using HPLC and detected with MALDI-TOF-MS. The qualified peaks were ranked by p-value of non-parametric tests and the top 10 peaks displaying significant differences were selected. Among the 10 protein biomarkers, the concentration of a 3.9‑kDa protein in the serum of the CRC patients was much lower than that in the healthy controls. Therefore, the 3.9‑kDa protein was selected as a biomarker for CRC and its separation and purification were performed. The structure of the 3.9-kDa protein biomarker was determined by LC-MS/MS, and was confirmed to be a fragment of serine/theonine kinase 4 (MST1/STK4). The 3.9‑kDa protein biomarker had high sensitivity and specificity for CRC, and its potential clinical application warrants further investigation.

Colorectal cancer is the third most frequently diagnosed cancer in males and the second most commonly diagnosed cancer in females, with over 1.2 million new cases and 608,700 deaths estimated to have occurred in 2008 worldwide (1). Early detection is essential for the successful diagnosis and treatment of CRC as well as for increasing the survival rate of CRC patients (2–4). Unfortunately, there are no significant clinical symptoms at an early stage making it difficult to provide effective diagnostic proposals for CRC patients (5). The existing diagnostic methods for CRC include fecal occult blood test, colonoscopy and carcinoembryonic antigen, but their sensitivity and accuracy is inadequate (6–9). Therefore, it is essential to identify novel serum biomarkers for CRC with high sensitivity and specificity.

Surface-enhanced laser desorption/ionization time-of-flight mass spectrometry (SELDI-TOF-MS) and matrix-assisted laser desorption/ionization time-of-flight mass spectrometry (MALDI-TOF-MS) are high throughput techniques for the analysis of complex biological specimens with high sensitivity and specificity (10,11). SELDI-TOF-MS combined with ProteinChip technology has been used to identify novel biomarkers for CRC, breast cancer, thyroid cancer, endometriosis and other diseases (12–16). This technology can detect biomarkers in serum samples effectively, but it can only obtain the molecular weight data of biomarkers without protein sequences. In the present study, several technologies were combined to purify and identify a CRC-related protein. The SELDI-TOF-MS combined with ProteinChip technology was first used to detect the 3.9-kDa protein in serum samples. HPLC and MALDI-TOF-MS were then applied to purify and track the 3.9-kDa protein, which provided a pure 3.9-kDa protein biomarker. Liquid chromatography/mass spectometry (LC-MS/MS) was finally adopted to identify and decode the structural information of the 3.9-kDa protein biomarker.

All serum specimens were thawed on ice and centrifuged at 10,000 rpm for 4 min at 4°C. An amount of 5 μl of each supernatant was mixed with 10 μl U9 buffer (9 M Urea, 2% CHAPS, 1% DTT) in a 96-well plate, and then the plate was agitated on a platform shaker for 30 min at 4°C. The U9/serum mixture was further diluted with 185 μl binding buffer (50 mM sodium acetate, pH 4.0). At the same time, the weak cation exchange (CM10) chips were activated by adding 200 μl binding buffer and agitated for 5 min twice. A 100 μl of diluted serum sample was added into each well of the activated Prochip arrays and agitated for 60 min. The chips were washed three times with 200 μl binding buffer and twice with 200 μl deionized water. After being air-dried, 1 μl of saturated solution of sinapinic acid in 50% acetonitrile and 0.5% trifluoroacetic acid was added to each well twice. Finally, the chips were detected using the Protein Biological System II (PBS-II), a mass spectrometer reader (Ciphergen Biosystems, USA).

Date were obtained by an average of 100 laser shots with an intensity of 170, a detector sensitivity of 6, a highest mass of 50 kDa and an optimized range of 2–20 kDa. The instrument was calibrated using the all-in-one peptide molecular mass standard before detecting samples.

After baseline subtraction, the spectra intensities of all samples were normalized to the total ion current. Noise was filtered from the spectra, and then markers were detected with an automatic peak detection pass. Peak clusters were completed to cluster the markers in different samples with similar masses, which were defined by a mass window of 0.3% mass error. All the above analysis was performed using ProteinChip software 3.2.

The fraction containing the candidate protein biomarker was in-solution digested following a standard protocol. Briefly, each fraction was dissolved in 25 mM NH4HCO3, and reduced with 10 mM DTT for 1 h at room temperature, alkylated by using 40 mM iodoacetamide in the dark for 1 h at room temperature. Then 40 mM DTT was added to quench the iodacetamide for 30 min at room temperature. An amount of 0.1 μg Trypsin (Promega Corporation, USA) was then added into the sample solution and incubated at 37°C overnight. A total amount of 1 μl formic acid was added to stop the digestion. The digested sample was loaded onto a home-made C18 column (100 mm × 100 μm) packed with Sunchron packing-material (SP-120-3-ODS-A, 3 μm) followed by nano-LC-ESI-MS/MS analysis. The LTQ mass spectrometer was operated in the data-dependent mode, in which the initial MS scan recorded the mass to charge (m/z) ratios of ions over the mass range from 400–2,000 Da, and then the 5 most abundant ions were automatically selected for subsequent collision-activated dissociation. All MS/MS data were searched in a human protein database downloaded from NCBI using the SEQUEST program (Thermo, USA). The p-values were calculated with the SPSS version 11.0 software and a p<0.05 was required for the results to be considered statistically significant.

The data derived from the CRC and the healthy control groups were analyzed. The qualified peaks were ranked by the p-value of the non-parametric tests, and the top 10 peaks with obvious differences were selected and listed in Table I. Results showed that the intensity of the 3.9-kDa peak in the healthy controls (mean intensity value 6127.9) was much higher than that of the CRC patients (mean intensity value 2404.3) (Fig. 1).

Comparison of the protein peak intensities between the CRC patients and the healthy controls.

[i] Groups 0 and 1 represent the healthy control and the CRC patients, respectively.

Purification of the 3.9-kDa biomarker

Identification of the 3.9-kDa biomarker

The purified 3.9-kDa protein was identified by HPLC-ESI-MS/MS, with the data shown in Fig. 3. After trypsin digestion, the protein was divided into several protein segments. After searching the database, two peptide fragments were found including R. DLINEAMDVKL and R. EVDQDDEENSEEDE (Table II). Therefore, the sequence of the 3.9-kDa protein was decoded as DLINEAMDVKLKRQESQQKEVDQDD-EENSEEDE, which is a peptide fragment of serine/theonine kinase 4.

Early diagnosis is important to increase the survival rate for CRC patients. Carcinoembryonic antigen (CEA) and carbohydrate antigen 19-9 (CA19-9) are tumor biomarkers for the diagnosis of CRC (17,18). However, these tumor markers either lack sensitivity or have a poor positive predictive value. Therefore, it is necessary to identify novel biomarkers with high sensitivity and specificity for the accurate diagnosis of CRC.

There are many different types of methods to identify protein biomarkers for various diseases. Two-dimensional polyacrylamide gel electrophoresis (2D-PAGE) has been widely used to identify the differences in protein expression for the identification of useful biomarkers (19). However, this technique has poor reproducibility and limited resolution for proteins with molecular weights less than 20,000 Da. The SELDI-TOF-MS and MALDI-TOF-MS technologies are rapid and have sensitivity and high throughput. They can identify low-molecular-weight proteins, even with a molecular weight less than 20 kDa (20,21). These two technologies have identified a great number of small proteins, and the profiles of such proteins could be used to indicate the presence or absence of a disease with a variety of tumor types (22–25).

The protein biomarkers detected by SELDI-TOF-MS simply are assigned an M/Z value, but no protein name and structural information are provided. In this study, SELDI-TOF-MS combined with CM10 ProteinChip was used to identify the 3.9-kDa protein biomarker for CRC. We applied several biochemical technologies to perform the separation and purification of this biomarker. First, we used WCX-SPE column to enrich the proteins, which can be enriched by a CM10 protein chip. Then, HPLC was applied to separate and purify the 3.9-kDa protein with the eluates and was monitored by MALDI-TOF-MS. Finally, the biomarker was identified and decoded as a peptide fragment of MST1/STK4.

Serine/theonine kinase 4 (MST1/STK4) can phosphorylate H2B at S14 depending upon the cleavage of MST1 by caspase-3 and the phosphorylation is uniquely associated with apoptotic chromatin in humans (26). Researchers have reported that MST1/STK4 is a CRC-related protein according to the results of protein micro-arrays (27,28). It was also observed that the higher expression of MST1/STK4 was associated with an improved survival rate of colon cancer patients (29). Therefore, as a peptide fragment of MST1/STK4, the 3.9-kDa protein in serum is more meaningful for the diagnosis and prognosis for CRC patients.

The authors appreciate the support from the National Natural Science Foundation of China (30901731), the National High Technology Research and Development Program of China (2012AA02A506) and the Fundamental Research Funds for the Central Universities (2012FZA7004). 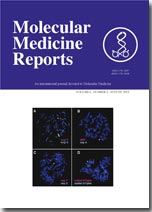