Chronic hepatitis B virus (HBV) infection is a worldwide problem and HBV reactivation following anticancer chemotherapy has become an emerging clinical challenge. However, the mechanisms of HBV reactivation following chemotherapy remain unclear. Epirubicin is an anthracycline drug used in chemotherapy to treat numerous types of malignancy, including breast cancer, acute leukemia, malignant lymphoma, lung cancer, ovarian cancer and stomach cancer. Epirubicin acts by intercalating DNA strands and inhibiting DNA and RNA synthesis. In this study, it was demonstrated that epirubicin directly upregulated the levels of in vitro HBV replication in a concentration‑dependent manner. Exposure to epirubicin for 24 h induced >11- and 6-fold increases in the levels of intracellular and secreted HBV DNA, respectively. In concordance with the elevated levels of HBV DNA, the expression levels of HBV pregenomic RNA, intracellular HBV surface and HBV core antigens, and secreted HBV e antigen were significantly increased by treatment with 0.5 µM epirubicin. Notably, epirubicin promoted cellular excretion of HBV nucleocapsids, which are closely associated with the pathological effects of HBV, including acute liver failure. In conclusion, epirubicin exhibited a direct stimulatory effect on HBV replication and this may be a novel mechanism of HBV reactivation following cytotoxic anticancer chemotherapy.

Hepatitis B virus (HBV) infection is a serious public health problem worldwide, with ~400 million chronic HBV surface antigen (HBsAg) carriers (1). In the majority of patients, the virus is quiescent or replicating at low levels. However, chemotherapy may disrupt the balance between the host immune responses and viral replication, and enhanced viral replication is a universal phenomenon in clinical cases (2).

The mechanisms of HBV reactivation are not completely understood. The majority of studies consider there to be at least two mechanisms responsible for this phenomenon. One is the suppression and reconstitution of the host immune response following chemotherapy, which is pivotal in controlling HBV infection and replication (1). Another is the direct stimulatory effect anticancer agents, including glucocorticoids, may have on viral replication. Corticosteroids increase HBV expression in vitro by binding to the glucocorticoid-responsive element and augmenting the HBV enhancer I (3,4). However, steroid-free chemotherapy may also promote viral replication (5). In certain cases, HBV reactivation occurred within the first two weeks of chemotherapy (6), which was likely to be prior to immune reconstitution following withdrawal of the anticancer agents. One possible mechanism for the early reactivation of HBV is that cytotoxic agents may have a direct stimulatory effect on HBV replication.

In the present study, the aim was to investigate whether epirubicin stimulates HBV replication directly. If this hypothesis is valid, it may be a novel mechanism of the HBV reactivation caused by cytotoxic chemotherapy.

Effects of epirubicin on the viability of HepG2.2.15 and HepG2-HBV1.1 cells by trypan blue exclusion assay

HepG2.2.15 (4×105 cells/well) and HepG2-HBV1.1 (6×105 cells/well) cells were seeded in six-well plates. Following adherence of the cells, epirubicin was added to the medium at various concentrations (0–1 μM) for 24 h, followed by 48 h incubation in a drug-free culture medium. The cells in each well were washed with phosphate-buffered saline twice following the addtion of 200 μl trypsin, and then placed in a 37°C 5% CO2 incubator for 1–2 min. Subsequently 800 μl 10% FBS MEM was added to each well to terminate the reaction, and the cell suspension by pipetting several times to disperse the cells evenly and count the cell number. The viability of cells = live cells/total cells.

HepG2.2.15 (1×105 cells/well) and HepG2-HBV1.1 (1×105 cells/well) cells were inoculated in 96-well plates. Following adherence of the cells, epirubicin was added to the medium at various concentrations (0–1 μM) for 24 h, and then 20 μl 0.5% MTT solution was added to each well for 4 h. Subsequently, the medium in each well was discarded and 150 μl DMSO was added. The plate was agitated for 10 min in order to dissolve the crystals and the absorbance of each well was measured at an optical denisty of 490 nm.

HBV replicative intermediates in the cells were obtained as follows. Cells from one 35-mm diameter dish were lysed with 0.5 ml lysis buffer containing 10 mM Tris-HCl (pH 8.0), 1 mM EDTA, 1% NP-40 and 2% sucrose at 37°C for 10 min. The cell debris and nuclei were removed by centrifugation at 13,000 × g and the supernatant was mixed with 200 μl 35% polyethylene glycol (PEG) 8000 (Beyotime Institute of Biotechnology, Shanghai, China) containing 1.5 M NaCl. Subsequent to incubation on ice for 2 h, the viral nucleocapsids were pelleted by centrifugation at 12,000 xg for 10 min at 4°C, followed by 24 h digestion at 37°C in 400 μl digestion buffer containing 0.5 mg/ml pronase (Takara Bio, Inc., Shiga, Japan), 0.5% sodium dodecyl sulfate (SDS), 10 mM Tris-HCl (pH 8.0) and 10 mM EDTA. The digestion mixture was extracted twice with phenol, and the DNA was precipitated with ethanol and dissolved in Tris-EDTA (10 mM Tris-HCl, pH 8.0, 1 mM EDTA) buffer. In order to collect viral particles instead of free viral DNA in the culture medium, the supernatant was subjected to 35% PEG 8000 precipitation overnight according to the methods of a previous study (8) and then the precipitates were digested as previously described.

The quantification of HBV copies was performed by SYBR-Green assays using FastStart Universal SYBR-Green Master mix (Roche Diagnostics GmbH, Mannheim, Germany). Primers for amplification of the HBV DNA fragments were designed specifically for the conserved region of the HBV gene by Huada Gene Sci-Tech Company (Shenzhen, China) and the sequences were as follows: Forward primer (F2150), 5′-CCTAGTAGTCAGTTATGTCAAC-3′; and reverse primer (R2300), 5′-TCTATAAGCTGGAGGAGTGCGA-3′. The plasmid pneo-CH9/HBV1.1 at different concentrations (5×102, 5×103, 5×104, 5×105, 5×106 and 5×107 copies/μl) served as a template to make the standard curve.

HBV replicative intermediates were extracted from the cells or the supernatant of the culture medium according to the methods previously described and then separated on 0.8% agarose gels. The DNA samples were transferred to nylon membranes (Roche Diagnostics GmbH). Subsequent to ultraviolet crosslinking and prehybridization, the membranes were hybridized with a digoxigenin-labeled HBV-specific probe using a Random-Primed DNA Labeling kit (Roche Diagnostics GmbH). The signal was detected by exposure on an X-ray film and scanning using the Versa Doc Imaging system (Bio-Rad, Hercules, CA, USA).

The levels of HBsAg and HBV e antigen (HBeAg) in the culture medium and cell extracts were assessed by ELISA using Antibody to Hepatitis B Surface Antigen and Antibody to Hepatitis B Virus E Antigen ELISA kits, according to the manufacturer’s instructions (Kehua Biotech Co, Ltd, Shanghai, China). The levels of HBV core antigen (HBcAg) in the culture medium were assessed using an ELISA kit (Disease Diagnosis Reagent and Vaccine Engineering Technology Research Center of China Infectious State, Xiamen University, Xiamen, China). This kit contained two types of 96-well plate. One was coated with HBsAb, to capture only the Dane particle. The other was coated with HBcAb, therefore it detected the total HBcAg from the Dane particles and the HBV nucleocapsids. Each experiment was performed in triplicate and independently repeated three times.

The data are presented as the mean ± standard deviation of at least three independent experiments. Statistical significance was determined by Student’s t-test. The differences between groups were assessed by one-way analysis of variance using the Bonferroni post hoc test and P≤0.05 was considered to indicate a statistically significant difference. All analyses were performed using the Statistical Package for the Social Sciences statistical software for Windows, version 10.1.4 (SPSS, Inc., Chicago, IL, USA).

Epirubicin, as a cytotoxic chemotherapy agent, induces cell apoptosis or necrosis at high concentrations (8,9), which may be associated with HBV replication. The aim of the present study was to investigate whether epirubicin promotes HBV replication at lower concentrations. The cytotoxicity of epirubicin on HepG2.2.15 and HepG2-HBV1.1 cells was examined using trypan blue exclusion and MTT assays. From the results of the two assays (Fig. 1), 0.5 μM epirubicin was revealed to exhibit no significant cytotoxicity to either HepG2.2.15 or HepG2-HBV1.1 cells. Therefore, in subsequent experiments, 0.5 μM served as the working concentration of epirubicin.

HepG2.2.15 (10) and HepG2-HBV1.1 (11) cells were employed as stable HBV-expressing cell lines. HepG2.2.15 (4×105 cells/well) and HepG2-HBV1.1 (6×105 cells/well) cells were treated with epirubicin at various concentrations (0–0.5 μM) for 24 h, followed by 48 h incubation in drug-free culture medium. Intracellular HBV nucleocapsids were extracted at 72 h after drug treatment, and viral replication intermediates were subsequently measured by fluorescent qPCR and Southern blot analysis. The number of HBV DNA copies was concentration-dependently upregulated upon epirubicin stimulation (Fig. 2A). The number of intracellular HBV DNA copies increased 6.35±0.49- and 11.26±1.31-fold in the HepG2.2.15 and HepG2-HBV1.1 cells, respectively, with 0.5 μM epirubicin treatment. Similarly, the concentration-dependent effect of epirubicin on HBV replication in the cells was confirmed by Southern blot analysis (Fig. 2B). The HBV DNA was extracted from the supernatant of the culture medium following precipitation by PEG 8000 and analyzed using qPCR (Fig. 2C) and Southern blotting (Fig. 2D). Epirubicin upregulated the levels of HBV DNA in the supernatant in a concentration-dependent manner. Additionally, 0.5 μM epirubicin increased the secretion of HBV DNA copies by 6.30±0.57- and 6.31±1.17-fold in the HepG2.2.15 and HepG2-HBV1.1 cells, respectively. To further determine the effects of epirubicin on the levels of HBV RNA, the levels of HBV pgRNA were measured by qPCR using primers targeting the 3.5 kb mRNA of the viral genome. The levels of HBV pgRNA increased markedly with epirubicin treatment (Fig. 3).

Epirubicin is one of the most commonly used drugs to treat breast cancer and lymphoma, particularly in patients who have undergone surgery to remove the tumor. Similar to other cytotoxic drugs, epirubicin exhibits immunosuppressive activity, which is considered to be the main mechanism of HBV reactivation. However, there may be other mechanisms responsible for the HBV reactivation caused by cytotoxic anticancer drugs in addition to immunosuppression.

HBV nucleocapsids are closely associated with HBV pathogenesis. The outer layer of HBV nucleocapsids consists of HBcAg, which is the main factor responsible for HBV-associated acute liver failure (ALF). Studies have suggested that HBcAg is able to directly activate B cells to produce specific antibodies (IgG1 and IgM anti-HBc), without the aid of T lymphocytes. This implicates the importance of B cell immunity in the pathogenesis of HBV-associated ALF (18,19). In the present study, epirubicin stimulated stable HBV-expressing cells to excrete HBV nucleocapsids, which may be the principle cause of the severe liver damage induced by cytotoxic anticancer drugs.

It has been confirmed that the recovering immune system following withdrawal of cytotoxic drugs plays a role in liver damage. However, the mechanisms for the marked increase in the levels of HBV replication in the early stages of anticancer treatment remain unclear. In the current study, epirubicin increased the levels of HBV DNA, RNA and protein expression, and directly promoted HBV nucleocapsid secretion under cytotoxic stress. This may be a novel mechanism of HBV reactivation in HBV carriers receiving anticancer chemotherapy. One possible link between cytotoxic stresses and activation of HBV replication is that cell cycle arrest may be induced by cytotoxic drugs (20–22). The present study also demonstrated that the cell cycle was inhibited at the G2/M-phase by epirubicin (data not shown). Further studies are required to confirm these hypotheses. 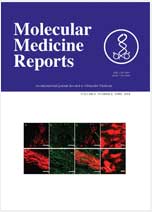