Bladder cancer is one of the causes of cancer‑related death and has a high mortality rate due to its metastatic ability. Naringenin, a bioactive compound predominantly found in citrus fruits, exhibits several cellular functions, including anti‑oxidant, ‑lipidemia and ‑cancer abilities. However, the effects of naringenin on bladder cancer cells are yet to be elucidated. The present study investigated the molecular mechanisms underlying the effects of naringenin on the migration of TSGH‑8301 bladder cancer cells. Treatment with naringenin at doses ranging between 0 and 300 µM over a period of 24 h was found to reduce cell viability. Furthermore, zymography and western blot analysis revealed that naringenin reduced the expression of matrix metalloproteinase (MMP)‑2 in a dose‑dependent manner, and repressed its activity. Naringenin also reduced TSGH‑8301 cell migration in a concentration‑dependent manner, as evidenced by wound healing and Transwell® assays. In addition, naringenin was found to inhibit AKT activity and block the nuclear translocation of nuclear factor κ‑light‑chain‑enhancer of activated B cells. In conclusion, the findings of the present study show that naringenin is capable of inhibiting bladder cancer cell migration through the downregulation of the AKT and MMP‑2 pathways.

Flavonoids, extracted from traditional Chinese herbs, vegetables and fruit, have attracted much attention due to their antitumor activities. Several flavonoids have been shown to inhibit the proliferation and migration of bladder cancer cells, including curcumin, which has been found to induce apoptosis and repress bladder tumor growth in vitro and in vivo (1), and myricetin, which has been shown to arrest T24 bladder cancer cells at G2/M through the downregulation of cyclin B1 and the cyclin-dependent kinase cell division control protein 2 homolog (2). Myricetin also suppresses the migration of bladder cancer cells by decreasing matrix metalloproteinase (MMP)-9 expression (2). Butein has been reported to inhibit the migration and invasion of bladder cancer cells by reducing the expression and activity of extracellular signal-regulated kinase (ERK) 1/2 (3), and epigallocatechin-3-gallate (EGCG) has been shown to induce apoptosis in TSGH-8301 cells through the suppression of AKT activity and the modulation of heat shock protein 27 expression (4). Furthermore, EGCG has been observed to reduce AKT activity, deactivate nuclear factor κ-light-chain-enhancer of activated B cells (NF-κB) and downregulate MMP-9 expression, consequently reducing the migration and invasion of T24 bladder cancer cells (5).

Bladder cancer is one of the most common malignant neoplasms worldwide and is associated with a high mortality rate among urological neoplasms (11). Emerging research has indicated that extracts from traditional herbs exhibit beneficial effects for the treatment of bladder cancer, including pro-apoptotic and anti-migratory effects. However, the effects of naringenin on bladder cancer cells are yet to be elucidated. The present study investigated the molecular mechanisms underlying the effect of naringenin on the migration of TSGH-8301 bladder cancer cells.

Cells were seeded on 24-well plates at a density of 2×104/ml and treated with the indicated concentrations of naringenin for 24 h. Cells were then incubated with fresh medium containing 5.0 g/l MTT at 37°C for an additional 3 h. Subsequent to washing with phosphate-buffered saline (PBS), the purple-blue sediments were dissolved in 1 ml isopropanol and the absorbance was read at 563 nm. The relative proliferation rate was calculated based on the optical density of each sediment at 563 nm compared with the vehicle-treated groups.

For the wound healing experiments, cells were seeded at a density of 1×106/ml. A wound was created by scraping the cell monolayer with a sterilized tip. Following the removal of the detached cells, the cell monolayer was treated with the indicated concentrations of naringenin for 24 h. Migration was assessed by counting the cell numbers in the cell-free region. The value was presented as the mean ± standard deviation (SD) of three independent experiments.

Cells were incubated in serum-free medium and cultured in the presence of the indicated naringenin concentrations for 24 h. Supernatants were then collected and separated using 8% SDS-polyacrylamide gels containing 0.1% gelatin. The gels were washed with washing buffer (2.5% Triton X-100) twice with gentle agitation at room temperature for 30 min, prior to incubation with the reaction buffer [40 mM Tris-HCl (pH 8.0) 10 mM CaCl2 and 0.01% NaN3] for 12 h. The gels were then stained with Coomassie Brilliant Blue R250 and destained. The degraded zones, representing MMP-2 activity, were quantified using a densitometer.

Cells were treated with different concentrations of naringenin for 24 h and seeded at a density of 5×105/ml in the upper chamber of the 48-well Boyden chamber. The lower chamber contained 20% FBS. The chamber was incubated at 37°C for 24 h. Cells that migrated to the lower surface of the membrane were fixed in methanol for 10 min and stained with 10% Giemsa for 1 h. The number of cells was quantified by counting three random microscopic fields (magnification, ×400).

Data are presented as the mean ± SD of three independent experiments and were evaluated using the Student’s t-test with SPSS statistical software (SPSS, Inc., Chicago, IL, USA). A value of P<0.05 was considered to indicate a statistically significant difference.

Naringenin inhibits the expression and activity of migration-related proteins

It is well established that MMP-2 and urokinase-type plasminogen activator play an important role in cancer migration. To investigate whether naringenin modulates the expression and activity of MMP-2, western blot analysis and zymography assays were conducted. Naringenin was found to inhibit MMP-2 activity in a dose-dependent manner, as revealed by zymography assay (Fig. 3A). However, a statistically significant decrease in MMP-2 expression was only observed in the TSGH-8301 cells treated with a high concentration of naringenin (300 μM) (Fig. 3B).

The NF-κB transcription factor regulates numerous genes involved in proliferation, apoptosis and migration upon translocation to the nucleus (12). In the present study, western blot analysis was performed using whole cell or nuclear extracts to assess the effect of naringenin on NF-κB expression and nuclear translocation. As shown in Fig. 4A, naringenin treatment was not found to significantly alter NF-κB expression. However, naringenin treatment was observed to significantly decrease the nuclear translocation of NF-κB in a dose-dependent manner (Fig. 4B).

AKT and mitogen-activated protein kinase (MAPK) signaling, occurring in response to extracellular stimuli, have an important role in cell proliferation and migration. In order to investigate the effect of naringenin on AKT and MAPK activity, western blot analysis was performed. In the presence of 25, 50, 100, 200, 300 mM naringenin, the p-AKT/AKT ratio was 0.94, 0.90, 1.16, 0.69 and 0.66 compared with the vehicle group. Naringenin was observed to significantly decrease AKT activity, as shown by the decreased p-AKT/T-AKT ratio in Fig. 5. However, naringenin was not identified to significantly alter the activity of p38 or ERK (Fig. 5).

Bladder cancer is one of the primary urothelial malignancies, spreading into proximal or distal tissues through migration and invasion into the blood or lymphatic systems and causing high mortality rates. The suppression of migration may enhance the survival rate of patients with bladder cancer. In the present study, naringenin treatment was found to significantly repress the migration of bladder cancer cells through the downregulation of MMP-2 and the inhibition of AKT and NF-κB activities.

It is well established that degradation of the extracellular matrix (ECM) causes metastasis by enabling the spread of cancer cells through blood and lymphatic vessels (13). Levels of MMPs, a family of zinc-dependent ECM endopeptidases, have been shown to be significantly elevated in metastatic human cancers (14). Citrus flavonoids suppress cancer cell migration through the downregulation of MMP expression. Nobiletin, a major bioactive citrus flavonoid, is capable of reducing the MMP-7 proenzyme (proMMP-7) expression by inhibiting the binding of activator protein-1 to the proMMP-7 promoter in colorectal cancer cells (15). In addition, nobiletin exhibits anti-metastatic effects by modulating chemokine receptor-4 and MMP-9 expression in breast cancer cells (16). Consistent with these observations, the present study revealed that naringenin reduced MMP-2 expression and activity, which attenuated the migration of bladder cancer cells. Furthermore, treatment with naringenin significantly reduced the nuclear translocation of NF-κB. The NF-κB transcription factor regulates numerous cellular functions, including adhesion, inflammation and cancer metastasis, by controlling the expression of several genes, such as cyclooxygenase-2 (COX-2), MMP-2 and MMP-9 (17). In the normal state, NF-κB is bound to the cytoplasmic region, but is translocated into the nucleus in response to certain stimuli (17). Inhibiting the function of natural bioactive compounds may be a promising chemotherapeutic strategy (17). A recent study demonstrated that naringenin administration downregulated NDEA-induced NF-κB, COX-2, MMP-2 and MMP-9 expression and inhibited NDEA-induced hepatocellular carcinomas in rats (8). In the present study, naringenin was found to reduce NF-κB nuclear translocation and inhibit MMP-2 expression, subsequently decreasing bladder cancer cell migration.

Phosphorylation-induced AKT activation leads to the phosphorylation of downstream targets, including glycogen synthase kinase-3β, forkhead transcription factors and NF-κB, which in turn mediate the effects of AKT on cell proliferation, apoptosis and migration (18). AKT phosphorylation has been found in several human cancers and correlates with poor prognosis (19). Nobiletin has been shown to attenuate the migration and invasion of gastric adenocarcinomas by downregulating AKT signals (20). Similarly, fisetin exhibits antimetastatic effects by deactivating AKT and reducing MMP-23 expression in PC-3 prostate cancer cells (21). The present study revealed that naringenin inhibited AKT phosphorylation, which suggests that the targeting of AKT phosphorylation may have a role in the anticancer effects of naringenin.

In conclusion, the present study has provided the first evidence, to the best of our knowledge, that naringenin is a novel MMP-2 inhibitor that inhibits bladder cancer cell migration and, thus, may have the potential to suppress bladder cancer metastasis. 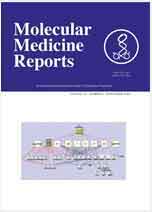