Celecoxib is a potent nonsteroidal anti-inflammatory drug that has demonstrated promise in cancer chemoprevention and treatment. The present study was conducted to gain insight into the molecular mechanism by which celecoxib induces apoptosis in the H22 mouse hepatoma cell line. The effect of celecoxib on the viability of H22 mouse hepatoma cells was assessed with sulforhodamine B assay. Apoptosis and mitochondrial membrane potential were detected by a flow cytometric assay. The protein expression levels of Bax, Bcl‑2, cytochrome c, caspase-3, caspase-9, apoptosis‑inducing factor (AIF), peroxisome proliferator‑activated receptor (PPAR)γ and nuclear factor (NF)-κB were determined by western blot analysis. The data demonstrated that celecoxib reduced the percentage of viable H22 cells in a dose- and time‑dependent manner, which was associated with cell apoptosis. Furthermore, celecoxib induced apoptosis via the loss of the mitochondrial transmembrane potential (ΔΨm), the release of cytochrome c and AIF, and the activation of caspase-9 and caspase-3. Celecoxib also increased the abundance of the pro-apoptotic protein Bax and reduced the levels of the anti‑apoptotic protein Bcl-2. The data demonstrated that celecoxib induced apoptosis in mouse liver cancer cells via the mitochondria-dependent pathway rather than the PPARγ/NF-κB signaling pathway, which indicates that celecoxib may be an effective agent in the clinical management of hepatocellular carcinoma.

Hepatocellular carcinoma (HCC) is the fifth most common type of cancer worldwide and the third most common cause of cancer-related mortality (1). HCC usually occurs in the presence of continuous inflammation and hepatocyte regeneration during chronic hepatitis and cirrhosis; thus, mediators of inflammation are involved in the development of hepatic carcinogenesis (2). Drug treatment is the main therapy for patients in the advanced stages of disease. However, the response rate to traditional chemotherapy for HCC patients is far from satisfactory (3). Therefore, novel and effective pharmacological strategies are urgently required for the treatment of advanced HCC.

The non-steroidal anti-inflammatory drug celecoxib is a member of the cyclooxygenase-2 (COX-2) inhibitor drug family and is a potent and specific inhibitor of human COX-2 (4,5). The anticancer effects of celecoxib have been demonstrated in various different tumor types, including colorectal, lung, breast, prostate and head/neck cancer (6–8). The mechanism underlying the effects of celecoxib may be associated with COX-2-dependent or -independent pathways (9,10). A number of studies have investigated the mechanisms of the anticancer action of celecoxib. Celecoxib and derived compounds have been suggested to induce cell cycle arrest or apoptosis, inhibit tumor growth and suppress tumor neoangiogenesis (11). However, the mechanisms underlying celecoxib treatment of HCC are not yet completely understood.

In recent years, numerous advances in the understanding of HCC have been reported (12). The failure of transformed cells to undergo apoptosis markedly disrupts tissue homeostasis and allows proliferation of the resistant clone, a phenomenon frequently observed in HCC (13). Apoptosis is an evolutionarily conserved programmed mode of cell death and is critical for the sustained tissue homeostasis. Apoptosis signaling is tightly regulated by two main apoptotic pathways, termed the ‘extrinsic pathway’ and the ‘intrinsic pathway’. These pathways involve either cell surface death receptors, or the mitochondria and the endoplasmic reticulum, respectively (14,15). We have previously focused on the effects of celecoxib on the arachidonic acid (AA) signaling pathway in H22 mouse hepatoma cells. The imbalance between AA and prostaglandin (PG)E2, characterized by increased AA at a low dosage of celecoxib and reduced PGE2 at a high dosage of celecoxib, was demonstrated to be a significant indicator of celecoxib-mediated apoptosis in H22 cells (16). The present study was designed to clarify the targeting of the apoptotic pathway by celecoxib and possible interconnections between COX-2 and the peroxisome proliferator-activated receptor (PPAR)γ/nuclear factor (NF)-κB signaling pathway.

Determination of cell viability by a sulforhodamine B (SRB) assay

The cells were seeded in 96-well plates in medium with 10% FBS. Following incubation with celecoxib at concentrations ranging between 25 and 400 μM for 48 h, the cells were fixed with 10% trichloroacetic acid (Sigma Aldrich), and 0.4% (w/v) SRB in 1% acetic acid was added to stain the cells. Unbound SRB was washed away with 1% acetic acid and SRB-bound cells were rendered soluble with 10 mM Trizma base (pH 10.5; Sigma Aldrich). The absorbance was read at a wavelength of 570 nm with a 680 microplate enzyme-linked immunosorbent assay (ELISA) reader (Bio-Rad Laboratories, Hemel Hempstead, UK). Using the following absorbance measurements: Time zero (T0), control growth (C) and cell growth in the presence of the compound (Tx), the percentage growth was calculated at each compound concentration level. Percentage growth inhibition was calculated as: 100-[(Tx-T0)/(C-T0)] × 100. The 50% growth inhibition (IC50) value was determined to be the compound concentration that resulted in a 50% reduction of the total protein increase in the control cells during the compound incubation.

The cells were treated with celecoxib. At 30 min prior to incubation termination, Rhodamine 123 solution (final concentration of 10 μg/ml) was added to the cells and incubated for the final 30 min at 37°C. The cells were harvested and the accumulation of Rhodamine 123 was determined using FACScan flow cytometric analysis.

The data are reported as the mean ± standard error of the mean (n=3 per group). Statistical analysis was performed using the unpaired Student’s t-test and P<0.05 was considered to indicate a statistically significant difference.

In chemically-induced apoptosis, mitochondria are central in the cellular commitment to apoptosis through cytochrome c-dependent or -independent pathways. To elucidate the molecular mechanism of celecoxib-induced apoptosis in H22 cells, the expression levels of proteins associated with apoptosis were examined. H22 cells were exposed to the indicated celecoxib concentrations for 24 h (Fig. 4). The data revealed that celecoxib induced the release of cytochrome c from the mitochondria to the cytosol and AIF from the cytosol to the nucleus in a concentration-dependent manner. Caspase-3 and caspase-9, well-known to be activated downstream of cytochrome c, were also cleaved in a concentration-dependent manner. By contrast, the expression levels of Bcl-2 protein, an anti-apoptotic molecule, were reduced in a concentration-dependent manner. However, celecoxib induced an increase in Bax expression levels; the complementary pro-apoptotic Bax proteins of the Bcl-2-family are essential for the activation of the intrinsic death pathway. These data suggest that celecoxib induced mitochondria-dependent apoptosis through the mitochondria-dependent pathway.

Since PPAR-γ agonists are known to exhibit growth-inhibitory effects in tumor cells, including HCC cell lines, the effect of celecoxib on PPAR-γ expression levels in H22 cells was investigated. In Fig. 5, western blot analysis of PPARγ and NF-κB did not reveal a differential effect on PPARγ and NF-κB expression levels during celecoxib-induced apoptosis, indicating that celecoxib induced apoptosis via the mitochondria-dependent pathway rather than the PPARγ/NF-κB signaling pathway.

Celecoxib may reduce the risk of cancer formation by altering AA metabolism, which has been implicated in the development of cancer. Although the antitumor mechanism of celecoxib is not completely understood, a large number of studies have demonstrated that celecoxib prevents carcinogenesis through inhibition of COX-2 activity and the resulting reduction in PGE2 expression levels (17). In previous studies, the inhibitory effects of low celecoxib doses on hepatoma H22 cells were indicated to be induced by AA released through cPLA2 activity (16). Although celecoxib at low doses induced different changes in the AA metabolism pathway compared with high doses, celecoxib was, to the best of our knowledge, found for the first time to increase the ratio of AA to PGE2 in a dose-dependent manner, correlating with the repressing of cell viability on H22 cells. Therefore, the increased ratio of AA to PGE2 may be an important indicator of celecoxib cytotoxicity and may be used to evaluate antitumor activity (16).

Recently, data have indicated that the effects of celecoxib, a selective COX-2 inhibitor, are COX-2-dependent and -independent in HCC (18,19). The pro-apoptotic effects of celecoxib were first attributed to the inhibitory action of the drug on COX-2. By inhibiting COX-2, celecoxib has been suggested to interfere with prostaglandin-mediated upregulation of anti-apoptotic proteins (20,21). However, a study has demonstrated that celecoxib is able to suppress tumor growth without an apparent involvement of the target protein, COX-2 (22). Important molecular targets of the COX-2-independent celecoxib activity include protein kinase B and its upstream kinase 3-phosphoinositide-dependent kinase-1 (23), cyclin-dependent kinase inhibitors and cyclins, the anti-apoptotic proteins survivin, Bcl-2 and Mcl-1, as well as sarcoplasmic/endoplasmic reticulum calcium ATPase (24,25). Thus, celecoxib acts as a multifunctional drug. Although celecoxib constitutes a prototype of drugs that induce cell death independently from COX-2, inhibition of COX-2 in COX-2-expressing cells may also contribute to the cytotoxic effects of the drug. COX-2 inhibition may be particularly important for the in vivo effects of celecoxib in COX-2-expressing tumors, as COX-inhibition affects prostaglandin-mediated angiogenesis in xenografts and newly formed tumors (26).

Intrinsic apoptotic signaling occurs in response to stimuli such as DNA damage, growth-factor withdrawal and exposure to certain chemotherapeutic agents, which result in the release of cytochrome c and other pro-death factors from the intermembrane spaces of the mitochondria, and subsequent downstream signaling through the initiator caspase-9. The mitochondria are important for apoptosis. With external or internal apoptotic signal stimulation in tumor cells, the mitochondrial membrane permeability changes, and cytochrome c, AIF and other apoptotic factors are released into the cytoplasm. Cytochrome c may result in cell apoptosis following the formation of the apoptosome with Apaf-1 and caspase-9, activating caspase-3, caspase-6 or caspase-7 downstream. The Bcl-2 family proteins, including the anti-apoptotic protein Bcl-2 and pro-apoptotic protein Bax, are important factors that regulate the changes of the mitochondrial membrane permeability, and are important in the mitochondrial apoptotic pathway (27).

PPARγ is a ligand-activated transcription factor with a DNA-binding domain that recognizes response elements in the promoter regions of specific target genes associated with inflammation, cell proliferation, apoptosis and differentiation (28,29). NF-κB is aberrantly activated in tumor cells, contributing an advantage in cellular survival and proliferation (30). The NF-κB activation mechanism in tumor cells is not well-elucidated, but it appears complex and varies in different tumor types. In a previous study, celecoxib upregulated expression of PPARγ and inhibited growth of Lewis cancer cells in a dose-dependent manner (31). Whether increased PPARγ expression levels occurred directly or indirectly due to elevated AA levels remains unclear. However, our recent data has not demonstrated a differential effect on PPARγ and NF-κB expression levels during celecoxib-induced H22 cell apoptosis. The mechanism of celecoxib action appears to vary according to the capacity of the cell type being treated. Celecoxib effects depend not only on the conditions under which it is administered to the cells and the cell type, but also on key pathways, such as COX-2, PPARγ and NF-κB. This highlights the requirement to closely analyze the mechanisms underlying celecoxib action within and among different tumor types.

In conclusion, the results of the present study demonstrate that celecoxib reduced the percentage of viable H22 cells in a dose- and time-dependent manner, which was associated with cell apoptosis. Celecoxib induced apoptosis via the mitochondria-dependent pathway, including through mitochondrial dysfunction, release of AIF and cytochrome c from the mitochondria, and the activation of caspase-9 and caspase-3. Celecoxib also increased the abundance of the pro-apoptotic protein Bax and reduced the levels of the anti-apoptotic protein Bcl-2. Therefore, the data indicate that celecoxib may be an effective therapy in HCC.

The authors would like to thank Dr Zhigang Xu, Dr Qiongshu Li, Miss Huilin Zhen and Mr. Xin Zhang for their help. Funding for this study was provided by the Jilin Science & Technology Development Plan (grant nos. 20090441, 201205006 and 2012747), the Graduate Innovation Fund of Jilin University (grant no. 20121118) and the Opening Project of State Key Laboratory of Supramolecular Structure and Materials of Jilin University (grant nos. SKLSSM 200912 and SKLSSM 201317). 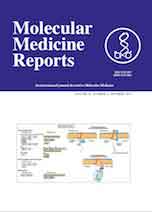