In vivo, ischemia/reperfusion (I/R) injury refers to organ damage produced by the restoration of blood flow after ischemia. Myocardial I/R injury is a common phenomenon that occurs after ischemic heart diseases such as myocardial infarction (MI), or is the result of a reduction in blood flow and oxygen supply insufficiency (1). MI is a cause of morbidity in cardiovascular diseases (2,3). Limiting or reducing the damage following I/R has received extensive research attention. In vitro, an hypoxia/reoxygenation (H/R) injury model simulates in vivo I/R injury (2).

Overexpression of microRNA-101 (miR-101) has been found in cell inflammation injury, and downregulated expression of miR-101 can attenuate cell injury (4,5). miR-101a is upregulated during cell differentiation, and overexpressed miR-101 can inhibit cell proliferation and migration, and promote cell apoptosis (6–8). Thus, it was hypothesized that inhibiting miR-101a-3p could attenuate H/R-induced damage in H9C2 cells.

The differentiation, proliferation and migration of cells is critical in the early stages of cell healing, and apoptosis affects the elimination of inflammatory factors during cell healing (9). A number of studies have investigated cell apoptosis via the Bax/Bcl-2 signaling pathway (10–12). In addition, elevated interleukin-6 (IL-6) levels may cause tissue damage and inflammation (13). Studies have demonstrated that tumor necrosis factor-α (TNF-α) is connected with inflammation and injury (14–17). STAT3, a member of the STAT family of transcription factor, regulates cell proliferation, cellular transformation, metastasis and immune responses, whereas Janus kinase (JAK)2 participates in the immune system and other signaling transductions (18,19). Previous studies have demonstrated that inactivation of the JAK/STAT3 signaling pathway relieved cell injury, suggesting that activation of the JAK/STAT3 signaling pathway was correlated with cell injury (20,21).

In the present study, H9C2 cells (rat myocardial cells) were subjected to H/R treatment and established as an I/R injury model in vitro. The aim of the study was to investigate the effect and mechanism of the inhibition of miR-101a-3p on H/R injury. Cell apoptosis in cardiomyocytes, and critical regulation of target factors by inhibition of miR-101a-3p and H/R injury were also studied.

H9C2 cells were plated in 35-mm culture dish at 1.5×105 cells/dish for 12 h. The cells were transfected with I, IC, M, MC (50 nM; Shanghai GenePharma Co., Ltd.) using riboFECT™ CP Reagent and buffer (Guangzhou RiboBio Co., Ltd.). RiboFECT™ CP-I/IC mixture and DMEM were added to the cells at 37°C and incubated for 48 h. Reverse transcription-quantitative PCR was applied to detect the transfection efficiency of cells. The sequences of I, IC, M, MC were as follows: M (sense, 5′-UACAGUACUGUGAUAACUGAA-3′ and antisense, 5′-CAGUUAUCACAGUACUGUAUU-3′), MC (sense, 5′-UUCUCCGAACGUGUCACGUTT-3′ and antisense, 5′-ACGUGACACGUUCGGAGAATT-3′), I (5′-UUCAGUUAUCACAGUACUGUA-3′) and IC (5′-AUCGUUCGAUCACGUATT-3′).

Cell viability was detected by CCK-8 (MedChemExpress, LLC). The cells were plated in 96-well plates at 1.5×103 cells/well for 24 h. Following transfection and H/R treatment, CCK-8 solution was added into 96-well plates and diluted in phosphate buffered saline (Gibco; Thermo Fisher Scientific, Inc.) at 9:1, and then incubated in a 37°C, 5% CO2 atmosphere for 1 h. Then, the OD value at a wavelength of 450 nm was measured by Multiskan™ FC (Thermo Fisher Scientific, Inc.).

The supernatants (centrifugation at 10,000 × g for 30 min at 4°C) from the control group, H/R group, IC + H/R group and I + H/R group were collected into centrifuge tubes. Creatine kinase (CK) was detected using a CK test kit (cat. no. BC1140; Beijing Solarbio Science & Technology Co., Ltd.) and lactate dehydrogenase (LDH) was analyzed using an LDH test kit (cat. no. TE0159; Beijing Leagene Biotech Co. Ltd.), according to the manufacturers' protocols.

Cell apoptosis was determined via flow cytometry. The cells were suspended in PBS after having been treated for 48 h. Then, 1 µl Annexin V/FITC 5X, 150 µl annexin-binding buffer and 2.5 µl propidium iodide (PI) in a Dead Cell Apoptosis kit (Thermo Fisher Scientific, Inc.) were added to 300 µl cell suspension for conducting flow cytometry at room temperature for 15–20 min in the dark. The fluorescence was detected by a flow cytometer (BD Biosciences) and the cell apoptosis was calculated using BD FACSuite software (version 1.0; BD Biosciences). Apoptosis was calculated as the sum of early apoptosis and late apoptosis.

Effects of I on viability, and the contents of CK and LDH in H/R model H9C2 cells

CK has been reported to be linked to diastolic dysfunction in rats (23), and cardiomyocyte damage can be assessed by detecting the content of LDH (24). The expression levels of CK and LDH increased when the cells were subjected to H/R injury, and such expression was decreased by I transfection during H/R (Fig. 1C and D). The data also demonstrated that H/R decreased H9C2 cell viability, whereas I improved cell viability following H/R (Fig. 1E).

Effects of I on H/R-induced H9C2 cell apoptosis

Effects of I on the expression levels of Bcl-2, Bax, IL-6 and TNF-α in H/R-treated H9C2 cells

AG490 can inhibit the activation of STAT3 and JAK2 (25). A dual luciferase assay identified that I promoted luciferase activity, which was inhibited by M, supporting the hypothesis that I promoted JAK2 expression and M was able to inhibit expression (Fig. 3A,B). The H/R, IC + H/R and MC + H/R groups exhibited lower levels of JAK2 compared with control group (Fig. 3C-E). M inhibited the expression of JAK2, which was found to be upregulated by I in the H/R model. AG490 + M + H/R group was found to have the lowest expression levels of JAK2. In addition, M inhibited the phosphorylation of JAK2, which was significantly promoted by I in comparison (Fig. 3C-E). It was also found that I increased the level of STAT3 in the H/R group, while M decreased the level of STAT3 in the H/R group, and that the AG490 + M + H/R group had the lowest levels of STAT3 (Fig. 3F and G).

The results of the present study demonstrated that I can improve H9C2 cell viability and decrease cell apoptosis during cell H/R injury. As damage of cardiomyocytes gradually intensifies, LDH and CK will be increasingly released from cardiomyocytes (27,28). In the H9C2 cells, H/R caused cardiomyocyte damage, which was attenuated by I.

The Bcl-2 family contains Bcl-2 and Bax, and downregulating the level of Bax and upregulating the level of Bcl-2 can reduce cell apoptosis (29). The Bax/Bcl-2 ratio is regarded as a main factor in determining cell apoptosis, and the majority of studies investigate apoptosis via the Bax/Bcl signaling pathway (30–33). The present study demonstrated that I attenuated H/R-induced apoptosis by decreasing Bax and increasing Bcl-2. IL-6, a pro-inflammatory factor, is rapidly produced in response to tissue injury (34,35). A reduction of IL-6 has beneficial functions in tissues and prevents destructive effects (36), as it can reduce inflammation and prevent further injury (37). Injury causes significant immune dysfunction, and TNF-α is a potent proinflammatory cytokine (38,39). It was revealed in the present study that I could reduce immune dysfunction caused by H/R by decreasing expression of the inflammatory cytokines IL-6 and TNF-α.

Previous studies have demonstrated that the downregulation of p-JAK2 and p-STAT3 can increase cell apoptosis and decrease cell viability (40–42). It has also been reported that proapoptotic factors such as Bax are upregulated in H/R injury-treated cells (3,43). The present study revealed that M could not only inhibit p-JAK2 and p-STAT3, but also inhibit cell viability during H/R, whereas I promoted JAK2 and STAT3 during H/R and increased cell viability. In order to investigate whether the JAK2/STAT3 signaling pathway contributed to the effects of I on H/R damage, AG490 (which inhibits JAK2 and STAT3 during H/R) was used to investigate cell viability during H/R. Notably, AG490 inhibited cell viability during H/R, and AG490 inhibited the p-JAK2/IAK2 and p-STAT3/STAT3 ratios in M-transfected and H/R-treated cells. However, I promoted cell viability, and the p-JAK2/JAK and p-STAT3/STAT3 ratios during H/R. Therefore, it was hypothesized that the levels of JAK2, p-JAK2 and p-STAT3 were important indicators to regulate the effects of miR-101a-3p on H9C2 cells during H/R. However, the present study did not investigate in depth whether the levels of these molecules were of clear importance for H9C2 cells during H/R. In future studies, the effects of the levels of JAK2, p-JAK2 and p-STAT3 on H9C2 cells during H/R should be studied via quantitative analysis. It has been demonstrated that the activation of JAK2 results in phosphorylation of downstream STAT3 signaling pathways (44). However, the role of STAT3 in I-treated cardiomyocytes during H/R, and the association between JAK2 activation and STAT activation during H/R remains unclear and should be determined in future studies.

In conclusion, the present study indicated that downregulation of miR-101a-3p prevented not only H/R-induced damage to cardiomyocytes by decreasing inflammatory responses, but also reduced cell apoptosis during H/R injury via the Bax/Bcl-2 signaling pathway. The present study provided evidence that the JAK2/STAT3 signaling pathway served an important role in decreasing H/R injury in cardiomyocytes following inhibition of miR-101a-3p.

This work was supported by Inner Mongolia Health and Family Planning Commission Class A Item (grant no. 201701072).

The analyzed data sets generated during the study are available from the corresponding author on reasonable request.

JL made substantial contributions to the conception and design of the study. JW, FC and YN contributed to acquisition, analysis and interpretation of data. JL drafted the article and critically revised it for important intellectual content. All authors approved the final version of the manuscript to be published. 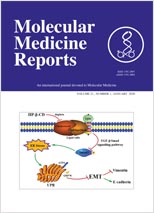