Acute mountain sickness (AMS) is a potentially lethal condition caused by acute hypoxia after ascending to altitudes higher than 2,500 m in a short time. It is common in high-altitude travelers, and may lead to life-threatening high-altitude conditions such as high-altitude cerebral edema (HACE) or high-altitude pulmonary edema (HAPE) (1,2).

Previous studies suggested that hypoxia stress can induce an oxidative stress reaction, which leads to increases in endogenous reactive oxygen species (ROS), and oxidative stress damage, resulting in body damage (3–5). ROS are very active and unstable, and indirectly reflect the level of oxidative stress, as well as the degree of injury through the enzyme activity of superoxide dismutase (SOD), glutathione peroxidase (GSH-Px) and the expression of malondialdehyde (MDA) (6,7).

Previous studies demonstrated that oxidative stress can induce the production of inflammatory factors (8). The presence of inflammatory cells, immunoglobulins and complement components in the broncho-alveolar lavage fluid of patients with HAPE suggests that inflammatory immune responses can lead to increased permeability of the pulmonary blood barrier and are involved in the occurrence of HAPE (9). In addition, key factors such as nuclear factor-κB (NF-κB), interleukin (IL)-1β, IL-6, and tumor necrosis factor-α (TNF-α) serve an important role in the development of exacerbated immune responses, among which IL-1β is an important pro-inflammatory factor (10–13). Activation of the above factors can stimulate the proliferation of vascular smooth muscle cells, which can lead to pulmonary hypertension (14–16). During oxidative stress, vascular endothelial cells can release adhesion factors and monocytes, causing lymphocytes to aggregate into endothelial cells through these two inflammatory factors (17). TNF-α can activate neutrophils, release a large number of oxygen-free radicals and proteases, resulting in tissue damage (18). NF-κB is a transcription regulator. Activation of NF-κB promotes the transcription of cytokines and the activation of inflammatory transmitter gene transcription (19,20). IL-17C is a member of the IL-17 family. Previous studies demonstrated that activated T cells do not synthesize IL-17C (21), and that epithelial cells from various tissues and organs are the main source of IL-17C (22). IL-17C can promote the secretion of IL-1β, IL-6, and TNF-α, activate the NF-κB pathway (23), and induce inflammation and immune regulation (24–26). As research has progressed, microorganisms have been shown to promote the expression of IL-17C in epithelial cells in inflammatory environments (27), yet the role of IL-17C and AMS has not been established.

In the present study, it was hypothesized that oxidative stress and inflammatory reactions induced by hypoxia could serve an important role in the onset and development of AMS. To verify this hypothesis and further explore the underlying regulatory mechanism, an AMS rat model was used to study the role and the mechanism of oxidative stress response and inflammatory factors, such as IL-17C, in the occurrence and development of AMS.

Establishment of the animal model of AMS

A total of 48 male Sprague-Dawley rats weighing 180–220 g and aged 12 weeks were purchased from the Laboratory Animal Center of The Medical Department of Xi'an Jiaotong University [SCXK (Shaanxi) 2018-001], and kept in a specific pathogen-free at 20°C environment. Rats were provided with water and food ad libitum under a 12-h light/dark cycle. Rats were randomly divided into a control group (980 hPa) and simulated acute hypoxic stress groups (475 hPa) for 24, 48 and 72 h (n=12 in each group). The animals in the simulated hypoxia group were placed in a hypobaric oxygen chamber at a simulated altitude of 6,000 m for the aforementioned periods of time. The altitude in the chamber increased at a uniform speed of 10 m/sec. The rats were given free access to standard rodent food and water. Then, 30 mg/kg pentobarbital sodium was injected intraperitoneally to anesthetize the rats. When the breathing of the rat became slow and smooth and muscles were loose, the tissue of both lungs was removed if no traction reflex was observed, and the rat was then decapitated (28). The morphological changes in the right upper lobe lung tissue were detected using hematoxylin and eosin (H&E) staining under light microscopy and transmission electron microscopy. The remaining lung tissues were immediately stored in three cryopreservation tubes and then subjected to transcriptome sequencing and oxidative stress response evaluation (measurement of SOD levels). The levels of MDA, GSH-Px and inflammatory factors (IL-1β, IL-6, IL-17C, NF-κB, and TNF-α) were also assessed. The measures for handling animals involved in the sampling process were implemented in accordance with the National Regulations on the Administration of Laboratory Animals (GB14923-2010; http://www.cmu.edu.cn/sydwb/info/1835/1388.htm). The animal experiment scheme was assessed and approved by the Ethics Committee of School of Medicine of Qinghai University.

Tissue was harvested from the right upper lobe of the lung, then fixed in 4% paraformaldehyde for 4 weeks at 4°C, embedded in paraffin, and sectioned to 5-µm thickness. Lung sections were concurrently stained with H&E (~95 min) for histopathological examination. Images were captured using a light microscope (magnification, ×400).

After dissection, the remaining fresh lung tissues were immersion-fixed in 2.5% glutaraldehyde for 24 h at 4°C. The samples were post-fixed in 1% osmium tetroxide for 1.5 h at 4°C, dehydrated through a series of graded ethanol solutions and 1:1 EPON-812 epoxy resin, and then embedded in EPON-812 epoxy resin. 5 nm semi-thin sections were stained with toluidine blue for 10 min, blocks trimmed, and ultrathin sections stained with lead citrate and uranyl acetate at room temperature. Specimens were examined using a transmission electron microscope (magnification, ×10,000 or 20,000).

Briefly, the total RNA of lung tissue was prepared with an RNA TRIzol® reagent (Thermo Fisher Scientific, Inc.) in accordance with the manufacturer's instructions and agarose gel electrophoresis of extracted RNA performed to ensure sample RNA integrity and inexistence of DNA contamination. Finally, the differentially expressed genes were analyzed by functional annotation and enrichment analysis using clusterProfiler software (http://www.bioconductor.org/packages/release/bioc/html/clusterProfiler.html) for Gene Ontology functional enrichment analysis of the differential gene sets and Kyoto Encyclopedia of Genes and Genomes (KEGG) (29) pathway enrichment analysis and then the differentially related genes associated with AMS in the IL-17 signaling pathway screened.

A total of 0.1 g lung tissue was ground in liquid nitrogen and then 1 ml TRIzol® (Thermo Fisher Scientific, Inc.) added to extract the total RNA. The cDNA was obtained using a PrimeScript RT reagent kit with gDNA Eraser (Takara Bio, Inc.). RT-qPCR was performed using a TB Green Premix Ex Taq II (Takara Bio, Inc.) with a PIKORed 96 RT-PCR detection system (Thermo Fisher Scientific, Inc.). All operations were performed in accordance with the manufacturer's protocols. Relative gene expression levels of IL-1, IL-6, IL-17C, NF-κB, and TNF-α were determined using the comparative 2−ΔΔCq method using β-actin as endogenous control (30). The thermocycling conditions were: denaturation temperature 94°C for 30 sec, annealing temperature 56°C for 35 sec and extension temperature 72°C for 30 sec (36 cycles). The primer sequences in this study are shown in Table I. Each experiment was repeated more than three times per tissue to ensure consistency of the experimental results.

Lung tissue of the 24 h group (Fig. 1B) showed thickening of the alveolar septum and inflammatory cell infiltration not visible in the control group (Fig. 1A). The alveolar structure of the 48-h group was severely damaged (Fig. 1C), with a large number of inflammatory cells and red blood cells diffused in the field of vision. Lung tissue injury was still apparent in the 72-h group (Fig. 1D). However, alveolar structure showed none of the damage visible in the 48-h group, suggesting recovery from hypoxic stress at the 72-h time point.

Electron microscopy demonstrated that the thickness of the basement membrane of the capillary increased, compared with the control group (Fig. 1E) to different extents. The control group was also used as a marker to measure the pathological damage of each group of rats. In the lung tissue of the 24 h group, the thickness of the capillary basement membrane increased to varying degrees. Alveolar septum capillary thickness also increased, and microvilli shedding was observed (Fig. 1F). In the 48 h group, alveolar wall capillary endothelial cell edema became more apparent (Fig. 1G). In the 72 h group, basal membrane partial shedding and blood-air barrier obviously thinning are still evident (Fig. 1H).

Levels of GSH-Px, SOD and MDA in rats under hypoxic stress in different groups

Experimental results of oxidative stress in rats of each group.

The production of ROS and the elimination of antioxidants create a stable dynamic balance. When the organism is subjected to hypoxic stress, oxygen-free radicals accumulate in cells and damage lipids, proteins and DNA, thus causing lung tissue damage (36–38). The present study suggested that the activities of SOD and GSH-Px decreased and the expression of MDA increased as hypoxic stress was prolonged; that is, oxidative damage occurred in lung tissue under hypoxic stress.

Oxidative damage can directly stimulate macrophages to release IL-1β. As a pro-inflammatory factor, IL-1β can initiate immune response and recruit centralized granulocytes, macrophages and other inflammatory cells, which in turn can to infiltrate tissues and release IL-6 and TNF-α (39). The results of the present study demonstrated that IL-1β levels were highest after 24 h of hypoxic stress, while IL-6 and TNF-α expression was highest after 48 h of hypoxic stress. GSH-Px and SOD activity were the lowest after 48 h of hypoxia stress, and MDA was highly expressed, suggesting that inflammation and the exudation of tissue fluid in lung tissue were further aggravated. The injury to alveolar epithelial cells and pulmonary interstitial edema was most pronounced at 48 h. Previous studies demonstrated that IL-17C was not produced by activated T cells (22); rather, it is secreted by the epithelial cells of various tissues (40). In the present study, it was hypothesized that, given the aforementioned three factors, pulmonary epithelial cells could also participate in the immune response. The presence of large quantities of IL-17C activates the NF-κB pathway and participates in the onset and development of AMS. According to the experimental results of the present study, IL-17C stimulation could increase the expression of NF-κB in the AMS rat model. The combined stimulation of IL-17C and NF-κB also increased the expression of IL-17C, NF-κB, TNF-α, IL-1β, and IL-6 in alveolar epithelial cells, which also reflects the positive feedback regulation of IL-17C on the acute inflammatory response of pulmonary epithelial cells.

According to the literature, IL-17C can also regulate the expression of IL-1β, TNF-α, and IL-6. However, the expression of these three factors was downregulated in the 72-h group. The specific molecular mechanism needs further study, and it may be related to the immune regulatory function of 1,25-dihydroxyvitamin D3 (41), studied earlier by our group.

XP contributed to the idea of the study and served an important role in interpreting the results. FL contributed significantly to analysis and manuscript preparation. XL performed data analysis and wrote the manuscript. ZC and RW helped perform the analysis with constructive discussion. All authors read and approved the final manuscript.

The animals involved in the present study were handled in accordance with the National Regulations on the Administration of Laboratory Animals (GB14923-2010). The animal experiment scheme was approved and examined by the Ethics Committee of School of Medicine of Qinghai University. 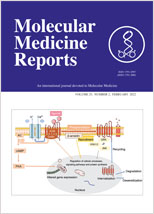