Autophagy‑related 4A (ATG4A) is an autophagy regulator. The current study investigated the role of ATG4A in the development of tamoxifen‑resistant breast cancer. ATG4A expression was assessed in tumor and adjacent normal tissue obtained from The Cancer Genome Atlas database. Analyses of the disease‑free survival between the ATG4A high and low expression groups was then evaluated in patients with breast cancer. Cell viability and apoptosis in MCF7/R cells was detected using Cell Counting Kit‑8 assay and flow cytometry, respectively. Gene set enrichment analysis identified the pathway responsible for the effects of ATG4A. The protein expression of ATG4A, LC3, p62, Bcl‑2, Bax, GSK‑3β, phosphorylated (p)‑GSK‑3β, β‑catenin, cyclinD1 and c‑myc in MCF and MCF7/R cells was determined using western blot. In this study, ATG4A expression was increased in the tumor tissues, and a higher ATG4A expression exhibited poor disease‑free survival. While 4‑hydroxytamoxifen (4‑OHT) increased ATG4A expression in MCF7 and MCF7/R cells, ATG4A expression decreased in the cells treated with 3‑methyladenine (3MA). Treatment with 4‑OHT and rapamycin (an autophagy activator) increased the LC3‑II/LC3‑I ratio, LC3 puncta number and decreased the level of p62 in MCF7/R cells. However, the effects of 4‑OHT and rapamycin were reversed by 3MA and knockdown of ATG4A, respectively. After treatment with 4‑OHT, knockdown of ATG4A suppressed proliferation, triggered apoptosis, decreased the expression of Bcl‑2, β‑catenin, cyclin D1 and c‑myc, and increased the expression of Bax and p‑GSK3β in MCF7/R cells. Moreover, SKL2001, an activator of the Wnt/β‑catenin signaling pathway, reversed the effects of ATG4A knockdown on cell viability and apoptosis in MCF7/R cells. In conclusion, the knockdown of ATG4A inhibited the anticancer effects of 4‑OHT in breast cancer.

Autophagy can cause drug resistance, and thus lead to a reduction in the benefits of chemotherapy (7). Alterations in autophagy have been considered to be a mechanism of tamoxifen resistance (8). The synthetic ER antagonist 4-hydroxytamoxifen (4-OHT) induces autophagy and decreases apoptosis in ER-positive breast cancer cells (9).

To date, >30 autophagy-related genes have been identified (10). Among them, autophagy-related (ATG) protein 4 (ATG4), a cysteine protease, serves an important role in the ATG8/LC3 lipid conjugation system, which is essential for the late step of autophagosome formation (11). The human genome contains four ATG4 homologous genes: ATG4A, ATG4B, ATG4C and ATG4D (12). Previous studies have reported that ATG4A cleaves gamma-aminobutyric acid receptor-associated protein subfamily isoforms (a subfamily of the ATG8 proteins) (11,13). ATG4A is overexpressed in multiple human cancers, such as osteosarcoma (14) and gastric cancer (15), and its overexpression is often associated with the progression of malignancy. A previous study has reported that ATG4A participates in stem cell maintenance during breast cancer (16). Therefore, an improved understanding of the role of ATG4A during tamoxifen resistance would be beneficial in treatment planning for patients undergoing chemotherapy to treat breast cancer.

In the present study, it was aimed to investigate whether interference with ATG4A could affect autophagy and 4-OHT sensitivity in breast cancer cell lines and elucidate its underlying molecular mechanisms.

Lentiviral plasmid (GV248; GeneChem, Inc.) carrying the knockdown vector of ATG4A [short hairpin (sh)-ATG4A] and empty vector were purchased from Shanghai GenePharma Co., Ltd. The sequences of sh-ATG4A and sh-negative control (NC) were as follows: sh-ATG4A sense, 5′-GGATGTTTGAATTAGTTCA-3′ and antisense, 5′-TGAACTAATTCAAACATCC-3′; and sh-NC sense, 5′-TTCTCCGAACGTGTCACGTTT-3′ and antisense, 5′-ACGTGACACGTTCGGAGAATT-3′. A second-generation system was used in this experiment. Briefly, 293T cells (The Cell Bank of Type Culture Collection of The Chinese Academy of Sciences) were seeded into six-well plates (4×105 cells/well) and transfected with lentiviral plasmid, psPAX2 (Biovector NTCC Inc.) and PMD2G (Biovector NTCC Inc.) in the following ratio: 10:7.5:2.5 µg. Transfection was conducted using lipofectamine® 2000 (Invitrogen; Thermo Fisher Scientific, Inc.) at 37°C for 48 h. Next, lentiviral particles were collected after centrifugation at 50,000 × g for 2 h. MCF7/R cells (5×104 cells/well) were seeded into 24-well plates and then infected with lentivirus supernatant (1×108 TU/ml) at a multiplicity of infection of 20 in the presence of 8 mg/ml polybrene (MilliporeSigma). After 48 h of incubation, stably transfected cell lines were selected with 2.5 µg/ml puromycin (Sigma-Aldrich; Merck KGaA) for 1 week. The stably transfected cell lines were maintained under 0.5 µg/ml puromycin. After transfection for 24 h, subsequent experiments were performed. Cells were treated with 4-OHT (10 µM). Additionally, 20 µM SKL2001 (MedChemExpress) was added to the 4-OHT + sh-ATG4A group.

According to the manufacturer's instructions, cell apoptosis was detected using an Annexin V-FITC kit (Beyotime Institute of Biotechnology). Briefly, MCF-7/R cells (5×104 cells/well) were harvested and centrifuged at 1,000 × g for 5 min at room temperature. Cells were then stained with Annexin V-FITC and propidium iodide for 15 min at room temperature in the dark. Finally, apoptosis was analyzed using a BD Accuri™ C6 Plus flow cytometer (BD Biosciences) and the rate of apoptosis was calculated using BD Accuri C6 Software (BD Biosciences).

MCF7 and MCF7/R cells were seeded into 12-well plates (6×104 cells/well) at 37°C overnight, and then transfected with the GFP-LC3 expression plasmids (2 µg/l; LC3; Hanbio Biotechnology Co., Ltd.) using lipofectamine® 2000 at 37°C for 24 h. After transfection for 24 h, cells were treated with 4-OHT (10 µM), 3MA (1 mM) or rapamycin (10 nM) for 24 h. Cells were then fixed with 4% formaldehyde for 10 min at room temperature and observed under a confocal microscope (Leica Microsystems GmbH). The number of LC3 puncta was counted using at least 20 cells from six randomly selected fields, and each experiment was repeated three times.

To further explore the pathway in which ATG4A may be involved, the Molecular Signatures Database (v7.4; http://www.gsea-msigdb.org/gsea/msigdb/index.jsp) hallmark gene set was used to perform GSEA. GSEA parameters were set as follows: Number of permutations=1,000; permutation type=gene_set; enrichment statistic=weighted; metric for ranking genes=Signal2Noise. Gene sets with a positive (or negative) enrichment score and P<0.05 after 1,000 permutations were considered as significantly enriched gene sets.

To investigate the clinical relevance of ATG4A expression, ATG4A expression in TCGA database was firstly analyzed. The results revealed that the expression of ATG4A was higher in breast cancer tissues than in a number of adjacent normal tissues (Fig. 1A). Subsequently, the clinical characteristics (age and TNM stage) of the patients were analyzed. As demonstrated in Table I, high expression of ATG4A was significantly associated with age, but not with TNM stage. In addition, the results of Kaplan-Meier survival analysis revealed that patients with a higher ATG4A expression exhibited poor disease-free survival (Fig. 1B). These results indicated that ATG4A may be involved in the pathogenesis of breast cancer.

Relationship between ATG4A expression and clinicopathological features in patients with breast cancer.

ATG4A expression and autophagy are enhanced in MCF7/R cells

To investigate the role of ATG4 in 4-OHT resistance in breast cancer cells, MCF7/R cells were transfected with sh-ATG4 to establish a stable knockdown ATG4A cell line. As demonstrated in Fig. 3A and B, ATG4A expression was significantly inhibited in MCF7/R cells transfected with sh-ATG4. CCK-8 and flow cytometric apoptosis analysis revealed that there was no significant difference in cell viability and apoptosis between the control and 4-OHT groups, while the knockdown of ATG4A reduced viability and apoptosis in MCF7/R cells treated with 4-OHT (Fig. 3C and D). Additionally, the expression of apoptosis-related proteins (Bcl-2 and Bax) was analyzed via western blot analysis. The results demonstrated that the knockdown of ATG4A decreased Bcl-2 expression and increased Bax expression (Fig. 3E).

Previous studies have demonstrated that ATG4A is closely related to autophagy (19–21). However, the role of ATG4A during autophagy in breast cancer cells remains unclear. To further confirm the role of ATG4A in autophagy, MCF7/R cells were transfected with sh-ATG4 to perform loss-of-function analysis. As revealed in Fig. 4A and C, after treatment with 4-OHT, the knockdown of ATG4A decreased the LC3-II/LC3-I ratio, increased the level of p62, and decreased the number of LC3 puncta compared with 4-OHT + sh-NC group. After treatment with rapamycin (an autophagy activator), the LC3II/LC3I ratio increased, p62 level decreased, and the number of LC3 puncta increased compared with control group. The knockdown of ATG4A reversed the effect of rapamycin on the LC3-II/LC3-I ratio, level of p62 and number of LC3 puncta (Fig. 4B and D).

To further explore the mechanism of ATG4A in breast cancer cells, GSEA was performed to identify the pathway responsible for the effects of ATG4A. The results indicated that ATG4A was enriched in the Wnt/β-catenin pathway (Fig. 5A). The Wnt/β-catenin pathway serves an important role in cancer progression and chemoresistance (22). Compared with the 4-OHT+sh-NC group, the knockdown of ATG4A increased p-GSK3β expression and decreased the expression of β-catenin, cyclin D1 and c-myc in MCF7/R cells (Fig. 5B). Compared with the 4-OHT+sh-NC group, the knockdown of ATG4A decreased the expression of β-catenin in the nucleus (Fig. 5C and D). SKL2001 is an activator of the Wnt/β-catenin signaling pathway (23). Treatment with SKL2001 reversed the effect of ATG4A knockdown on cell viability, apoptosis and the Wnt/β-catenin signaling pathway in MCF7/R cells (Fig. 5E-G).

Breast cancer is the most common malignant cancer in women (24). Although surgery and radiotherapy have been indicated to be curative for certain early stage cases, chemotherapy remains a common and essential therapeutic method in breast cancer (25,26). Long-term clinical observations have revealed that patients with breast cancer are more responsive to endocrine therapy agents, such as selective ER modulators (SERMs), aromatase inhibitors and selective ER downregulators (27,28). Tamoxifen, which is one of the SERMs, is a commonly used drug for treating ER positive breast cancer (4). However, the efficacy of tamoxifen is limited due to primary or acquired resistance (5,29–31). Thus, it is important to increase the sensitivity of breast cancer to tamoxifen. The present study suggested that downregulation of ATG4A inhibits the proliferation of breast cancer cells and overcomes tamoxifen resistance.

ATG4A, which is an autophagy-regulating molecule, is overexpressed during malignant progression of cancer (32). For instance, ATG4A expression is increased in osteosarcoma tissues, and its overexpression enhances the proliferation of osteosarcoma cell lines (14). Yang et al (15) identified that the expression of ATG4A is upregulated in gastric cancer tissues and its overexpression promotes cell migration and invasion. The present study revealed that a higher expression of ATG4A was associated with a poor prognosis in breast cancer. In addition, an increase in ATG4A was observed in tamoxifen-resistant cells compared with the control group. Autophagy is a protective housekeeping mechanism that maintains cellular metabolism under nutrient-limiting conditions, which is implicated in tumor development (33). LC3 is commonly used as an indicator for detecting autophagy (34). During the formation of autophagosomes, LC3 is cleaved by ATG4 to form LC3-I, then cleaved-LC3 is conjugated with phosphatidylethanolamine to regulate the conversion of LC3-I to LC3-II. (35) Several studies suggested that ATG4 family members promote tumor progression. For example, the knockdown of ATG4B suppresses the survival of chronic myeloid leukemia cells, and promotes imatinib mesylate chemosensitivity by suppressing autophagy (36). The knockdown of ATG4C impairs autophagy, inhibits glioma progression, and sensitizes these cells to temozolomide (37). Studies have reported that 4-OHT stimulates autophagy in breast cancer, and inhibition of autophagy enhances the sensitivity of breast cancer cells to 4-OHT (2,38,39). In the present study, treatment with 4-OHT significantly increased the LC3-II/LC3-I ratio and decreased the level of p62 (a marker of autophagy), while the knockdown of ATG4A enhanced the sensitivity of breast cancer cells to 4-OHT by inhibiting autophagy. Consistent with the findings of the present study, another study reported that overexpression of microRNA-24-3p led to reduction in ATG4A expression, allowing etoposide/cisplatin-resistant small-cell lung cancer cells to become sensitive to etoposide and cisplatin (21).

In summary, it was demonstrated that knockdown of ATG4A in tamoxifen-resistant cells reduced autophagy and suppressed the Wnt/β-catenin pathway. ATG4A may affect the response to tamoxifen therapy of patients with breast cancer.

QL designed the experiments. LZ performed the research. QL analyzed the data and wrote the manuscript. QL and LZ confirmed the authenticity of all the raw data. Both authors read and approved the final version of the manuscript. 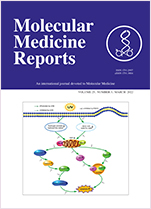