Malignant lymphomas are a group of malignant hematological tumors originating in lymph nodes or other lymphoid tissue and include Hodgkin's lymphoma and non-Hodgkin lymphoma (NHL) (1). Diffuse large B-cell lymphoma (DLBCL) is the most common subtype of NHL worldwide (2). Currently, in Europe, the incidence of DLBCL is ~3.8/100,000 individuals (3). DLBCL is an aggressive and highly heterogeneous hematological tumor (4), which accounts for 80% of invasive lymphomas (5) and can lead to diffuse destruction of normal lymph node structure (4). At present, there is no effective clinical treatment for patients with DLBCL; thus, novel treatment methods for DLBCL are needed.

Previous studies on the mechanism of 5′-nucleotidase domain-containing 2 (NT5DC2) in certain types of malignancy have shown that knockout of NT5DC2 can inhibit angiogenesis and recruitment of tumor-associated macrophages to suppress colorectal cancer progression (6). NT5DC2 inhibition by regulating p53 signaling has also been reported to suppress non-small cell lung cancer metastasis (7). NT5DC2 upregulation is associated with poor overall and relapse-free survival of hepatocellular carcinoma (HCC) and is an independent prognostic factor for overall survival (8). Furthermore, NT5DC2 may promote liver cancer cell proliferation by stabilizing EGF receptor (9) and causes tumorigenicity of glioma stem cells by increasing Fyn expression (10). However, to the best of our knowledge, there are no studies on the value of NT5DC2 for the treatment of DLBCL.

The IGF2BP family consists of three members, namely IGF2BP1, 2 and 3, which bind directly to and stabilize the mRNA of their target gene (11,12). IGF2BP2 serves an important role in myogenesis (13,14), maintenance of glioblastoma stem cells (15,16), and invasion and migration of cancer cells (primarily HCC) (17). Previous studies have shown that IGF2BP2 enhances HCC proliferation in vitro and in vivo via an N6-methyladenosine-flap structure-specific endonuclease 1-dependent mechanism (18). Upregulation of IGF2BP2 in pancreatic cancer via multiple mechanisms has also been reported to promote tumor cell proliferation through activation of the PI3K/Akt signaling pathway (19). However, the functions of RBP IGF2BP2, and the interactions between IGF2BP2 and NT5DC2 in DLBCL remain to be explored.

The present study aimed to investigate whether downregulation of IGF2BP2 and NT5DC2 suppresses cell proliferation, and induces cycle arrest and apoptosis in DLBCL cells by regulating the p53 signaling pathway.

Transfected OCI-Ly7 cells (1×103 cells/well) were seeded into a 96-well plate, which was placed in a humidified incubator at 37°C for ≥24 h. At 24, 48 and 72 h, 10 µl CCK-8 reagent was added to each well and the 96-well plate was then incubated at 37°C for 2 h according to the manufacturer's protocol (Beyotime Institute of Biotechnology). Finally, the OD value at 450 nm was determined using a microplate reader.

Transfected OCI-Ly7 cells (5×103 cells/well) were seeded on a pre-treated glass coverslip in a 24-well plate. Subsequently, 200 µl BrdU (Beyotime Institute of Biotechnology) was added to the cells and incubated at 37°C in the presence of 5% CO2 for 24 h. The transfected OCI-Ly7 cells were then fixed in 4% paraformaldehyde for 15 min at room temperature, permeabilized with PBS containing 0.1% Tween-20 and blocked with 2% BSA (Sigma Aldrich; Merck KGaA) at room temperature for 2 h. The transfected OCI-Ly7 cells were then incubated with primary antibody against BrdU (1:500; cat. no. ab6326; Abcam) for 1 h at 4°C and with a secondary antibody (cyanine 3-conjugated goat anti-mouse IgG; cat. no. A0521; 1:500; Beyotime Institute of Biotechnology) for 30 min at room temperature, then stained with 20 mg/ml DAPI at 37°C for 30 min. After washing with PBS, BrdU/DAPI-positive cells were observed under a fluorescence microscope (magnification, ×200).

An EZ-Magna RIP™ RNA-Binding Protein Immunoprecipitation Kit (cat. no. 17-704; MilliporeSigma) was employed to perform RIP assay following the manufacturer's instructions. A total of 2×106 OCI-Ly7 cells were incubated with 100 µl RIP Lysis Buffer (MilliporeSigma) for 5 min at 4°C and centrifuged at 40,000 × g at 4°C for 10 min to obtain the cell lysate. Subsequently, 50 µl protein A/G magnetic beads conjugated with 5 µg anti-IGF2BP2 (cat. no. ab117809; 2 µg/mg; Abcam) or IgG antibody (cat. no. ab172730; 2 µg/mg; Abcam) were added to 800 µl cell lysate and incubated overnight at 4°C. After being washed with washing buffer six times, proteinase K was then used to isolate the immunoprecipitated RNA at 55°C for 30 min. The expression levels of NT5DC2 in the immunoprecipitated RNA were detected by RT-qPCR analysis as aforementioned.

StarBase v2.0 (https://starbase.sysu.edu.cn/) was used to predict the potential binding of NT5DC2 with IGF2BP2.

The apoptosis of OCI-Ly7 cells transfected with shRNA-NT5DC2 was decreased by upregulation of IGF2BP2 (Fig. 4D). In addition, upregulation of IGF2BP2 promoted Bcl-2 expression, and suppressed the expression levels of Bax, cleaved caspase 3, cyto-c and cleaved PARP in OCI-Ly7 cells transfected with shRNA-NT5DC2 (Fig. 4E). Collectively, IGF2BP2 elevation may reverse the effects of NT5DC2 knockdown on DLBC cell proliferation and apoptosis.

The incidence of DLBCL in China has been increasing at a rate of ≥25,000 cases/year (21), and the mortality rate of malignant lymphoma was estimated at 7.07/100,000 in Spain in 2018 (22). Although rituximab and anthracycline-based combination chemotherapy regimens have the potential to cure DLBCL, 30–40% of patients still have poor prognosis due to refractory or recurrent disease, as well as severe side effects and development of drug resistance due to long-term chemotherapy (23). Therefore, it is necessary to identify novel effective treatments for patients with DLBCL.

NT5DC2 is a member of the NT5DC family, which has a highly similar sequence to 5′-nucleotidase, cytosolic II (NT5C2). Mutant NT5C2 has been reported to be associated with proliferation, metastasis and chemotherapy resistance of acute lymphoblastic leukemia cells (24,25). The present results indicated that NT5DC2 was increased in DLBCL, cells and knockdown of NT5DC2 markedly suppressed the viability and proliferation of OCI-Ly7 cells in vitro. These findings were consistent with previous studies, which showed that NT5DC2 is oncogenic in numerous types of tumor, such as HCC, glioblastoma, leiomyosarcoma and colorectal cancer (6,9,10,26). The occurrence and development of tumors are associated with dysregulation of the cell cycle and cell cycle arrest is one of the primary causes of the apoptosis of tumor cells (27). In the present study, knockdown of NT5DC2 increased the G0/G1 phase ratio and decreased the S phase ratio in OCI-Ly7 cells, which suppressed the viability and proliferation of OCI-Ly7 cells. The cell cycle is regulated by multiple proteins, including cell cycle-promoting (cyclin D1, cyclin D3, CDK4 and CDK6) and -arresting proteins (p18, p21 and p27) (9). The present data showed that the expression levels of cyclin D1, CDK4 and CDK6 was downregulated in NT5DC2-knockdown OCI-Ly7 cells, which led to cell cycle arrest.

Apoptosis, also known as type-I programmed cell death, is an active process of programmed cell death regulated by genes, including Bcl-2 and Bax, under physiological or pathological conditions (28). Apoptosis in different tissues shows common characteristics, such as morphological (formation of apoptotic bodies) and biochemical changes (ectropion of phosphatidylserine in the membrane and DNA fragmentation) (29). The present study revealed that knockdown of NT5DC2 induced the apoptosis of OCI-Ly7 cells, which was accompanied by decreased expression levels of anti-apoptotic proteins (Bcl-2) and increased expression levels of pro-apoptotic proteins (Bax, cleaved caspase 3, cyto-c and cleaved PARP); these effects were reversed by IGF2BP2 overexpression.

The signaling pathway regulated by the tumor suppressor gene p53 is inhibited in numerous types of cancer, such as colon, breast, lung and esophageal cancer (30). In vitro and in vivo studies have revealed that reactivation of p53 may eliminate tumors initiated by transforming events independent of p53 (31,32). The tumor suppressor protein p53 serves a key role in tumors, and its dysfunction is associated with the pathogenesis of B-cell malignancy, including DLBCL (33,34). Drakos et al (35) found that the activated p53 signaling pathway led to cell cycle arrest and apoptosis in DLBCL cells. Evasion of apoptosis of DLBCL cells occurs via p53 inactivation, and an effective and precise therapeutic strategy for DLBCL has been observed using the mouse double minute 2 homolog-p53 inhibitor APG-115 (36). The present study reported that p53 expression levels were markedly upregulated in NT5DC2-knockdown OCI-Ly7 cells, whereas the opposite results were detected in cells transfected with Oe-IGF2BP2, which was consistent with the findings reported in a previous study (7).

There are certain limitations in the present study. Firstly, the present study only investigated the role of NT5DC2 in DLBCL in vitro; in vivo data to verify these findings should be collected in future work. Secondly, further clarification is required to identify the detailed and specific regulatory mechanism underlying NT5DC2/p53 signaling-mediated DLBCL. To the best of our knowledge, there have been no studies on drugs targeting NT5DC2 for clinical application. Further investigation of the molecular role of NT5DC2 is required for the clinical application of NT5DC2 as a therapeutic target.

In conclusion, the present study demonstrated that knockdown of NT5DC2 suppressed proliferation, and induced cell cycle arrest and apoptosis in DLBCL cells by regulating the p53 signaling pathway, which was reversed by IGF2BP2 overexpression. Therefore, IGF2BP2 and NT5DC2 may be promising targets to improve treatment efficacy in DLBCL.

The authors declare they have no competing interests. 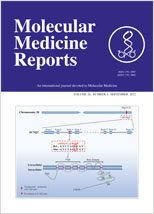