Hydroxygenkwanin suppresses proliferation, invasion and migration of osteosarcoma cells via the miR‑320a/SOX9 axis 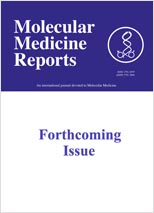