Drug-induced liver injury (DILI) is a toxic side effect of numerous drugs (1–4), including a number of anti-inflammatory and analgesia drugs (5–8). DILI is the commonest reason for withdrawing drugs from the market and/or issuing warnings and modification of use (9). Data from prospective DILI registries suggest that antibiotics remain the most common cause of DILI (10–12). The American DILI Network (DILIN) reported antibiotics to be implicated in 45.4% of cases (13). Other common drug classes reported by the American DILIN (14) are herbal and dietary supplements (16.1%), cardiovascular agents (9.8%), central nervous system agents (9.1%), anti-neoplastic agents (5.5%) and analgesics (3.7%). DILI includes the whole spectrum from asymptomatic elevation in liver tests to acute liver failure (ALF). In fact, DILI remains the most common cause of ALF in the UK (14) and USA (15).

Binaprofen is an anti-inflammatory drug that is not currently in market, and still in clinical study; its chemical structure is C18H23NO5 and it relieves fever and analgesia (16–18). It exhibits a notable analgesic effect. Studies have done about the pharmacological and toxicological effects of binaprofen (19,20), and it has been clinical licensed in China.

Our previous study (21) demonstrated that binaprofen induces liver toxicity and damage similar to acetaminophen (APAP) in zebrafish. APAP is one of the most widely used antipyretic and analgesic drugs in the US. It is reported to be regularly consumed by over 60 million Americans on a weekly basis (22). Though it is safe at therapeutic doses, an overdose can cause severe liver injury and even ALF in humans (23). The mechanisms that underlying APAP-induced liver injury have been extensively studied (24,25). So APAP was chosen as positive drug in this paper. To the best of our knowledge, however, the mechanism underlying liver injury has not yet been revealed. The present study aimed to determine this mechanism at the genetic level and provide a basis for potential treatment options.

Maintenance and breeding of zebrafish

Male and female AB-line, 1–2 g, adult zebrafish (Danio rerio, 90–100 days post-fertilization; weight, 1–2 g) were obtained from Southern Medical University, Guangzhou, China. Zebrafish were acclimatized for 2 weeks. The animal protocol was designed according to animal welfare and ethics, which was approved by animal care and use committee of Guangzhou General Pharmaceutical Research Institute (Haizhu, China; approval no. was 2012-005). Fish were maintained in aerated water at 23±1°C, humidity 65%, pH 7.8±1.0, 0.25 g/l hardness, 12/12-h light/dark cycle and density of 1 fish/l with free access to food and water. Experiments were performed using a total of 150 animals, including 75 male and 75 female.

Our previous study (21) demonstrated that binaprofen at 0.8 mM and APAP at 4.0 mM cause notable liver damage in zebrafish. Therefore, zebrafish were divided into control (untreated), binaprofen (0.8 mM) and APAP (4.0 mM) groups (n=50/group). Zebrafish were exposed to drug at 22.8°C for 12, 24 or 48 h, then euthanized via 2-step hypothermal shock, as described in AVMA guidelines (26).

Zebrafish were rapidly killed by immersion in 2–4°C water for 10–20 sec. Exposure was continued for ≥10 min following loss of operculum movement to ensure death. Followed by rapid chilling, zebrafish tail was transected as previously described (27) and 20 µl blood was collected. Exsanguination was performed to euthanize zebrafish. Rapid chilling followed by exsanguination was the recommended 2-step euthanasia method in AVMA Guidelines for the Euthanasia of Animals: 2020 Edition (28).

Blood was collected by exsanguination. Serum samples were collected by tail cutting and capillary collection method (n=5/group). Briefly, the tail was transected from cranial to the caudal fin, 100-µl microcapillaries was used to collect zebrafish blood from the cut surface and blood was placed in 1.5 ml centrifugal tube. A total of 200 µl blood was collected as one sample; there were 5 samples/group. Blood was centrifuged for 10 min at 1,800 × g at 4°C. Supernatant was collected to detect alanine transaminase (ALT), aspartate transaminase (AST) and lactate dehydrogenase (LDH) (ALT assay kit, cat. no. 130301, AST assay kit, cat. no. 130201and LDH assay kit, cat. no. 130503, all kits from Zhejiang Yilikang biotek Company) by biochemical detection method using a biochemical analyzer (7100; Hitachi, Ltd.).

The entire zebrafish liver (n=5/group) was collected and placed in 1.5 ml centrifugal tube. 0.9% NaCl was added and liver tissue was homogenized and centrifuged for 10 min at 4,000 × g at 4°C. Supernatant was collected to detect MDA and GSH (MDA assay kit, cat. no. 20130515 and GSH assay kit, cat. no. 20130428; both kits from Nanjing Jiancheng Bioengineering Institute) using a microplate reader (Elx800; BioTek China) according to the manufacturer's instructions.

Liver tissue samples (n=10/group) were fixed in 10% formalin for at 25°C for 24 h and dehydrated with gradient alcohol. Tissue was immersed in 60°C paraffin wax for 1 h and moved to −10°C freezing table for 30 min. Paraffin-embedded samples were sliced (5 µm). Sections were dewaxed with xylene and rehydrated in descending alcohol. Slices were dyed with 0.5% hematoxylin aqueous solution at 25°C for 3 min and 0.5% eosin staining solution at 25°C for 3 min. 90% neutral balata was used as blocking reagent, slices were blocked at 25°C for 30 sec. Morphological examination of hepatocytes was performed using a light microscope (BX51; Olympus Corporation) at 40X magnification using image analysis system 11.0 (cellSens Standard; both Olympus Corporation). Samples were scored as previously described (29) by two independent pathologists who were blinded to the experimental groups.

Liver tissue samples were fixed in 2% osmium tetroxide at 4°C for 24 h, dehydrated, embedded in Epon/Araldite resin at 4°C for 1 h and sectioned (70 nm). Samples were stained with premixed solutions of 2% uranyl acetate and lead citrate at 4°C for 20 min. Ultrastructure examination of hepatocytes was performed using a transmission electron microscope (JEM-1400; JEOL, Ltd.) with 10× magnification. The morphological changes of hepatocyte mitochondria were examined using image analysis system 11.0 (cellSens Standard; both Olympus Corporation).

Value of MDA and GSH

Control cells exhibited round nuclei with clear edges and uniform staining, while the nuclei of apoptotic cells exhibited irregular edges and concentration of chromosomes (Fig. 4). Liver cells with strong staining accompanied by nuclear contraction and nucleosome fragmentation were considered to indicate apoptosis. In Binaprofen and APAP groups, DAPI staining is bluish-white fluorescent, apoptotic cells presented with nuclear enrichment, deep staining, or crescent-shaped aggregation of nuclear chromatin on one side of the nuclear membrane. The nucleus broke down to form fragments and disintegrated. These results indicated that liver cell apoptosis occurred in binaprofen and APAP groups.

Effect of binaprofen on certain differentially expressed genes at 12, 24 and 48 h.

[i] -, indicates that there is no obvious up regulation or downregulation.

Binaprofen is not currently commercially available. Our previous study evaluated the effect of different doses of binaprofen and APAP on liver injury; both induced liver injury to a similar extent (21). The half-maximal lethal concentration (LC50) of binaprofen was 1.2 mM, which was 2 times higher than its maximum recommend dose (19); LC50 of APAP was 5.2 mM, which was 1.6 times higher than its people maximum recommend dose (31). Therefore, binaprofen was selected for investigation of the underlying mechanism of toxicity. APAP was used as a positive control because of its known ability to induce liver injury (32).

Therefore, the experimental results showed that the mechanism of hepatotoxicity was associated with lipid peroxidation and apoptosis.

DILI is associated with inappropriate activation of apoptotic cell death pathways (33–36). Apoptosis serves a key role in progression of liver disease, such as cirrhosis (37,38). Apoptosis is mediated by two central pathways, the intrinsic and extrinsic pathway. The mitochondrial pathway is the intrinsic pathway and begins with permeabilization of the mitochondrial outer membrane (39–42). Release of cytochrome c from mitochondria is key factor to initiate apoptosis (43,44). The released cytochrome c activates caspase-9; this leads to caspase-3 activation, cellular protein cleavage and apoptosis (45). Following binaprofen exposure, there was swelling in mitochondria and increase in DAPI-positive cells with condensed and fragmented nuclei. According to reports (46), DAPI stains apoptotic cells with high labeling efficiency (~100%) and does not change the ultrastructure of organelles. The present study aimed to determine the toxicity of binaprofen, therefore, DAPI was used to detect hepatocyte apoptosis. The results suggested apoptosis occurred; this was confirmed by altered expression of genes associated with apoptosis in the microarray. Moreover, electron microscopy showed liver cell mitochondrial swelling and vacuolization, which indicated that apoptosis was associated with mitochondria. In addition, there was a significant increase in Bcl2 family and caspase gene expression in microarray; this was validated by RT-qPCR. These data suggested that binaprofen induces zebrafish liver injury via the mitochondria-mediated apoptosis pathway.

In the present study, DAPI staining of apoptotic cells was not quantified. TUNEL staining and western blotting were not performed to confirm levels of apoptosis markers; these experiments should be performed in future to quantify apoptosis. Here, it is also found that the signaling pathway of binaprofen-induced liver injury may be associated with PPAR signaling pathway and P53 signaling pathway, we will do further study to clear them.

The datasets generated and/or analyzed during the current study are available in the Gene Expression Omnibus database of National Center for Biotechnology Information repository, ncbi.nlm.nih.gov/geo/query/acc.cgi?acc=GSE199758 (accession no. GSE199758).

The present study was approved by the Institutional Animal Care and Use Committee of Guangzhou General Pharmaceutical Research Institute (approval no. 2012-005) and performed in accordance with international guidelines for the care and use of laboratory animals. All zebrafish experiments in this study were performed from 1st of July to 30th of August 2012. 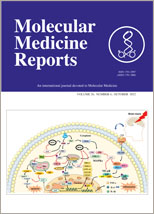