Human papillomavirus (HPV)-mediated transformation of human cervical epithelial cells has been recognized as a multi-step process in which not only viruses but also certain additional unknown factors and (epi)genetic events are required.

Our previous study indicated that one of the factors that may be involved in cervical carcinogenesis is tumor susceptibility gene 101 (TSG101) (1). The TSG101 gene was mapped to chromosome 11.p15.1–p15.2., a region that is associated with the loss of heterozygosity in several tumor types, including breast cancer and cervical cancer (2,3). The TSG101 protein is involved in a variety of important biological functions, such as ubiquitination, transcriptional regulation, endosomal trafficking, virus budding, proliferation and cell survival (4–16). It has been suggested that TSG101 is an important factor for maintaining cellular homeostasis and that perturbation of TSG101 functions leads to transformation (17). To identify the mechanism responsible for TSG101 downregulation during cervical cancer development, we analyzed the TSG101 promoter using cis-element cluster finder (Cister) software. One of the transcription factors, whose binding site was detected in the TSG101 promoter, was LSF (1).

LSF was initially identified due to its ability to activate a major late Simian virus 40 (SV40) promoter (18). Late SV40 factor (LSF) is commonly named as CP2 and is encoded by the TFCP2 gene located in chromosome 12q13 (19,20). LSF belongs to an evolutionary conserved family of transcription factors consisting of two subfamilies: LSF/CP2 and grainyhead (21–24).

With the exception of its important role in regulation of viral and cellular promoters, including SV40, and HIV-1 promoters, including fibrinogen and α-globin, LSF is involved in numerous other important biological functions, such as regulation of the cell cycle, cell growth and development, DNA synthesis, cell survival and Alzheimer’s disease. Moreover, LSF also functions as an anti-apoptotic factor (24,29,30).

The aim of the present study was to analyze TSG101 and LSF protein expression during cervical cancer development.

HPV DNA was identified by polymerase chain reaction (PCR) amplification of the HPV gene sequence using isolated DNA and primers: MY09, MY11 (31) and LC1, and LC2 (32), complementary to the genome sequence of the majority of common types of HPV viruses, as described previously (31,32).

Total RNA (1 μg) was reverse transcribed to cDNA using the QuantiTect Reverse Transcription kit (Qiagen). PCR reactions were run under the following conditions: pre-denaturation at 95°C for 5 min, then 40 cycles at 95°C for 10 sec, 63.8°C for 20 sec, 72°C for 20 sec and a final extension at 72°C for 6 min. qPCR was performed on a Corbett Rotor-Gene 6000 (Corbett Life Science, Concorde, NSW, Australia).

Glyceraldehyde 3-phosphate dehydrogenase (GAPDH) was used as reference gene (33). All reactions for samples and housekeeping genes were run in triplicate.

Immunohistochemical evaluations of TSG101 and LSF expression were performed independently by two pathomorphologists. The cells were counted on an Axiophote (Opton) fluorescence microscope (Carl Zeiss, Oberkochen, Germany) with ×200 magnification on a field of 16 squares (4×4 squares), which corresponded to an area of 0.25 mm2 (0.5×0.5 mm).

Positive staining was scored according to the percentage of cells with positive staining and staining intensity. Measurement of immunoreactive cells was performed using Cell-2 software, version 4.1 (University of Medical Sciences, Poznan, Poland). The quantitative method is based on the analysis of the color distribution and the optical density. The software identifies cells with a greater optical density than the background and, on the basis of the color ratio, classifies cells as immunoreactive. To determine the percentage of positive cells in the sections, the counts of immunopositive cells were divided by the total cell count. For each case, a minimum of 5,000 total cells were counted in a single section.

Data were analyzed with Statistica software, version 6.1. (Statsoft, Krakow, Poland). Statistical significance was analyzed using Kruskal-Wallis with post-hoc Dunn’s test (immunohistochemistry) and one-way analysis of variance with Tukey’s post hoc test (qPCR). The difference was considered to be statistically significant when P-values were <0.05.

Position and probability of LSF transcription factor binding to TSG101 promoter sequence according to Cister software.

Prior to molecular analysis, clinical samples were screened for the presence of HPV viruses. Only HPV-positive HSIL, LSIL and cancer cells, and the HPV-negative control, were used in these studies (Table II).

Characteristics of the studied group.

qPCR analysis showed an increased level of LSF mRNA in dysplastic (LSIL and HSIL) and cervical cancer cells. LSF mRNA level was upregulated to 42.43% in HSIL samples, 30.6% in LSIL samples and 37.54% in cancer samples, compared with that in non-tumor HPV-negative samples (Fig. 2A). The differences in LSF expression were not statistically significant (P>0.05).

Quantitive immunohistochemical analysis based on the percentage of LSF-immunopositive cells confirmed the increased expression of LSF in cervical cancer cells.

The percentage of LSF-immunostained cells was significantly higher in cervical cancer and LSIL samples compared with that in HPV-negative non-tumor controls (P<0.05) (Fig. 2B). LSF was observed mainly in the nucleus (Fig. 2C).

In addition to HPV viruses, numerous factors, such as oncogenes and tumor suppressor genes are involved in cervical cancer development.

Our bioinformatics analysis showed that one of the factors that may bind with the TSG101 promoter and regulate its expression is LSF.

qPCR and immunohistochemical analysis revealed high expression levels of LSF in cervical cancer cells compared with non-cancer samples. These results suggest that LSF is important in cervical tumorigenesis and that LSF mRNA levels generally do not fluctuate. LSF mRNA has been suggested to be a normalization control in gene expression profiling (37). LSF is also expressed ubiquitously in cell lines and in the developing mouse, and protein levels are unaltered during cell cycle progression (38–40).

LSF is a transcription factor involved in the regulation of a variety of viral and cellular promoters. It acts as a transcription activator and repressor (24). LSF stimulates transcription of the SV40 late promoter (18). It also binds to the sequence within the HIV-1 long terminal repeat (LTR) initiation region and recruits YY1 and histone deacetylase 1 to the LTR, inhibiting transcription and thereby contributing to HIV persistence within resting CD4 T cells (41). The cellular factor YY1 also plays a critical role in tumorigenesis and HPV infection, as a positive and negative regulator of cellular and viral gene expression. The YY1-mediated downregulation of HPV transcription, as well as other promoters, act together with LSF (42).

High expression of LSF in cervical cancer HPV-positive cells suggests that this protein may be involved in downregulation of the TSG101 gene promoter and HPV-dependent cervical carcinogenesis. Fan et al identified LSF as a downstream mediator of Notch1 signaling and showed that LSF mediates, at least in part, Notch-1-induced carcinogenesis (43). Notch genes encode heterodimeric transmembrane receptors, which play a critical role in maintaining the balance between cell proliferation, differentiation and apoptosis. Aberrant Notch signaling may contribute to cervical carcinogenesis (44), head and neck cancer (45), lung cancer (46), colon cancer (47), acute myeloid leukemia (48) and diffuse large B-cell lymphoma (30). LSF was also significantly upregulated in hepatocellular carcinoma compared with non-cancer samples (43). In liver cancer, its expression is strongly correlated with tumor grade and aggressiveness (49). Microarray studies revealed that LSF modulated the expression of specific genes involved in regulating invasion, angiogenesis, chemoresistance and senescence (24). It has been suggested that LSF may function as an oncogene in hepatocarcinogenesis (29,30,50). Osteopontin, matrix metalloproteinase 9, c-Met and complement factor H have been identified as a proteins directly regulated by LSF and involved in hepatocarcinogenesis (24).

A major cellular target of LSF is the thymidylate synthase gene, which encodes the enzyme involved in the production of dTTP, required for DNA synthesis. Deregulated LSF expression may facilitate entry into the G1/S phase of the cell cycle, promote DNA synthesis, stimulate transformation and facilitate cancer cell survival. Inhibition of LSF results in either apoptosis during S phase or cell cycle arrest at the G1/S transition (29,30,50).

The role of LSF as a mediator in cervical cancer development must be confirmed in future studies.

This study was supported by a grant (N N401 012136) from the Ministry of Science and Higher Education in Poland. 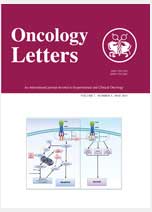