miR‑320a is an independent prognostic biomarker for invasive breast cancer

Breast cancer is one of the most common types of malignant tumor worldwide and is the second leading cause of cancer-related mortality among females (1). Genetic alterations, environmental toxins, hormones, diet and stress are the predominant causes of breast cancer. Although improved early detection and effective treatment may help to prolong the survival times of breast cancer patients, numerous patients succumb to the disease as a result of invasion and metastasis (2). Therefore, it is important to identify effective predictive biomarkers to provide more accurate diagnoses and to develop novel therapeutic strategies.

MicroRNAs (miRNAs) are a class of short (18–24 nucleotides), non-protein-coding RNAs that bind to the 3′ untranslated regions (3′ UTRs) of target mRNAs to regulate gene expression by inhibiting the translation of target mRNAs or by promoting transcript degradation (3–5). A number of studies have found that miRNAs are important in a number of biological processes, including cell differentiation, proliferation, apoptosis and metabolism (6). miRNAs are also involved in the process of cancer development, progression and metastasis, exhibiting oncogenic or tumor suppressor functions (7). For example, miR-34a expression is reduced in neuroblastoma and acts as a tumor suppressor (8); however, miR-155 is overexpressed in chronic lymphocytic leukemia and acts as an oncogene (9).

Previous studies have revealed that miR-320a exhibits abnormal expression levels in multiple malignancies and is involved in the formation, progression and metastasis of cancer. Sun et al (10) reported that miR-320a suppressed human colon cancer cell proliferation by directly targeting β-catenin. miR-320a also inhibits tumor invasion by targeting neuropilin-1 and is associated with liver metastasis in colorectal cancer (11). However, Xu et al (12) reported that miR-320a was upregulated two- to 14-fold in prostate cancer cells, and may exhibit an oncogenic function in prostate cancer. Recently, Xu et al (13) revealed that miR-320a was a potentially valuable biomarker for diagnosing older females with gastric cancer. However, few studies have investigated the clinicopathological value and prognostic significance of miR-320a expression in breast cancer.

Paraffin-embedded invasive breast cancer samples from 130 patients (mean age, 55.7 years; range, 34–87 years) were obtained between January 1999 and December 2002. A total of 15 paraffin-embedded in situ breast carcinoma tissues were collected in 2011. All tissues were obtained from Huashan Hospital of Fudan University (Shanghai, China). None of the 130 invasive breast cancer patients received chemotherapy or radiation therapy prior to surgery. The study was approved by the ethical committee of Huashan Hospital, Fudan University (Shanghai, China), and all patients provided written informed consent.

A total of 102 (78.5%) invasive ductal carcinomas, 15 (11.5%) lobular carcinomas, eight (6.2%) medullary carcinomas and five (3.8%) mucinous adenocarcinomas were identified among the 130 invasive breast cancer samples. The clinical tumor lymph node metastasis (TNM) stage of each cancer was based on the World Health Organization guidelines (14), and the histological grade was classified according to Scarff-Bloom-Richardson grading (15). All 130 cases were followed-up after surgery, and the final date of follow-up was December 31, 2008. The mean duration of follow-up was 77.5 months. The overall survival rates were calculated from the date of resection to the follow-up deadline or date of mortality. The clinicopathological characteristics of the patients and follow-up data are shown in Table I.

Chromogenic in situ hybridization (CISH) was used to detect miR-320a expression levels in 15 paraffin-embedded in situ breast carcinoma and 130 invasive breast cancer samples. Briefly, following dewaxing in xylene and rehydrating in graded alcohol, the slides were digested with pepsin. The slides were then prehybridized in a prehybridization solution at 54°C for 2 h. Following prehybridization, 5′digoxin-conjugated locked nucleic acid probes for miR-320a, U6 (positive control) and scrambled RNA (negative control) (all Exiqon, Copenhagen, Denmark) were used for hybridization at 54°C for 16–20 h. Following washing with Tris-buffered saline, the slides were incubated with a sheep polyclonal anti-digoxin antibody (Roche Diagnostics GmbH, Mannheim, Germany). Next, the slides were stained with nitro blue tetrazolium/5-bromo-4-chloro-3-indolyl-phosphate. Methyl green was used to counterstain the nuclei. Positive results appeared blue in the cytoplasm and nuclei.

The slides were scored independently by two pathologists, and positive nuclear and cytoplasmic miR-320a expression was detected. The proportion of positively stained tumor cells and the staining intensity were evaluated over 10 visual fields (magnification, ×40; BX-51, Olympus America Inc., Melville, NY, USA). For statistical analysis, with reference to Tang et al (16), total staining of miR-320a was analyzed based on the proportion of positively stained tumor cells identified, and the following four scores were used: 0, no positive tumor cells; 1, <10% positive tumor cells; 2, 10–50% positive tumor cells; and 3, >50% positive tumor cells. The staining intensity was also analyzed according to four scores: 0, no staining; 1, light blue/weak staining; 2, blue/moderate staining; and 3, dark blue/strong staining. The staining index (SI) was calculated using the following formula: SI = staining intensity × proportion of positively stained tumor cells. Using the aforementioned method, the expression of miR-320a was scored as 0, 1, 2, 3, 4, 6 or 9. An SI score of 4 was selected as a cut-off value based on a measurement of heterogeneity with the log-rank test statistic with respect to overall survival (16,17), and the expression levels of miR-320a were defined as high (SI≥4) or low (SI<4).

To further evaluate whether low miR-320a expression was associated with the progression of breast cancer, we analyzed the correlation between miR-320a expression levels and the clinicopathological characteristics of 130 invasive breast cancer patients (Table II). It was found that miR-320a was downregulated in patients with a larger tumor size (P=0.046), more advanced clinical staging (P<0.001) and increased lymph node metastases (P<0.001), as well as the presence of distant metastasis (P=0.006). However, no significant differences were identified between the expression levels of miR-320a and age (P=0.164), histological grade (P=0.745), menopause (P=0.697), human epidermal growth factor-2 (HER-2) expression (P=0.290), estrogen receptor (ER) status (P=0.684) or progesterone receptor (PR) status (P=0.352).

ROC curves were used to compare the sensitivity and specificity of miR-320a expression with commonly used clinicopathological prognostic biomarkers (ER, PR and HER-2). The survival state of patients was used as the classification variable, whereas ER, PR, HER-2 (negative/positive) and the expression scores of miR-320a were used as the test variables. An area under the ROC curve of 0.7–0.9% was considered to present improved discrimination, whereas an ROC value of 0.5% indicated no discrimination (18). The ROC areas for miR-320a, ER, PR, and HER-2 were 0.710, 0.517, 0.549, and 0.574%, respectively. This result revealed that compared with routinely applied clinical prognostic biomarkers, miR-320a alone is a more reliable predictor for invasive breast cancer prognosis (Fig. 4).

Breast cancer is a complex, heterogeneous disease and, thus, an urgent requirement remains to identify more effective biomarkers to predict patient prognosis. Over the past decade, an increasing number of biological parameters have been identified as being involved in the prognosis of breast cancer (23). ER is important in the carcinogenic process, and acts as a powerful prognostic factor for breast cancer patients (24). PR, an estrogen-regulated gene, exhibits a function in the ER pathway (18), and the presence of PR is associated with a lower frequency of metastasis. HER-2 is a member of the epidermal growth factor receptor (EGFR) family (25), which has also been used to predict the prognosis of breast cancer (26,27). However, according to the results of the current study, ER, PR and HER-2 exhibited no prognostic value for breast cancer patients, which was consistent with the results of previous studies (18,28,29). These observations, however, appeared to be inconsistent with those that suggest ER, PR and HER-2 may predict clinical outcome for breast cancer patients. The reason for this discrepancy is unclear and may be due to sample size and regional differences. Furthermore, this inconsistency demonstrates the complexity and heterogeneity of breast cancer. There is an urgent requirement for the identification of more effective biomarkers to predict patient prognosis.

Considering that miRNAs are only 18–24 nucleotides in length, they are robustly stable in formalin-fixed parraffin-embedded tissues. Previous studies have suggested that introducing miRNAs as biomarkers into clinical practice is beneficial, as miRNA data provides more reliable results than mRNA profiles (30,31). miR-150 may be considered as a potential prognosis biomarker in colorectal cancer therapy outcome (32). The overexpression of miR-21 predicts limited survival in patients with node-negative disease (19). In the present study, following the analysis of miR-320a expression in 130 invasive breast cancers, the correlation between miR-320a and patient prognosis was determined. The results showed that miR-320a had a potential function in predicting poor outcomes for invasive breast cancer patients. This result was confirmed using univariate and multivariate survival analyses, whereby low miR-320a expression was found to be an independent prognostic predictor of poor survival. In addition, miR-320a showed improved discrimination when compared with ER, PR and HER-2, by using an ROC curve (the ROC areas under the curve for miR-320a, ER, PR and HER-2 were 0.710, 0.517, 0.549 and 0.574, respectively). This result clearly suggests that miR-320a is a more reliable predictor for invasive breast cancer prognosis than commonly used biomarkers.

In addition to these results, the prognostic value of miR-320a expression in invasive breast cancer subgroups classified by lymph node metastasis status and clinical TNM stage were also analyzed. The results revealed that low miR-320a expression was associated with a poor prognosis in patients with clinical TNM stage III–IV and lymph node metastasis. Thus, it may be hypothesized that miR-320a may have increased prognostic value for advanced-stage invasive breast cancer. However, the subgroups of patients in this study were small and, therefore, a large study to confirm these data is necessary.

This study was supported by grants from the National Nature Science Foundation of China (grant nos. 81272387 and 81071813). The authors would like to thank the members of the laboratory for helpful discussions. 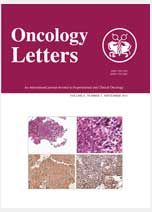