The anti-leukemia role of natural killer (NK) cells has been indicated by study of the prevention of relapse by alloreactive NK cells in hematopoietic stem cell transplantation (SCT) (1). A recent study demonstrated the involvement of impaired NK cell function in the immune evasion of leukemic cells (2). NK cells are one of the key players in the innate immune response characterized by tumor cell destruction (3). The balance between activation and inhibition mediated by different receptors controls NK cell activation (4). This balance is supposed to be regulated by the Nectins and Nectin-like molecules (Necls) family, including the activating receptor DNAX accessory molecule-1 (DNAM-1; also known as CD226) and the inhibitory axis comprising T cell immunoglobulin and immunoreceptor tyrosine-based inhibitory motif domain (TIGIT) (5). DNAM-1 and TIGIT share the same ligands, CD155 (Necl-5) and/or CD112 (Nectin-2), and these molecules are immune checkpoints, such as programmed cell death protein-1 (PD-1) and programmed death-ligand 1 (PD-L1) (3,6,7).

FMS-like tyrosine kinase 3 (FLT3), a receptor tyrosine kinase, serves a major role in the regulation of hematopoiesis (8). Mutations in FLT3, including the internal tandem duplication (ITD), which is the most common type of FLT3 mutation, occurs in ~30% of all acute myeloid leukemia (AML) cases (9,10). FLT3-ITD leads to a high leukemic burden and confers a poor prognosis in patients with AML (10). First-generation FLT3 inhibitors developed for clinical use in patients with mutated FLT3 are broad-spectrum, multikinase inhibitors and lack specificity for the mutated FLT3-ITD, which may explain their transient anti-leukemic activity, particularly when used as monotherapy in patients with relapsed disease (11). Next-generation FLT3 inhibitors, including quizartinib and gilteritinib, have greater specificity for FLT3 and higher potency compared with the first-generation FLT3 inhibitors (12). These FLT3 inhibitors have shown promising anti-leukemia effects in single agent in clinical trials, and their clinical use has been approved by the US Food and Drug Administration (13,14).

Regarding the relevance of FLT3 mutations and TIGIT, the frequencies of CD8+ T cells expressing TIGIT and PD-1 without DNAM-1 were higher in patients with FLT3-ITD mutations than in those without these mutations (15). However, to the best of our knowledge, the relevance of CD155 and CD112, cognate ligands of TIGIT, in AML prognosis and their effect on NK cell function remain unclear.

NK cells were purified from peripheral blood mononuclear cells (PBMCs) obtained from healthy donors (age, 20–65 years, three males and one female) from October 2019 to September 2021 at Research Hospital, The Institute of Medical Science, The University of Tokyo, Tokyo, Japan, using a human NK Cell Isolation Kit (Miltenyi Biotec GmbH). Cell counting was performed using a hemocytometer (Erma Inc.). The γδ T cell isolation protocol as described by Cui et al (16) was followed. Briefly, γδ T cells were isolated from PBMCs under stimulation with zoledronic acid (Selleck Chemicals) at 1 µM, in combination with 50 IU/ml rhIL-2 at 37°C with 5% CO2 for 7 days. The culture media were changed every 3 days. After 1 week of culture, the cells were harvested and CD3+Vd2T cell receptor (TCR)+ cells were determined by flow cytometry.

Lenti-X293T cells (Clontech; Takara Bio USA) were cultured in DMEM (FUJIFILM Wako Pure Chemical Corporation) with 10% FBS and 1% penicillin-streptomycin, at 37°C with 5% CO2. Lentiviral plasmid (CSII-EF-MCS) was purchased from National BioResource Project and 3rd generation system was used. Lentiviral plasmid (CSII-EF-fLuc-2A-EGFP) was produced as described previously (17). Lentiviral vector (CSII-EF-fLuc-2A-EGFP) particles (5 µg) were produced by cotransfection of Lenti-X293T cells with a transfer plasmid, and packaging plasmids pMDLg/p.RRE (3 µg), pRSV-rev (1 µg) and pMD.G (1 µg) at 37°C with 5% CO2 for 2 days. The lentiviral particles were obtained by centrifugation at 400 × g and 4°C for 5 min and collection of supernatant. Then the lentiviral vector particles were titrated in HeLa cells as described previously (18). A total of 1×106 Target cells (MOLM-13, MV-4-11 and THP-1) were transduced with the CSII-EF-fLuc-2A-EGFP lentiviral vector at a multiplicity of infection of 5. Two days after transduction, target cells (EGFP+) were harvested by fluorescence-activated cell sorting using a cell sorter SH800s (Sony Corporation) and expanded for an additional 5 days.

All AML cell lines were exposed to FLT3 inhibitors (quizartinib and gilteritinib) at 10 nM and DMSO at 37°C for 0, 6, 12 or 24 h. After treatment, total RNA was extracted from AML cells using RNeasy Mini Kit (cat. no. 74104; Qiagen GmbH). cDNA was synthesized from total RNA using the SuperScript III First-Strand Synthesis System (cat. no. 18080051; Thermo Fisher Scientific, Inc.). Using the SuperScript III First-Strand Synthesis System, RT was performed at 25°C for 10 min, 50°C for 50 min, and 85°C for 5 min. qPCR thermocycling conditions were as follows: Initial denaturation at 95°C for 10 min, followed by 39 cycles of 95°C for 15 sec and 60°C for1 min. Using CFX Manager Software (ver. 2.1; Bio-Rad Laboratories, Inc.), the target gene was quantified by the 2−ΔΔCq method (19). All RT-qPCR assays were performed in triplicate. 18S ribosomal RNA was used as an internal control, confirming that its expression was consistent in tumor cell lines and was not affected by FLT3 inhibitors. CD155 and CD112 expression in AML cell lines was normalized to that of 18S ribosomal RNA. The expression levels of CD155 and CD112 after each 0, 6, 12, and 24 h exposure to DMSO or FLT3 inhibitor were divided by the expression levels of CD155 or CD112 after 0 h of DMSO administration and expressed as a ratio. RT-qPCR experiments were performed using TaqMan Universal Master Mix II, no UNG (Thermo Fisher Scientific, Inc.) and the CFX Connect Real-Time PCR Detection System (Bio-Rad Laboratories, Inc.). The following primers were used: TaqMan Gene Expression Assays (Thermo Fisher Scientific, Inc.) for CD155 (Hs.00197846), CD112 (Hs.01071562) and 18S (Hs.99999901). Details of the primer sequences were not provided by the company.

Luciferase-expressing AML cell lines were exposed to FLT3 inhibitor (10 nM), MEK inhibitor (100 nM) or DMSO at 37°C for 24 h. For the ADCC assay, AML cells were treated with 0.1 or 10 µg/ml daratumumab or control (IgG) and cocultured with NK cells at a ratio of 10:1 at 37°C for 4 h. For the direct cytotoxicity assay, AML cells were coincubated with NK cells at an effector/tumor ratio of 0–30:1 at 37°C for 72 h. Cell death was calculated from the decrease in luciferase activity, which was detected using Steady Glo (Promega Corporation). Luciferase luminescence in the samples was evaluated using a Nivo spectrophotometer (PerkinElmer, Inc.). Both assays were repeated at least thrice.

Data from The Cancer Genome Atlas (TCGA) program [https://www.cancer.gov/about-nci/organization/ccg/research/structural-genomics/tcga, (20)] were analyzed using cBioPortal (ver. 3.7.16) for Cancer Genomics (https://www.cbioportal.org/). The mRNA expression of TCGA data was set to a high value with a threshold Z-score of 1.8. The overall survival (OS) curve by Kaplan-Meier method was analyzed using the log-rank test by cBioPortal.

All data are presented as the mean ± SD. Differences between the two groups of samples were analyzed by a one-tailed unpaired t-test using GraphPad Prism version 9.1.2 (GraphPad Software, Inc.). All experiments were repeated ≥3 times. P<0.05 was considered to indicate a statistically significant difference. The statistical significance of differences in the responses due to dose variation was evaluated by P-values for the interaction term of dose and treatment in a multiple linear regression model (SPSS 25; IBM Corp.).

CD155/CD112 expression is downregulated by trametinib in AML cells

The present study subsequently examined how CD155 and CD112 downregulation in AML cells under FLT3 inhibition affects the cytotoxic effects of effector cells, including NK and T cells. Poor OS in patients with AML with high CD155 and CD112 expression in leukemic cells indicates that the interaction between TIGIT and CD155/CD112 blocks the cytotoxicity of effector cells. To test our hypothesis, TIGIT expression in NK cells was analyzed. KHYG-1 is a cell line derived from human primary NK cells (23), and flow cytometric analysis revealed that 81.4% of the cells were positive for TIGIT (Fig. 6A). Furthermore, TIGIT expression in KHYG-1 cells was unaffected by FLT3 inhibition by flow cytometry (85.1%). γδ T cells are CD3+ Vd2+ and highly cytotoxic, and the activation of γδ T cells does not necessarily depend on major histocompatibility complex antigen presentation, which makes γδ T cells a promising target for allogeneic cell transfer therapy (16,24). Flow cytometric analysis of γδ T cells revealed that TIGIT expression was restricted in 17.1% of the analyzed cells (Fig. 6B).

The present study suggested that CD155 and CD112 expression in AML cells with FLT3-ITD mutations was decreased, and cytotoxicity against these cells by NK cells was enhanced following FLT3 inhibition. The possibility of CD155 and CD112 as biomarkers of poor OS in patients with AML was also suggested.

Although therapies using FLT3 inhibitors have improved the historically poor outcomes of FLT3-mutated AML, the clinical response to an FLT3 inhibitor is temporary in most cases of relapse/refractory disease (31). Resistance to FLT3 inhibitors is derived from a number of mechanisms, including inherent mutations insensitive to FLT3 inhibitors, acquisition of mutations in the ATP-binding pocket and activation of alternative survival pathways (32). Enhancement of allogeneic immunity has received attention as a strategy to overcome resistance. Increased activity of sorafenib, an FLT3 inhibitor, which synergizes with allogeneic SCT in FLT3-ITD-positive AML suggests the possibility of alloimmune effects to overcome the resistance to FLT3 inhibitors (33). Furthermore, it has been reported that promotion of graft-vs.-leukemia activity by sorafenib through IL-15 production in FLT3-ITD mutant leukemia has the potential to cure FLT3-ITD AML (34).

In addition to allogeneic immunity, the inhibition of immune evasion mediated by immune checkpoints is expected to have a cytotoxic effect (35). The response of leukemic cells to T cell activation leads to the downregulation of T cell costimulatory ligand B7-H2 along with the upregulation of coinhibitory ligand PD-L1 to shut down T cell activation (36). It was hypothesized that this immune phenotypic switch would cause immune evasion by AML cells.

The association of DNAM-1/TIGIT, another immune checkpoint, with immune evasion has been mainly reported in T cells (37). In addition to the presence of high frequencies of CD8+ T cells expressing TIGIT in patients with FLT3-ITD mutations, a decrease in CD226+ γδ T cells and an increase in TIGIT+ γδ T cells in patients with de novo AML have been reported (38). It has also been reported that TIGIT−DNAM-1+ γδ T cells are restored in patients with AML who achieve complete remission after chemotherapy. Furthermore, the high expression of TIGIT+DNAM-1− in γδ T cells may be a biomarker of poor OS (38).

As for the anti-leukemic effect of NK cells, relapse prevention by killer cell immunoglobulin-like receptor (KIR)-mismatched NK cells in allogeneic SCT (KIR mismatched) has been reported (1). However, to the best of our knowledge, the role of immune checkpoints in NK cells has not been previously described in patients with AML. The results of the present study indicated the possible usefulness of blocking the interaction between CD155/CD112 and TIGIT for NK cell therapy and the inhibitory role of TIGIT in the anti-leukemic effect of NK cells.

The present study was funded by Japan Society for the Promotion of Science Kagaku Kenkyu hi (grant no. 20K08726).

The present study was approved by the Institutional Review Board at the Institute of Medical Science of the University of Tokyo (approval no. 30–72-A0222; Tokyo, Japan). Primary cells derived from the patients who signed informed consent form were used. 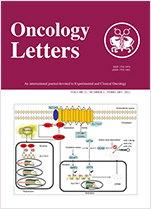