Primary retroperitoneal perirenal CIC rearrangement sarcoma is rare. The current case report presents a 69‑year‑old male patient with this pathology, including the clinical features, pathomorphology and immunohistochemistry, and CIC gene rupture detected by fluorescence in situ hybridization (FISH). Furthermore, the relevant literature was reviewed. Histologically, the tumor was composed of diffuse nests of small‑ to medium‑sized juvenile round blue cells with hyperchromatic nuclei, prominent nucleoli and occasional mitotic signs. The tumor involved adipose tissue with no obvious hemorrhagic necrotic foci. Immunohistochemistry indicated scattered expression of CD99 in tumor cells. FISH examination suggested that the CIC gene was fragmented and translocated.

CIC-rearranged sarcoma (CRS) is the most common and characteristic undifferentiated round cell sarcoma type in the Ewing sarcoma family (1), with molecular CIC gene rearrangement. CRS mostly occurs in the trunk and limb soft tissues of young individuals (total range, 0.5–83 years; mean, 27–37 years; median, 24.5–33 years), and less in bone and viscera. Histologically, the tumor is composed of diffuse and juvenile round cells, with obvious nuclear mitosis, obvious nucleoli, obvious necrosis and a small number of chrysanthemum groups. Immunohistochemistry for weak or focal expression of CD99, unlike diffuse and strong positive Ewing's sarcoma, is of certain suggestive value for high expression of Wilms tumor gene 1 (WT1) and diffuse nuclear positive for the diagnosis of CRS (2). Retroperitoneal disease is rare, with a total of no more than 10 cases reported (2,3). Le Guellec et al (3) reported in 2016 on a 57-year-old male with undifferentiated round-cell sarcoma that occurred retroperitoneally with CIC rearrangement. The histological morphology included necrosis and mitosis 11/10 high-power field (HPF), and immunohistochemistry indicated negative CD99. WT1 and E-twentysix translocation variant 4 (ETV4) were diffusively positive. In 2017, Antonescu et al (2) reported a total of 6 cases of retroperitoneal/perineal/pelvic sarcoma accompanied by CIC, without specific content. Patients with Ewing's sarcoma was referred for treatment, but 70% of CRS cases had poor response to chemotherapy and the 5-year survival rate was 44%, significantly lower than that of ES (2). The present study reported a case of CIC rearrangement sarcoma in retroperitoneal perirenal tissues and analyzed the clinicopathological and molecular characteristics in comparison with the literature.

A 69-year-old male patient was admitted to the First People's Hospital of Xiaoshan District (Hangzhou, China) in May 2021 due to left lower abdominal mass persisting for one month. One month previously, the patient had noticed a painless mass in the left lower abdomen and slight abdominal distention had been present but no hematuria. On examination, the abdomen was soft and a huge mass was palpitated in the left lower abdomen, but there was no tenderness and no migratory dullness. The serum levels of tumor markers were as follows: Carcinoembryonic antigen (CEA), 2.51 µg/l (reference range, 0.00-5.00 µg/l); CA125, 15.9 kU/l (normal, <35 kU/l); prostate-specific antigen (PSA), 0.735 ng/ml (normal, <4 ng/ml); alpha-fetoprotein (3rd generation), 1.85 µg/l (normal, <10 µg/l). Routine urinalysis was normal. Computed tomography (CT) scan of the urinary system indicated a large irregular mass of soft tissue shadow in the left retroperitoneal perirenal area, ~15.0×10.0×9.5 cm in size (Fig. 1). The tumor was wrapped around and squeezed the kidney and changed its appearance, and it was closely related to the left adrenal gland, psoas major muscle and the surrounding intestine. Multiple lymph node metastases were noticed around the mass and abdominal aorta, and soft tissue shadow was observed in the left middle and upper ureter traveling area. Ultrasound-guided needle biopsy of the retroperitoneal tumor was performed two days after presentation.

Four grayish white strip puncture tissues were obtained, measuring 2.0×0.3×0.2 cm. The tissue was fixed with 4% neutral formalin and embedded in paraffin, and 4-µm serial sections were prepared that were subjected to H&E staining and envision immunohistochemical staining and specific staining and fluorescence in situ hybridization (FISH) examination.

After conventional preparation of paraffin sections, H&E staining and microscopic observation, histological analysis indicated that the tumor was composed of small- to medium-sized juvenile blue round cells diffused into nests (Fig. 2) with hyperchromatic nuclei and prominent nucleoli (Fig. 3); mitotic images were occasional, with little or no cytoplasm and a high nucleo-plasma ratio. There were scattered apoptotic bodies between tumor cells, clusters of eosinophils in areas and scattered lymphocytes. Homogeneous eosinophilic stroma was seen around the nestlike tumor cells. The tumor involved adipose tissue with no obvious hemorrhagic necrotic foci.

The patient was diagnosed with primary retroperitoneal perirenal CRS.

CRS is a type of undifferentiated round-cell sarcoma with molecular CIC gene rearrangement. The morphology and immunohistochemistry findings are similar to those of Ewing sarcoma and such lesions have been diagnosed as Ewing-like sarcoma or undifferentiated round-cell sarcoma in the past. In 1996, Richkind et al (4) proposed t(4; 19)(q35;q13.1) changes, and in 2006, scholars began to report t(4;19)(q35;q13) and t(10;19)(q26;q13), resulting in a fusion gene dominated by CIC-DUX or CIC-DUX4L (5). The most common pairing gene for CIC gene fusion is DUX4, which is located at 4q35 or 10q26.3. CIC gene and non-DUX4 gene fusion were detected in only ~5% of cases. These fusion genes include FOXO4, LEUTX, NUTM1 and NUTM2A, and recently, CIC-NUTM1 rearrangement variants have been reported to be more common in the central nervous system (6). At the same time, differences in clinicopathological morphology, immunohistochemistry, molecular genes and therapeutic prognosis were observed between these diseases and Ewing sarcoma, which was introduced by the World Health Organization as a new chapter of undifferentiated small round-cell sarcoma of bone and soft tissue in 2020 (7).

Regarding the clinical features, CRS tends to occur in young individuals, with an age range of 0.5–83 years (3,8) and an average age of 27–37 years (median age, 24.5–33 years) and a slight male prevalence. According to mass case reports, CRS mainly occurred in soft tissues in 85.5% of cases, parenchymal viscera in 11.7% and bone tissue in 28% of cases, among which location in the soft tissues of the trunk and limbs was most common (2) and tumors located in the retroperitoneum were reported in <10 cases (2,3). In 2016, Le Guellec et al (3) reported on a 57-year-old male with undifferentiated round-cell sarcoma with CIC rearrangement in the retroperitoneum. The histological morphology included necrosis and mitosis 11/10 HPF, and immunohistochemistry indicated negative CD99 and diffuse strong positive WT1 and ETV4. In 2017, Antonescu et al (2) reported a total of 6 cases of retroperitoneal/perineum/pelvis sarcoma accompanied by CIC, without specific content. Tumors located in the gastrointestinal tract caused retroperitoneal symptoms/signs, including abdominal mass, abdominal distension and abdominal pain, and tumors occurring on the surface of the body as rapidly growing, painless masses that may be accompanied by ulceration; Tumors occurring in the urinary system may exhibit changes such as hematuria and abdominal pain, while intracranial tumors may cause symptoms/complaints such as headache and vomiting. Imaging examination typically indicates the following: Ultrasound displayed irregular mass shadows with low echo. CT revealed low-density or isodensity masses and MRI and 18F-fluorodeoxyglucose positron emission tomography frequently indicated necrotizing, high-metabolic soft-tissue masses (9).

The pathological features are as follows: Microscopically, CRS consists of small- to medium-sized round or oval juvenile cells and the tumor cells are nodular, lobulated or have a flake-like distribution. The tumor cells have bare nuclei or sparse cytoplasm, the nucleo-cytoplasm ratio is high and it is common to observe irregular nucleolar shapes, coarse chromatin or vacuolar changes; furthermore, nucleoli are obvious and mitosis is easy to observe. Spindle-cell changes may occur in 10% and epithelioid or striated muscle changes are rare. Extensive map-like hemorrhagic necrosis or mucinous changes of varying degrees may be observed in the tumor, while chrysanthemum-shaped cluster structures are rarely seen (10). Regarding immunohistochemistry, the expression degree of CD99 varies, with focal, multi-focal weak positive or no expression. Studies suggested that CD99 was focal positive in ~85% of cases, which was different from the strong diffuse positivity in Ewing sarcoma. Diffuse nuclear positivity with 70–95% WT1 expression had suggestive value in the diagnosis of CRS (2,11). In the study by Siegele et al (12), DUX4 was diffuse nuclear positive in CIC-DUX4 sarcoma, with a sensitivity and specificity of 100%. CRS was also reported to have the following features: E-twentysix-related gene (ERG), TLE1 and CD56 positive, and occasionally desmin, S-100, MUC4, EMA, CK (AE1/AE3) and calretinin local positive (1,3).

CRS should be differentiated from the following diseases: i) Retroperitoneal malignant lymphoma-the round tumor cells are diffusely arranged in a sheet-like structure, but may be distinguished by immunohistochemical expression of lymphoma-associated antigens; ii) Ewing's sarcoma or other sarcomas of the Ewing family-the morphology and immunohistochemistry overlap with CRS, but based on EWSR1-FLI1, EWSR1-ERG, BCOR and the expression of other related genes, it may be differentiated from CRS; iii) leiomyosarcoma–histologically, the well-differentiated tumor cells are fusiform and the nuclei are large and hyperchromatic when poorly differentiated, with coexistence of multinucleation and pleomorphism. Immunohistochemical expression of SMA, desmin and H-caldesmon is positive; iv) high-grade myxoid liposarcoma-it is composed of small round proliferative cells with uniform morphology, occasionally with multiple vesicular adipocytes. Tumor cells expressed S-100 and the Ki-67 index was higher. DDIT3 gene-related translocations were detected by FISH; v) Malignant mesothelioma-in small round-cell mesothelioma, the cell morphology is juvenile. However, at least two positive markers of mesothelioma were expressed among calretinin, CK5/6, vimentin antibody and mesothelioma antibody, while CEA, CD15 and CD117 were negative; and vi) poorly differentiated/neuroendocrine carcinoma-poorly differentiated epithelial cells have a nest-like structure but are positive for epithelial/neuroendocrine markers and do not exhibit CIC rearrangements.

The current treatment of CRS is based on Ewing sarcoma, which is mostly treated with surgery, chemotherapy, radiotherapy and targeted therapy (13), but 70% of CRS cases respond poorly to chemotherapy (2) and the 5-year survival rate is 44%.

In conclusion, the present study reported another rare case of retroperitoneal perirenal CRS in which the tumor was composed of small- to medium-sized blue rounded immature cells in nests with prominent nucleoli. On immunohistochemistry, the marker CD99 was scattered positive and FISH examination revealed CIC gene rupture and translocation. The clinicopathological features, diagnosis and differential diagnosis, biological behavior and prognosis of these tumors were discussed.

BH and JY drafted the manuscript and conceived the study. HL was responsible for the collection and analysis of case data and literature. BH revised the manuscript and interpreted the data. BH and HL confirm the authenticity of all the raw data. All authors agreed on the journal to which the article has been submitted and agreed to be accountable for all aspects of the work. All authors read and approved the final manuscript.

The patient provided written informed consent for the case study to be published. 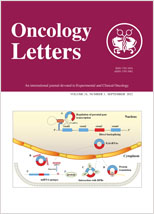