Caveolin-1, -2, and -3 are the principal proteins of caveolae, the vesicular invaginations of the plasma membrane. Recent studies suggest that caveolins play an important role in cellular signaling and, possibly, in tumorigenesis. We examined the expression of the three caveolins in azoxymethane-induced rat colon adenocarcinoma and normal-appearing colonic mucosa, and also in human colon cancer cells with inherently different proliferation rates. Expression of caveolins was assessed in experimental rat colon adenocarcinoma and normal-appearing colonic tissues by RT-PCR, immunoblot and immunohistochemistry. Expression of caveolin-1, -2, and -3 at protein and mRNA levels in human colon cancer cell lines Caco-2, HT-29 and HCT-116 was assessed by immunoblot and RT-PCR, respectively. While caveolin-1 was overexpressed in all experimental adenocarcinoma tissues by comparison to normal-appearing colonic mucosa at both the mRNA and protein level, caveolin-2 was expressed equally only at the mRNA level in both tissues. Immunohistochemical analysis of experimental rat colon tissues also revealed a similar pattern with caveolin-1 being overexpressed in adenocarcinomas as compared to normal-appearing colonic mucosa. Caveolin-1 protein expression was observed in HT-29 and HCT-116 cell lines but not in the Caco-2 cell line or the macrophage Raw 264.7 cell line. Caveolin-1 mRNA expression was evident in all colon carcinoma cell lines tested; however, caveolin-2 mRNA was found only in HT-29 and HCT-116. Caveolin-1 protein and mRNA transcript levels in human colon cancer cell lines were observed to be concordant with the growth rate of the cells, and followed the pattern of HCT-116 > HT-29 > Caco-2. Taken together, our results indicate that caveolin-1 is overexpressed in experimental colon adenocarcinoma by comparison to adjacent normal mucosa, and its expression in human colon cancer cells is directly associated with the growth rate. 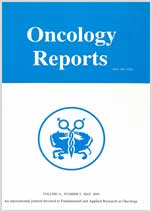