MicroRNAs (miRNAs) are endogenously expressed RNAs 18-24 nucleotides in length that regulate gene expression through translational repression by binding to a target mRNA. It is thought that the expression level of miRNAs, which act like antioncogenes, is frequently reduced in cancers because of chromosome deletion and epigenetic changes. Since the processing of miRNAs has been characterized to be enzymatic in nature, the expression levels of miRNAs are closely associated with the activity and levels of such enzymes. Here, we found that miRNA 143 and 145 expression levels were extremely reduced in colon cancer cells and commonly in the other kinds of cancer cells tested. The transfection of each precursor miRNA into the cells demonstrated a significant growth inhibition in human colon cancer DLD-1 and SW480 cells, and ERK5 was determined to be the target gene of miRNA 143. Since the presence of genomic loci of the miRNAs was confirmed by PCR in the cell lines and the precursor miRNAs exhibited a growth inhibitory effect in DLD-1 and SW480 cells, the early processes such as transcription and enzymatic modification from primary miRNAs to precursor miRNAs seemed to be commonly disturbed. These findings indicate that the miRNAs 143 and 145 could become good tumor markers and provide an important clue in the study of the mechanism of oncogenesis involving miRNAs. 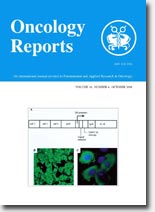